Long ago, in the land of Flanaess, an evil demoness founded a cult dedicated to exploring evil in its most elemental forms. This cult was based in a temple just outside the village of Hommlet in a vile shire known as Nulb. Soon, this cult ruled the region with tyranny; times of chaos and violence ensued. Hard-fought battles were waged and the war was eventually won by the good armies of nearby lands. The temple was razed, the villains were imprisoned, and order was restored. The temple itself faded into distant memory... until now. Recently, bandits have begun patrolling the roads outside Hommlet and wicked forces are rumored to be afoot, converging on the ruined temple at Nulb. Their purposes for such meetings are as yet unknown.

Finished hobgoblin caves map for The Keep on the Borderlands mod for The Temple of Elemental Evil.

This mod updates the unfinished map for the hobgoblins in the caves of chaos for The Keep on the Borderlands mod by co8 for The Temple of Elemental Evil.

To install, extract the folder into your ...\temple of elemental evil\modules\toee\art\ground folder and overwrite the existing files. 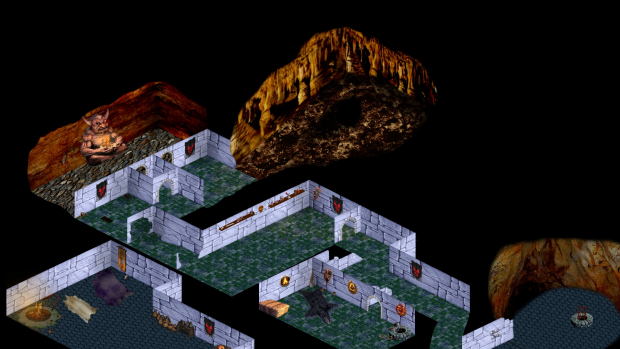