SuperTuxKart is a completely free kart racing game featuring the mascots of many open source projects. STK itself is open source and students and hobbyists are encouraged to experiment with it. You can make your own karts and tracks in Blender and use them in game. There is an active community that is constantly making new additions and refinements to the game. STK has been actively developed for over 8 years by our team. If you are a C++ programmer, an artist, translator, musician, or sfx designer you can get involved in the project.

We can now reveal how many GSoC slots we asked for, and ultimately how many we got, along with some more detailed statistics on the distribution of proposals. The mathematically aware of you may see that one proposal was withdrawn, thus lowering the total number to 79. 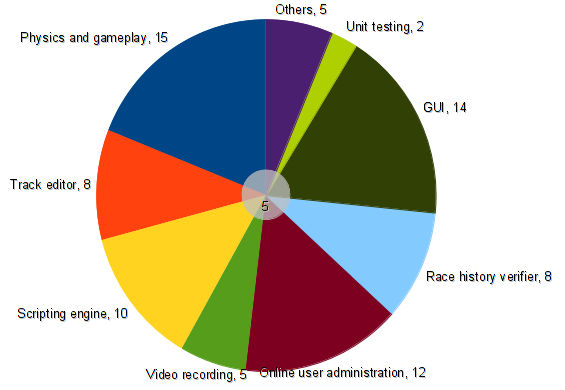 The mysterious number in the middle is our slot count. It might not be placed pixel perfect, but I assume students won't draw delusional conclusions from that. ;)

Now implicit from this is that 74 proposals will not be accepted, and hopefully those involved will understand there can be various reasons for why their proposal weren't among the chosen ones. The obvious one is that some may simply have had better proposals. The not as obvious one is that theoretically, the top 5 proposals could be for the same category, with the result that we would most likely have to choose only the top proposal and then go to proposal #6 to find another good one for another category. That is not exactly what happened, but the principle is that even having a good proposal may not land you the slot if someone else had an even better one for the same thing.

But I'd like to point out that not being selected among this year's SuperTuxKart GSoC students does not mean we don't want your contributions. On the contrary, if you find time and can do some things outside of GSoC you can gain some experience and also help us out quite a lot even if the scope of what you do is more limited. Obviously we will have to focus on mentoring the 5 students we select, but we do welcome anyone wanting to contribute and can probably find some time to answer questions that may arise.

Speaking of contributions, we recently had a student and GSoC applicant supply us with a rewritten camera, which has been on our wish/todo lists for a long time. The previous camera had one notable design fault, so getting this code fixed was very welcome. The new camera may still contain some rough edges, but we'll try to smoothen things before releasing a stable version of the game. Thanks a lot to divvy81.

Vlj is still wrangling with graphics code, and among other things he implemented recently in that regard is texture compression, which makes the game consume a lot less video memory than before. In some situations this may improve performance significantly, though you should expect that it will still not be the lightest game around on various resources. We do try to accommodate for a lot of hardware, but there are certain requirements we expect most will be able to meet to some degree.

Anyway, I should probably quit while ahead (or behind, depending on view) and not prolong this post any further, so there you have it folks. Expect another post after the 21st announcing the selected students for Google Summer of Code 2014!

Intro and upcoming GSoC Finally I got to writing another blog post, and this time I'll try to sum up the latest couple months of work and also inform...

So! Still around I see? Good, because as always there's some interesting things going on.

We are proud to announce the release of SuperTuxKart version 0.8.1.

Windows program for batch installing SuperTuxKart Addons. Currently rough around the edges. I am open to your constructive criticism and questions.

Patches supertuxkart v0.7.3 so it has the updated help and also has the html pages added. The actual mod game changes (new powerups/weapons/karts) are...

A triumph of community-based and non-commercial game development!