Spin Deluxe is a puzzle with cool physics and unique exciting gameplay. You have to think hard in order to beat the game. Become a master of the world of Spin Deluxe and control its physical laws and properties to bring back the light of its lost Sun!

As usual Buyers can “Pay What you want” starting from a minimum of $1 and choose, if they want, to support charities and good causes with part of their proceeds. This time INDIEGALA has decided to support victims of the earthquake which damaged Emilia Romagna region of Italy.For this reason part of charity share can be donated to sustain Croce Rossa Italiana (CRI) in its fundraising for Emilia Romagna. The other part will be given away for another important mission: supporting AbleGamers a foundation dedicated to bring greater accessibility in the digital entertainment space so that people with disabilities can gain a greater quality of life, and develop a rich social life that gaming can bring. 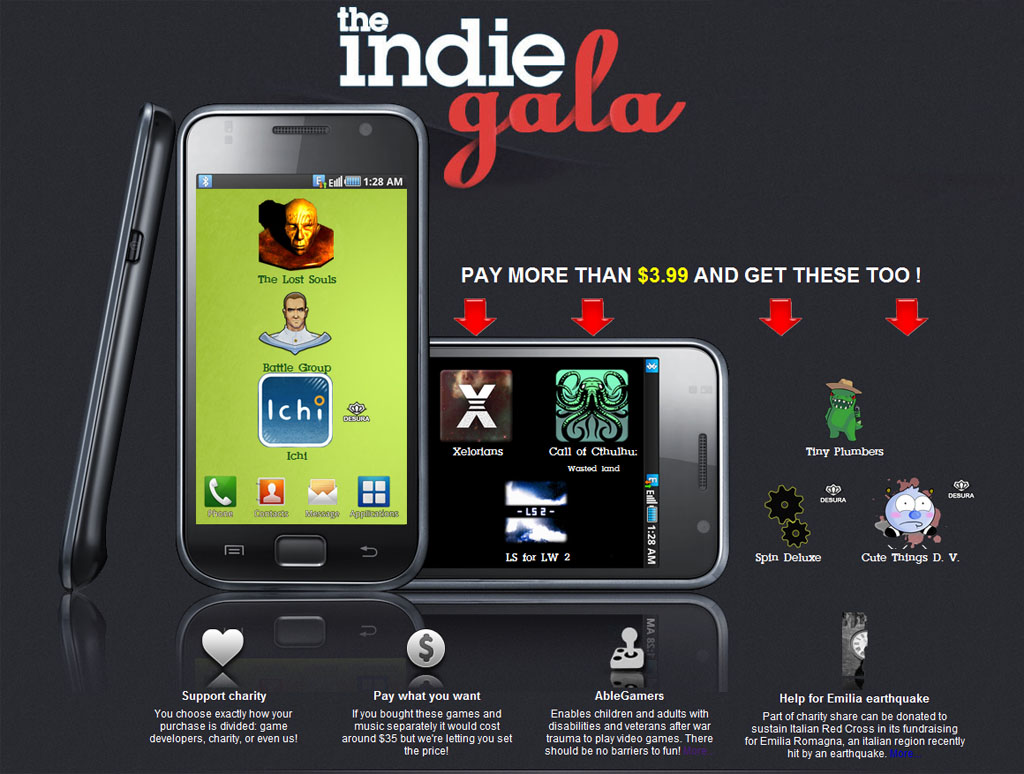 Pay what you want for
The Lost Souls:
A great “Escape the Room” horror game with high quality graphics, many scary scenes and some puzzles to Solve. The game is about a unfinished ritual and that becomes the player goal to finish it. Platform: Android

Beat the average to get also:

Xelorians: "Storyline, graphics and game pace makes it one of the best space shooters on the market. Go and get it." - androidzoom.com. Platform: Android

Call of Cthulhu: Wasted Land:
A great turn-based strategy/role-playing game based on the award winning Call of Cthulhu RPG. "..you MUST download today...Awesome..." Guardian. Platform: Android.

Little Stars for Little Wars 2:
Form your strategy, conquer enemy systems, and claim victory for your forces!Little Stars is a space real-time strategy (RTS) game, where the player has a simple objective: move through the neutral star systems in order to capture all enemy systems. Once you start playing, you will lose yourself in fun levels, ranging from amusing to mind-challenging! Platform: Android

Spin Deluxe:
A puzzle with cool physics and unique exciting gameplay. You have to think hard in order to beat the game. Become a master of the world of Spin Deluxe and control its physical laws and properties to bring back the light of its lost Sun! platform: PC Windows ( Desura )

TinyPlumbers:
Tony has a job to do... Save princesses to pay the bills. All across the eight realms Bosses have aquired valueable Princesses. Help Tony secure a bright future for Tiny Plumbers Inc. by "Rescueing" these damsels and exchanging them for piles of coins and mini-games at the Princess Mart!Tiny Plumbers is an ultra low resolution 2D platformer where the levels are a combination of user created and procedurally generated content.platform: PC Windows, Mac

Finally, those who beat the average will get a secret bonus EP and LSLW2 Dreaming-in-the-space original soundtrack!More information on the IGMobile 2 is available at its official website or via its Facebook and Twitter pages.

And don't forget! The average increases in the very first hours, so grab it now while the price is still low!
Contact:IndieGala
support@indiegala.com
Indiegala.com

Level Editor In The Next Patch!

Spin Deluxe is now released! Be first to download demo version for free or buy full version for only [ppbranchg16480|2158price]!

Our official site is now open! Link is in the full description.

Ok, so this game seems to be seriously broken. Part of the time, it just gets completely stuck, other times parts of the game environment just doesn't get drawn, and often windows/requesters get drawn on top of other requesters, or just linger on top of the playing field, and while clicking the options gives visual feedback that the option was, in fact, clicked, nothing happens.

Yeah, is your Java version actual? It requires at least Java 6 to execute normally.

I've never met such bugs. Could you please send me your system specs?

I got stuck on the Hard Worker level. It needs very tight timing. It would be nice to have cheat codes or something.

This level can be done in different ways, at least three. Try using other method. But I agree, it's hard and requires right timing. You can also try using pause(spacebar) to apply formulas without hurry.

I got over it already. I think the lower bar could have a bit lower fricition though to make the level easier.

Doctor Gester! I'v been search for your e-mail, but I haven't found it. Post me to slash01@inbox.ru, I have an offer of cooperation on this game!