SkySpy is the first App from Centremaps (Ordnance Survey Premier Partner). Launched in December 2013, SkySpy is a unique quiz game for iPhone & iPad that tests your knowledge of Great Britain from above! Using Aerial Imagery this free to download app features some of the UK’s most famous sites and landmarks which YOU have to uncover. 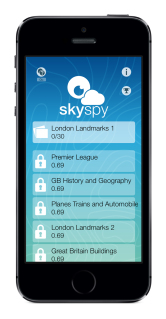 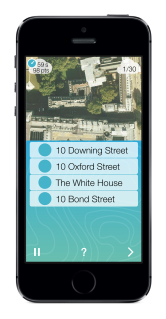 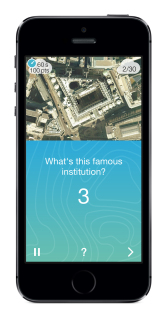 SkySpy with my little iPhone. Something beginning with…

Jan 28 2014 News
MP Harriett Baldwin had no trouble finding her way to a business that is really putting West Worcestershire on the map. She visited Laser Surveys to unveil an innovative mobile phone application called SkySpy and MiniMap, a waterproof walking map.

She called in at Laser Surveys of Leigh, Worcester to unveil an innovative mobile phone application called SkySpy.The app – a game which involves identifying famous UK landmarks from aerial photos – is the first the MP has been asked to launch during her travels across the county and signals a new era for one of the most successful businesses in her constituency.Laser Surveys has also introduced MiniMap, a waterproof, foldable A3 sized map that uses traditional Ordnance Survey 1:25,000 scale walking map data and can be personalised as a gift for friends and family members who enjoy walks. Mrs Baldwin, who was presented with a special map highlighting walks around her constituency office in Malvern, said: “I was delighted to be invited to come and help the company launch two innovative new products.“Laser Surveys really is the Google Maps of West Worcestershire. SkySpy is the very first app that I have been asked to launch and I am sure it will be entertaining for inquisitive children and adults.“I was also very impressed with the personalised waterproof walking map. I look forward to helping this innovative company meet their goals for growth and obtain superfast broadband.”Laser Surveys’ core business is digital mapping and teams travel all over the county gathering geographical data. One of its most famous projects was designing the transformation of Horseguards’ Parade in central London into a beach volleyball court for the London 2012 Olympics.

SkySpy has finally launched! There is also a great competition with a chance to win an iPad Mini. Find it now in the App Store.

Pending at the App Store

We're still anxiously waiting on Apple to push through our game onto the App Store. It's been nearly a week since we were notified that it is under review...

The in-app Wikipedia links are a great addition to a compelling game...

EscapeVR: Trapped Above the Clouds Puzzle