Although Silverfall: Earth Awakening is a stand alone "add-on" in the series, those who have never ventured into this wondrous universe may feel initially a little out of place as they walk through these strange lands of magic and technology but once you start to understand the universe that you play, it will soon become second nature. For those who have played the original Silverfall series, your original character must be level 45 or greater if they are to continue the next saga of this tale.

Kyiv's Games have also added a few new twists and turns in this current installment by including two new races, the powerful race of Dwarves and the mysterious Saurian's who are both completely different races, each with their pros and cons. Match that with a plethora of new items from magic to weapons and a wide myriad of new skills and spells, this title will definitely be a breath of fresh air to those lovers of the original title or lovers of the RPG genre.

The creators of the Silverfall universe have once again successfully melded both science and magic into this RPG title which will take experienced gamers between 25 to 30 hours to successfully complete. Joining forces with other NPC's who will accompany you on your adventure, players are not limited to class and as you grow within the game, so does your skills and powers.

Graphically, Silverfall : Earth Awakening is rather impressive on the PC with highly detailed background environments with characters that move with a real world and sometimes otherworldly grace. An engaging soundtrack with a plethora of strange sound effects, gamers will easily be drawn into this creative and exciting universe.

This article was written by Mr.Pixelpirate on Jeuxvideo french gamer site, published on the 24th of January 2008. Ive translated it by the great help of Altavista's babelfish service. Thank you for reading! Ed 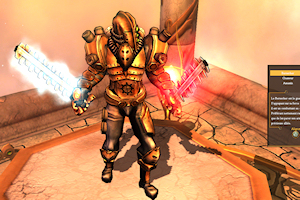 Back at the end of 2006, Silverfall had divided crowd. Equipped with a true graphic identity and rich and interesting contents, this hack' N slash alas simply lacked of completion. Several corrective patches had quickly rectified the mischief, regulating the problems of camera in particular. But the evil was already made, and the game of French Monte Cristo had remained in the shade of Titan Quest. However, Silverfall obtains today an extension which, in addition to a new campaign and improved contents, corrects many defects of the unpatched(!) version of the original game. However with the latest patches, the original Silverfall game has gone trough a great improvement phase as well. Regarding Silverfall, but most especially in the case of the add on, the developers stated to have payed attention to the comments of the players on the forums, and to have learned the lesson from it. The preview version of Silverfall: Earth Awakening that we are holding in our hands pushes us to believe them.

Earth Awakening is an extension for Silverfall, but in order to increase the chances of successful debut of its new baby, Monte Cristo chose to make a stand-alone of it. No need for the original game to plunge yourself in this new adventure: while the followers of Silverfall will have the possibility of importing their hero and all his attributes, the new players will begin with a character from level 45. At the character creation, they will be able to choose one of the two new playable races: dwarves and the lizardmen. They will have to also choose one of the two well-known alignments of the players of the first setting: the way of nature or that of technology, and will be seen equipped by consequently chosen starting equipment. Let us recall indeed that, far from adopting a traditional universe of heroïc-fantasy, Silverfall was located in a steampunk context which conferred much originality to the game. Earth Awakening picks up again the storyline where its predecessor had left it. The player takes up from now on the duties of Lord of the city of Silverfall, which evolved/moved according to its inclination: become industrial megalopolis or harbour of nature, it is from now on a symbol of prosperity. But peace remains precarious and destabilized permanently by the new conflicts which has emerged around the capital. The unsuspecting character has to finally engage: the Lord High Admiral Von Skromel. Here is the starting point of the new setting which, a length equivalent to the 2/3 of the original adventure, should ensure once again some long hours of play.

What strikes at the first glance in this extension, it is the completely reconstructed interface. Panels of retractable icons, drop windows, many short cuts, entirely skeletal camera: all became simple and easy, and lends a total comfort of playing experience. There is even a possibility of controlling the character using the directional keys. The panels of abilities and the inventory has been also re-worked again. It was essential besides, that from now on Earth Awakening has to include high level skills, as well as a new extremely greedy possibility in slots of back bag: the kraft. The player will indeed have access to skills of craft industry which will enable him to manufacture its own weapons and armours, like enchanting them in order to confer various bonus to them. That was another wish of the players whom the developers knew to listen to. The kraft requires materials which can be found regularly on the corpse of the monsters. And sometimes to further enhance the crafting system, it is necessary to call upon a new NPC ready to transform the raw materials into more refined versions. Let us quote finally a last evolution which will undoubtedly be appreciated experts: your character will not need anymore to subscribe a life insurance by this blasted goblin to avoid the respawn near naked and the race towards his tomb. It seems that is one of the privilege to be a King!

For the remainder, Earth Awakening preserves the play mechanisms of Silverfall. The player keeps the possibility of recruiting mercenaries in order to devote itself to the monster bashing in the joy and good mood. There is on the other hand, still no chance to have a look at their skill development, and it is also sometimes difficult to precisely manage their behavior in combat: on this regard, it seems unfortunately that the IA hardly evolved. The graphic face lift has treated most generously the lights, and its noticeable especially at the time of the combat, explosions and effects of particles improved, which ensure a true pyrotechnical festival. But it is in any event an aspect on which the developers hardly needed to re-examine their copy: the use of the concealment shading brings a true personality to the game. It's a pity that its been always needed a strong machine to benefit from it fully. It remains to be mentioned that Earth Awakening will have like its older brother a multiplayer mode, not implemented in the preview version. In any case, by remaining consistent in style and atmosphere, this add on makes Silverfall a very much pleasant experience to play.

Thank you for reading, Ed

Silverfall: Earth Awakening -- Leipzig, Thursday August, 23th 2007 -- This interview has been conducted by Gorkk for GameGrob during the Games Convention...

Graphically, Silverfall : Earth Awakening is rather impressive on the PC with highly detailed background environments with characters that move with a...

With this mod you'll have an improvement readable text in the game, making a bigger fitting text for the game. This is a real unofficial improvement text...

When play Silverfall or Silverfall Earth Awakening in high resolution, it is very difficult to see the tiny, brown default mouse cursor in the game. Especially...

This small mod changes either the User Interface colour OR the rate as which rare items drop. Enjoy! Readme is in the zip file.

where can you get the Silverfall add on?

You could buy Silverfall Earth Awakening from a store when it was out, otherwise check online retailers; Walmart/Amazon/Gamestop/etc

It is Stand Alone; you can import your character from Silverfall (v1.17) if they are beyond level 45 is my understanding.