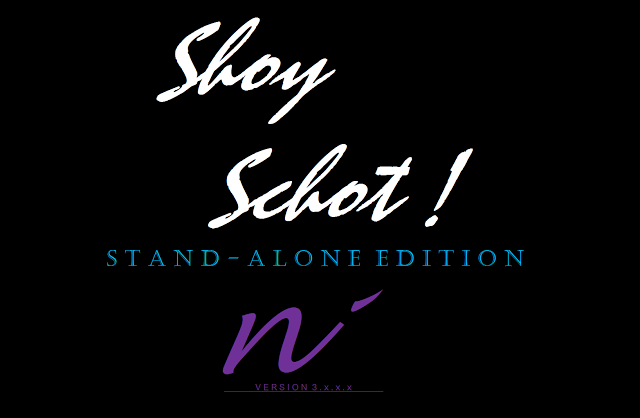 Shoy Schot! is an additive, console-based, strategic card game created in C#. Starting out as a simple minigame about flipping cards and gaining ownership over the game board it soon blossomed into a full fledged card game with a mega ton of customization options and gameplay modes. And now, with Shoy Schot! nui, it has finally reached its ultimate form!

Shoy Schot! nui retains all the features of the previous release (Shoy Schot! Stand-Alone Edition Version 2.0.1.9) which included (but not limited to): 5 main Rule Sets to play in their own Free Play modes; an Arcade-like mode called Unlimited Deck Mode; a Best Of… Mode to play consecutive matches; a robust Tournament Mode for serious play; 22 Accomplishments to earn; Stats pages that kept over 80 stats; a Personal Rank Card to share and compare with other Shoy Schot! players; 8 profiles for same computer use; and Virtual Gaia Games Matching!, a completely separate matching minigame.

New features to Shoy Schot! nui include (but not limited to): a Custom Rule Set Maker, where players can build their own custom Rule Sets; Endless Tower, which is a survival mode; a Score Attack Mode; Arcade Challenges where players can try to conquer all 40 challenges; a single player tournament mode called Arcade Battle Campaign, a Tutorial Mode, where players can learn the basics of the card game in a new, more interactive way; a new mini-game called Clementine; 26 more Accomplishments to earn; more stats; and slew of secrets and tweaks.

Again, Shoy Schot! nui is a PC game from Virtual Gaia Games and will be releasing on Sunday, December 29th, 2013. It will be downloadable from: Virtualgaiagames.blogspot.com for free when available. We hope you all download and enjoy our game!

If you enjoy Shoy Schot! nui, help us spread the word about it by joining our Thunderclap campaign: Here!

Check out screenshots of the game here or on our Flickr page: Here.
(Go to Options in the slideshow and uncheck embiggen)

I am proud to announce that Shoy Schot! nui, Virtual Gaia’s much delayed

Electronic Card Game, is done and has entered into Final Testing!! I’m even more proud to announce the Release Date of the game: December 29th, 2013. That’s right, Shoy Schot! nui will go live next Sunday for the economical price of FREE!!

The next thing I want to cover is: What exactly Shoy Schot! nui? I think I’ve alluded

So, what does that mean? Just that the game grew big enough to warrant a separation. It feels different, it’s noticeable bigger and slicker. That said, Save Data from any previous version of Shoy Schot! is 100% compatible with Shoy Schot! nui. Also, it will retain SS! SAE version numbering and still be released as Version 3.0.0.0.
A more formal Press Release will be issued a little later that will include more information and a full features list, but until then here is a short list of new features including in the upcoming Shoy Schot! nui:

Again, Shoy Schot! nui will release next Sunday, December 29th! While Shoy Schot! may not be a graphical powerhouse by any means, it's a load of fun! So... Get excited! Tell a friend! The last game of 2013 is Coming Soon!!
Seeya when we release!!

Today Players will be able to experience a nice sample of what Shoy Schot! nui has to offer in this DEMO VERSION of the game!

This is a Demo Version of the electronic card game: Shoy Schot! nui. Enjoy! (PC only)

Mine Base: Chess & Checkers Turn Based Strategy