Project Earth is a single player and multi player game. It will detail the story of the human races struggle to survive an attempt at genocide by a lethal alien foe. Following these events the player will be thrust into the battlefield of earth viewed through the eyes of it's many survivors.

Welcome to another Earth 2015 update, this time around the team here are happy to announce our first free competition.

OMStudios and the team behind Project Earth 2015 would like to take this opportunity to announce...

Our first public competition, which will allow one member to choose a name for one of our future weapon concepts which we created. The successful member whose name is voted the most popular in the final vote will have their name in the games final release credits,

We had hoped we would have been able to provide proper prizes for this comp but we are unable to provide anything bigger at this point in time. However, the winner will be invited to help the team when the game goes into the testing phase, both for Multi-player and Single Player.

The weapon first up on the name block is a model created by Daniel Smith (Choczy) he dubbed it the Okel 36. 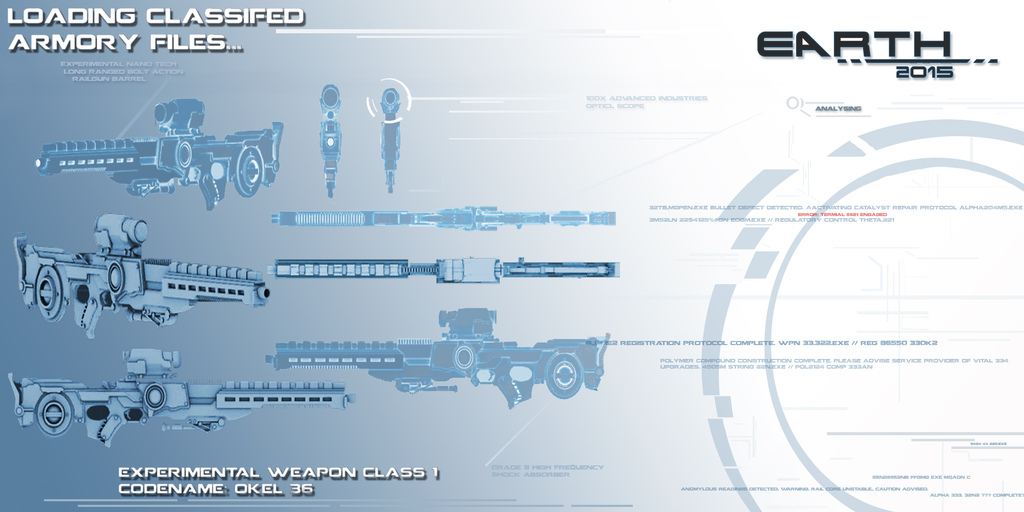 Finally the link below is where the voting and also the name suggestions are to be posted.
=> Om-studios.com

Thanks everyone and good luck,
-- Foxhound, Project Lead Earth 2015

Only 24hrs remaining for the competition, voting begins Saturday morning over on the forums...

"Daniel Smith (Choczy) he dubbed it the Okol 36"
On the weapon picture its called "Okel 36".

That competition is a good idea to involve the community!
I shortly thought about a good name. But I just remebered some known weapon names from other games... Its not so easy like expectet.

Yeh its meant to be Okel 36. We have other names, but we wanted to really get the community involved, seen as this game is been pretty much built from the ground up.

all i have to say can't wait for this mod. take your time i'll be waiting :)

@ Caseria - Thanks mate. We appreciate those comments

mm... for some reason this come to mi mind:
Soulreaper ?

It has a ring to it :) I saw you posted your suggestion in our forums, Keep them coming