Pimps vs Vamps is a 2D, turn-based, survival shooter with roguelike elements (such as randomized stats, damage and character names). The game takes place in an old mansion overrun by badly-dressed vampires. In order to exterminate them the player (also known as Pimp) uses his arsenal of weapons (a pistol, a rifle, a shotgun and a freeze-ray).

Thanks for voting and helping Pimps vs Vampires on it's quest to become the 2022 Indie of the Year. You are now in with a chance to score some free games. Help this game secure more votes by embedding the widget (or link) we have included below on your favorite sites. 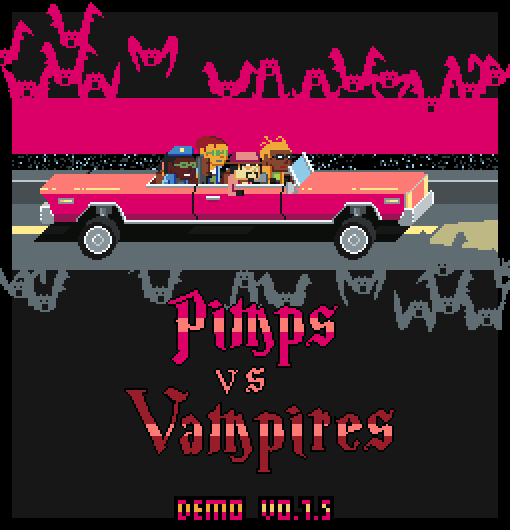 
We are proud to present our first alpha release. In the last few weeks we have improved A LOT about this game. You can download and see it for yourself but for example:

We made some changes:

Action Points and weapon costs have been cut in half. After FTJ a lot of people complained about vampires jumping in and out of the player's field of view. Starting now enemies that are close to the player (but not in sight) generate a ripple effect, for a brief moment, revealing their location but not their true kind.

In terms of bug fixing we can say that 99% of the bugs present in the jam version are no longer a problem.

During the past week we held a small party on twitter, called #PixelLouvre, and asked friends and followers to draw and submit paintings that can be featured in the game. Over 30 paintings were submitted by 20 awesome individuals, And it was awesome. All the paintings are in the game!

The game is currently in open development, each alpha release being uploaded here, on indieDB.
If you pre-order the game now you will be given access to the BETA builds. Also you receive a neat digital codex containing background information about the story (to pre-order, you can press our classy button, which took us 3 hours just to get the tiger print right.)

A new weapon has been added to Pimp's arsenal: The flamethrower

Pimps vs Vampires v0.1.3, version that was developed for F*ck this jam. Note: it does not feature procedural map generation. If you cannot see the crosshair...

A quick update: Development on Pimps vs Vampires will resume after October. I went full time indie and since PvV will take a while to be completed, I shifted my focus to a coffee-break TBS game: Bacioiuciprian.com

Hey guys, we will update the indieDB page with news and a few more details in the comming weeks. Both me and Thomas (@Grundy) have been busy with both PvV and other work. Stay tunned and thank you for the support.

YEAH YEA YEEEAAAAHHHH!!! Only thing the game is missing is a cane-sword! But really, I love the game. Good work guys. Also, A wallpaper would be cool.

No wallpaper eh? We can fix that:
Grundysoft.com
Have fun and thanks for the kind words.

Cane sword, now that's an idea worth looking into, especially for the melee aspect of the game!

Just a quick gameplay video for anyone who wants to see one! Youtube.com
Great game, cheers guys.

Damn, when the full version is released. My Ho's are going to have to work overtime so I can procure a copy.

Great work so far guys. Keep it up.

Thanks Adrian.
With that helmet and hat you appear to be quite the stylish pimp yourself.
This may turn out to be a game that's right for you.
We'll try to keep up the good work. In fact: we even try to aim higher.

Hehe hi James. Guess @Thomas's tweets brought you to the page. Finishing up on tasks for the next demo.

In Your Realm Roguelike

One Thousand Cubes Up Roguelike