Tyrian is an arcade-style vertical scrolling shooter. The story is set in 20,031 where you play as Trent Hawkins, a skilled fighter-pilot employed to fight Microsol and save the galaxy.

In February 2007 the source code for Tyrian was licensed for a small group of developers to re-write it in C, for a project named OpenTyrian, licensed under the GNU General Public License. Following that announcement, in April 2007 Daniel Cook announced the free availability of his Tyrian artwork under generic liberal terms.

Excellent game and this version is good since it doesn't require dos and runs good, but there is at least one issue. The aspect ratio should be 4:3 except it's stretched wider, and it also looks like it's that way in the screenshots. In this game it's not as much of a problem since it's a vertical scroller, and I even played a while myself before noticing it, until I started looking at circular objects more, but I still think it should be at the correct ratio. Also when I tried this with Windows 7 the fullscreen option didn't work. For now I'll just stick with the dos version for Tyrion 2000. Dosbox has the option to fix the aspect ratio. This game is still great either way.

Certainly the best shoot 'em up-- no, the best arcade game I have ever played.

The best shoot 'em up game ever created, period.

Tyrian is so awesome. Thanks for the remake. :) I played it a lot when i was young.

These ARE the original graphics... how are you supposed to play in hi-res when the original game was in 320x240 pixels? You don't have a choice but to stretch things out.

They have a bugtracker if you'd like to submit an issue; I doubt they'll ever come here to read comments.

Add to that, the game is more or less in a completed state (it doesn't crash, and you can play it on multiple platforms), it's highly unlikely they will fix anything more up to that point.

The rest is up to the community I guess. Who's up for a Tyrian 2 remake? :)

One of the best old school shoot em ups for the PC, along with Raptor. Excellent music, lots of weapons, a nice upgrade system and keen graphics.

Works great with a generic USB controller too.

Oh yeah, Raptor was nice too!

Anyone else have problems with it acting like the up arrow is stuck down? Makes this unplayable.

Awesome game. It has great controls, good graphics (for a 1995 DOS game that is) and a memorable soundtrack. I also like the ship and weapon upgrade system and the fact that it is possible to take several hits before losing a life, which makes it a less hardcore game than some others of this genre.
After playing the shareware version a gazillion times back in the 90's it feels good to finally being able to finish this little gaming gem. 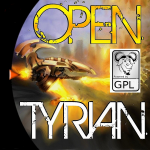