Oil Rush is a real-time naval strategy game based on group control. It combines the strategic challenge of a classical RTS with the sheer fun of Tower Defence. Fight the naval war between furious armies across the boundless waters of the post-apocalyptic world. Pump the ever-so-precious black gold by oil rigs, capture platforms and destroy the enemy in the sea and in the air. Be ingenious to unlock super technologies and quick to send your squads straight into the heat of the battle!

Oil Rush development is full steam ahead to Steam! A lot of fixes, new improvements. Check new music tracks that will drag you even deeper into post-apocalyptic atmosphere of this flooded world.

Our development studio is like a boiling kettle right now: everybody is so excited as the things are going towards the release at fast pace. 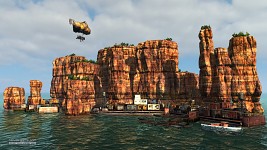 I LOVE the concept :)

it is not a concept, it is a real-time screenshot from the game.

I am not sure but maybe he was talking about the whole game concept, gameplay.

Would you want beta users to join the play test this Saturday?

No, we need gamers who aren't acquainted with the game.

Throw a cookie out when you release on Steam and I'll bite. The game looks interesting from the couple of videos you have up. It's reminiscent of the flash game Phage Wars and the indie game Eufloria.

Nice update. Thanks! Keep it up guys. The game is rocks.

Nice update guys. Played the beta at a LAN with a small number of people. Good fun. Would be really great to have some more maps and a few 6 & 8 player maps.