Join us on a mindbending trip to a world that no man has ever seen before. Discover truth and beauty in a place that follows its own rules and live an alien existence full of meaning and surprises. You are NOWHERE. You are NOW HERE. Still in early alpha stage, NOWHERE aims to be a holistic first person experience set within a mystic cosmos, focusing on emergent player-driven storytelling, strong social AI and high replayability through the use of procedural content, combining gameplay elements of exploration, survival, strategy, communication and adventure.Our story arc aims to explore human topics such as family, science, religion, politics, culture and history as well as shed light on existential themes such as fate, choice and free will, seen through the unfamiliar lens of individuals in a post humanist, post singularian alien society.

In this article I provide a chronicle of our turbulent terrain development, what lessons I've learned and what's next. Also, why tetrahedra (probably) rule and voxels (mostly) drool.

It was nearly one and a half year ago that we showcased an early tech alpha of NOWHERE that had organically growing and sculptable terrain.

I had put high hopes in this approach, but found that, while triangle meshes allowed fine control over geometric features, they were difficult to simulate efficiently in a way that would keep the surface 2-manifold.

The last alpha version that we released took a few minutes of CPU time to grow a single coral like structure. The program takes several snapshots from the same mesh at different stages and exposes them as separately rotating triangle meshes.

Knowing that I wanted to generate worlds far larger than that, running out of ideas in what ways initial geometry could be seeded, and hitting upon other shortcomings of triangle meshes, I embarked on a long and perilous journey to explore the rabbit hole of alternate geometric representations.

But first, let us visit the ultimate (and retconned) list of requirements that I made for NOWHERE's terrain:

Over the course of this project, whose beginnings started several years ago (back then, what the gameplay would ultimately be was completely unclear), I tried more than a handful of solutions. The first one was the most obvious choice:

You can clearly see what influenced it. But I wanted more freedom of expression. The next approach glued prefabricated models together, similar to how Besiege works:

While that covers scaffolding nicely, it's neither particularly organic nor terrain oriented, in fact it scaled rather badly, and would only allow for rather puny scenes.

Then I tried mixing scaffolding and raymarching distance fields to produce a huge, if only somewhat monotonic terrain that was unfortunately completely unalterable and ate too much GPU time to make it a comfortable solution for low end computers (We want to make people with weaker hardware happy too):

I had some luck with Wang Tiles earlier, so I thought a 3D version of that might be interesting to try:

This ended up being more of a one trick pony. At the time I entertained the thought that terrains could not be altered, but I could not make peace with it. On the way to figuring out how to make geometry user-editable, I experimented with procedural terrain growth by extrusions, the first triangle mesh based solution:

The pesky problem with extruding triangle meshes is that it is impossible to tell when surfaces intersect, which turns the mesh into garbage; Furthermore, joining intersecting meshes is everything but trivial. I started to look into scientific papers for solutions and was made aware of Stéphane Ginier's formidable SculptGL, which does Z-Brush/Sculptris-like sculpting with support for punching holes into the topology, a rarely supported technique. I wanted the same thing for our game, and that's where my first full-on foray into triangle mesh editing started (see first video).

So in the past year I looked into voxel based solutions again, particularly Dual Contouring, and I got some rather spectacular results out of it, in terms of being able to feed it with distance field functions, doing CSG on it, running light simulation, which is why I thought this would be the ultimate solution we'd end up with. The first octree-based solution ran on the old Python engine, and despite large parts being written in C, seeding even small volumes took a few seconds too long, and editing wasn't realtime enough. Here are some screenshots from that time. Sigh. 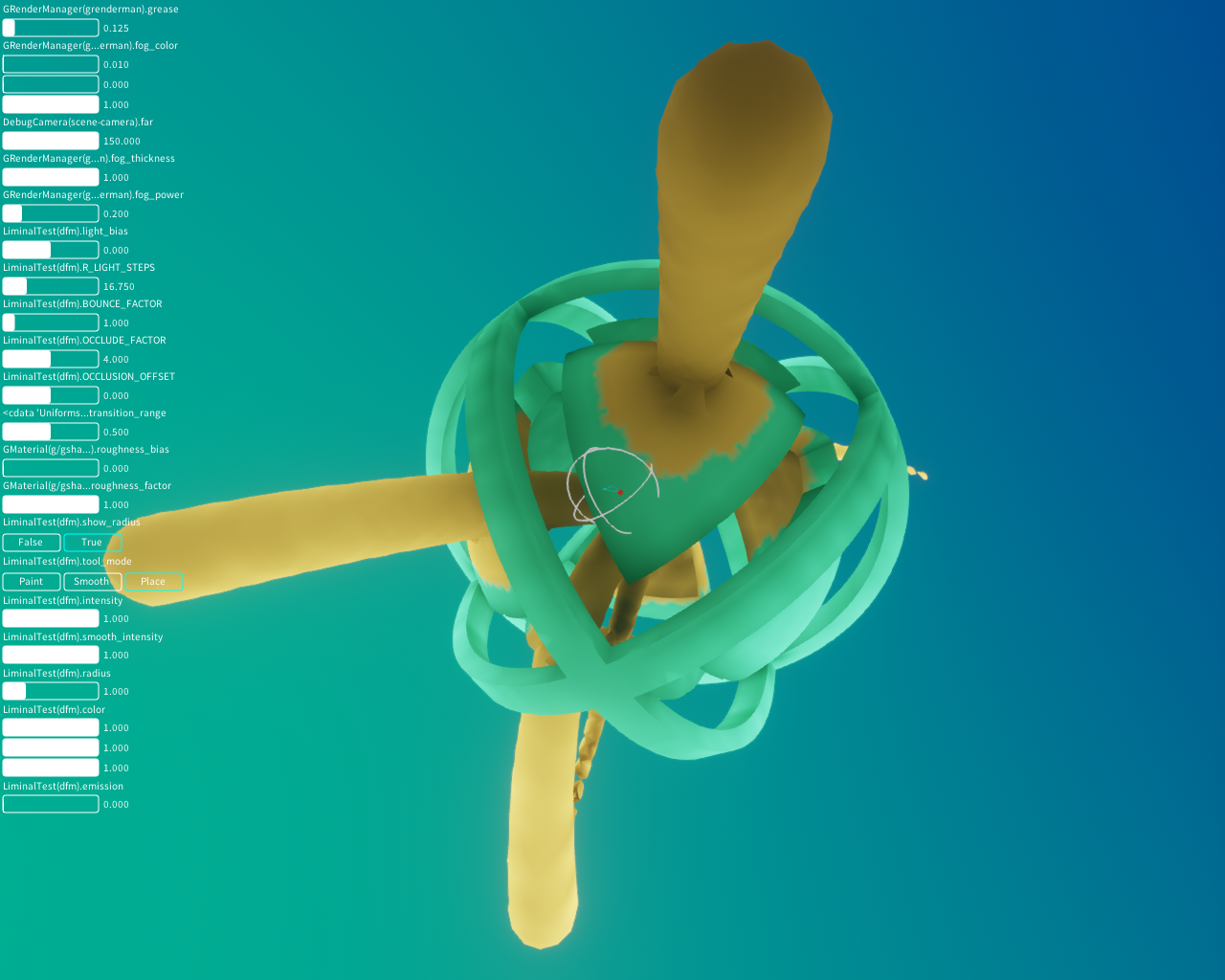 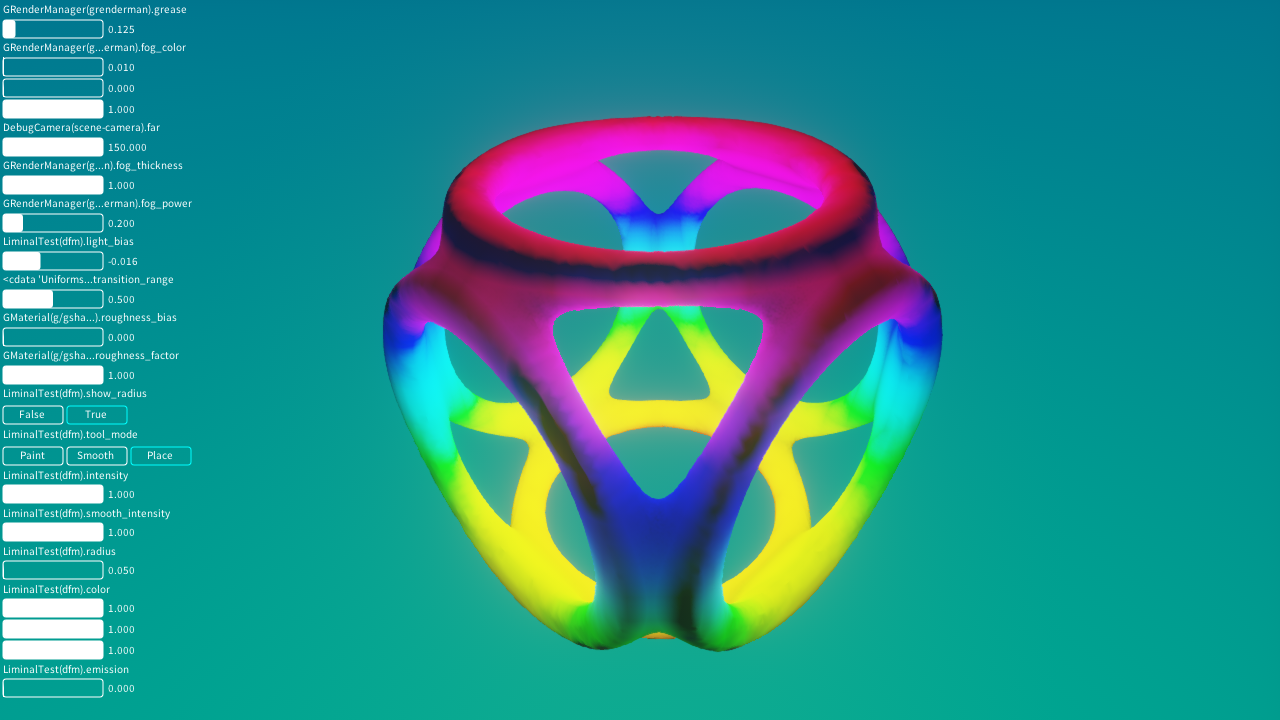 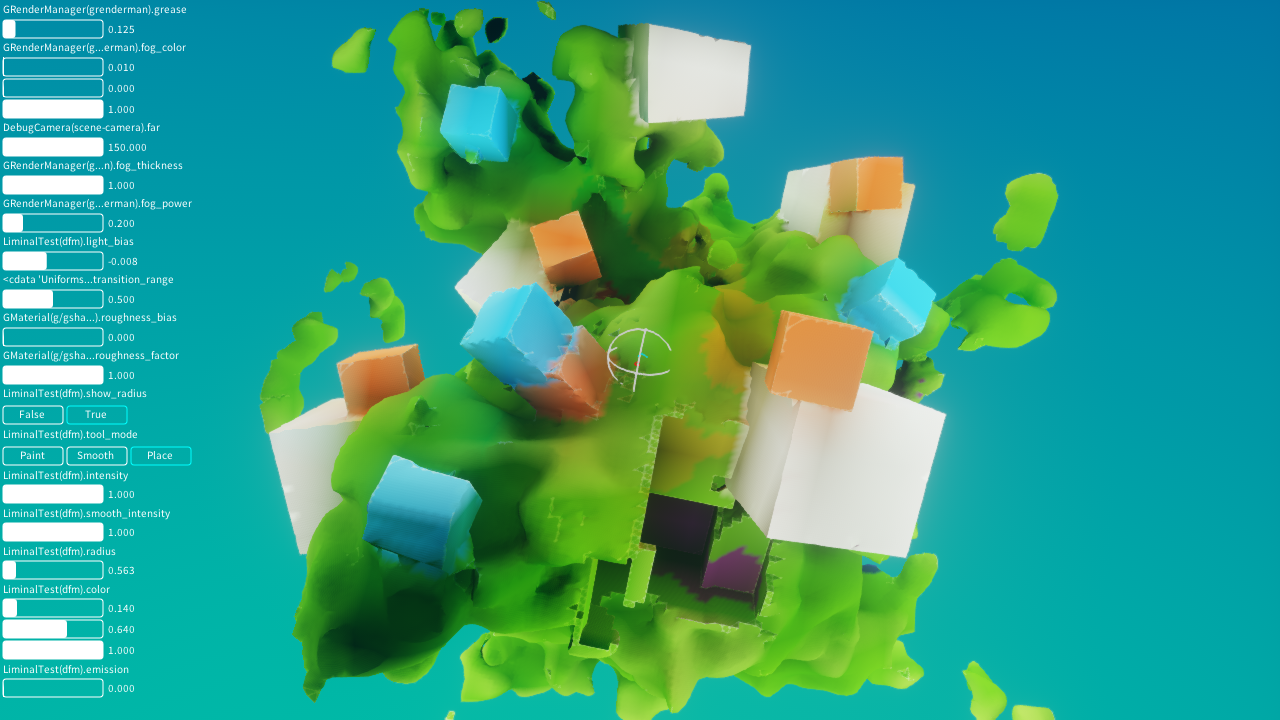 After a rewrite of our engine and experimenting with new editing paradigms in January this year, I had an insight for how to do, well, something with tetrahedral meshes, but it didn't quite click yet.

Instead, I got sidetracked into tetrahedra-based dual contouring and wrote a fast GPU-based implementation that used a grid instead of an octree, and experimented with alternate honeycombs for meshing. Things were great for a while. Descend your gaze upon this smooth animation of an implicit function:

I managed to integrate a realtime light propagation solution that ran on the same grid:

I made strides. I wrote a realtime meshing solution that meshes voxel data on the fly, completely alterable (although that's not visible in the video yet), realtime lit, at the cost of a heavily reduced draw range:

Alas, geometry representation on regular grids sucks for the same reason as shape
representation in bitmaps, the 2D analog case, and I've ultimately decided to completely give up on a voxel based solution.

Why? Behold, the long shitlist of
voxel-based data structures. If you're considering to write something with voxels, beware of the perils:

So I went to look into Tetrahedral meshes, also called "Finite Element Meshes", the solution I'm currently implementing. The idea is pretty straightforward: They work exactly like triangle meshes, except that the triangles are expanded by one dimension to form a volumetric mesh of tetrahedra, which tessellates space completely into solids and air. Tetrahedral meshes are largely undiscovered by the game development community (with one notable exception), but an old hat for companies doing structural analysis simulations (think hard core Bridge Builder) and interactive tissue surgery simulators.

Here's why I think that NOWHERE will fare much better using a tetrahedral mesh for its terrain, in comparison with the bullet list above:

This is the very last solution I'm trying, and the one we'll most likely stick with, which means that the gameplay of the next alpha will be close to Alpha 75 again, and then some.

The only regret I have is that I didn't know all this three years ago. It took a long time to look at approaches and figure out what the game needs. We could have settled for something way earlier had I been more willing to make compromises. But at least this way I can say we picked the best solution for our problem, and the game is truly becoming the kind of game we want to play.

Regarding tetrahedral meshes and related techniques, I'm keeping a lengthy list of relevant papers that may be of interest to anyone else interested in the subject here.

Leonard wrote in the Nowherian forum about our current progress with NOWHERE.

This post is partly an explanation of what's currently going on, partly an attempt to summarize the situation for ourselves.

Six more weeks have passed since I first posted about Adaptive Volumetric Meshes, which have since turned into Voxel Mesh Hybrids after some refinements...

NOWHERE - News From The Business End

Aside from all the hardcore videogame making going on, a bunch of super exciting business related events happened during the last few weeks as well. Enough...

damn I wish I had the money to back this

I *think* I understand what you're trying to do, and I think it's brilliant. It seems like you guys are throwing metaphysics, information theory, long-term thinking and a slew of other broad-spectrum concepts into a blender to make a colorful cocktail that should induce the player to ask themselves some serious questions. If I'm even half correct, there, you've got my attention, haha.

Holy damn this is trippy. Looks awesome though, keeping track of this gem.

DONT PLAY THIS ON SHROOMS !!!!!!! Otherwise it look like a original take on the sandbox genre. Tracking.

I'm not entirely sure what I just saw but it looked very impressive.