- Procedural generation: Murder mystery scenarios with a new culprit and clues each time, every play-through is unique.
- Permanent choices: NPCs, interactions, death, and a slew of other features will all persist until a new game is started. Every action counts!
- Notebook: Collect vital clues in the detective's notebook to help narrow down suspects and solve the case.
- Investigation: Interact with and examine numerous objects and characters in a number of environments in the search for more information on the killer.
- Countdown: Given a set number of days to solve the mystery, each area visited will decrement the time left, adding to the urgency of every case.
- Freedom of choice: Attempt to solve the case, or live out your remaining time doing as you please - be it fighting the law, going after gang members, or just seeing the city.
- Gunplay: Combat is generally to be avoided as a single bullet will take down the player. However, when necessary, the revolver is always available for use.
- Badges: Complete a variety of challenges to earn unique badges which directly influence future playthroughs.
- Statistics and Scores: Statistics and high scores for a wide variety of topics will persist through every game.
- Costumes: Multiple unlockable costumes can be earned in game. Play as the default male or female detective, or unlock a variety of new outfits.
- Challenges: Optional challenges unrelated to the main case are generated each game. Every challenge completed provides permanent bonuses to all playthroughs.

Noir Syndrome has finally been wrapped up and prepared for release. You can get it on April 2nd for PC, Mac, Linux, and Android! There will also be an additional bundle available directly through our site that includes the complete original soundtrack. If you still want the game to make it on to Steam, be sure to tell your friends to give us a vote on Greenlight! 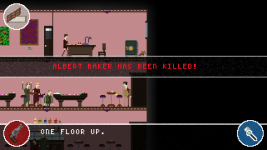 Now that the game is complete, it's a good time to look back on what's been done. One major feature that was added recently was the inclusion of different difficulties. There are now Normal, Hard, and Impossible modes. Each subsequent difficulty makes it harder to find clues and suspects while the player has to deal with reduced hunger, ammo, cash, being hunted by one or more groups, and other challenging factors. Of course, there are incentives for completing harder difficulties. Greatly increased score, as well as a number of unique badges can be earned from playing Hard and Impossible modes. 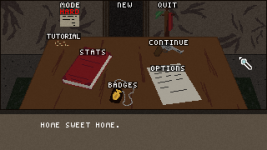 There are also a few new areas to explore that weren't in the beta. There might be some secrets or possibly even easter eggs to find throughout the game, so take a careful look at everything! 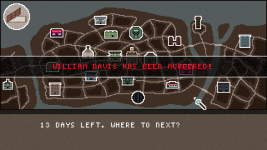 Finally, I just wanted to thank all of you for making this possible. I know I've said it before, but the support provided by everyone has really driven me to make this game the best it can be. I'll be paying close attention to it after release to see how things go as well. In the end, the roots of the game still remain. The procedural mysteries should be engaging and feel new each time. Hope you guys grab a copy when it drops on April 2nd! 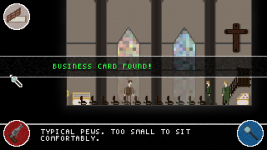 A whole slew of features added, tweaked, and fixed since the beta update. Details on all of the major points preparing for the final release.

Noir Syndrome is now up on Steam Greenlight! Check it out and give us a vote if you want to see it on Steam.

Wanna grab a free copy of the beta? Find out here.

This is not a point-and-click.

If one buy the game from any of the sources indicated on your Page, do you get a steam key?

Sorry for the late reply! Humble widget purchases do include Steam keys.

This looks like great fun! When can we expect a release?

I'd love to do a playthrough of this!

Is there any chance you could please pass out one more late invite?

This game looks fantastic and just like something I would enjoy.