Monster Prince And The Eternal Kingdom

Inspired by the 8 and 16-bit metroidvania / Zelda and specially the Monster World series, Monster Prince And The Eternal Kingdom (previously known as 'Project Explorer') is a procedurally-generated platformer with RPG elements. It's in development since september/2012 and has seen some good progress since then.

It will feature different environments, structures like castles, dungeons and more, quests and NPCs, all with a big random world to be explored by adventurers who enjoy old school platform games.

Thanks for voting and helping Monster Prince And The Eternal Kingdom on it's quest to become the 2022 Indie of the Year. You are now in with a chance to score some free games. Help this game secure more votes by embedding the widget (or link) we have included below on your favorite sites.

Robin Hood: Give and Take

Tech Demo for Monster Prince And The Eternal Kingdom!!

The first tech demo for Monster Prince and The Eternal Kingdom was released!
Check it out and go explore! 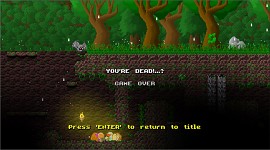 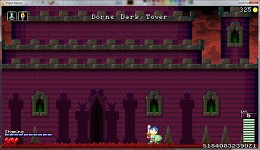 This is the 1st release for Monster Prince and The Eternal Kingdom!It's a very early tech demo, which won't feature most of what I imagine the final game to be.

It's currently a game about exploration and item acquiring / leveling up. It has currency (gold), but since you can't buy stuff there it doesn't do much.


The development began around September/October 2012 as a personal project in my spare time. It's a platformer with heavy 8/16-bit influence, specially the Sega Wonder Boy in Monster World series.

You can find more about it here and at Ferfogs.tumblr.com

Yes, the final name has been decided. Why a Monster Prince? What's the Eternal Kingdom you ask? Well, we'll find out soon enough!

The Name for the Game!

Help me choose the final name for Project Explorer! Read more for details on the story!

Some new features: gold coins and bags, visual effects (like when hit and levelling up) are shown in the new video!

Some nice new features were implemented in Project Explorer, check them out!

The first tech demo for Monster Prince and The Eternal Kingdom was released! Check it out and go explore!

3.Also on the mole mini boss are you going to give it more sounds and attack aniamtions because he seems to only havce one?

perhaps, I have the impression I'll revisit some of the art or animations in the future. That's kinda natural I guess.

2.Also do oyu plan to have a kickstarter since I think it would benfit you by giving you more popalrity?

Yes, the sounds are original, created with the sfxr tool.

About KS, who knows? Maybe in the future.

i could help you i have gms master collection

Seriously, this is looking so good. Fantastic job. :D

Thank you so much, I hope it gets better! :D

will you be having random bosses in the areas snd dungeons and will they have complex patterns 3ather than just wacking and sw8ingibg at them?

2.any chance on steam?

Twitter
Tags
Embed Buttons
Link to Monster Prince And The Eternal Kingdom by selecting a button and using the embed code provided more...

Robin Hood: Give and Take Platformer