Militopia (from Latin militaris = military and from Greek topos =place,) is a unique strategy game made for 2-4 players. Militopia is a place for battle where you can prove your true proficiency as an expert of military strategies. 1. Militopia is a realistic game (e.g. including distant combat). 2. You can play this game with your friends (2-4 together). 3. The game process is unpredictable. 4. Militopia doesn't depend on probabilities or probability to win like other computer games do. The chance to win really depends on the using of your memory and logic skills. 5. Militopia has a dynamic algorithm and it is not permanent. 6. The game characters are united in one system. 7. Join this game and compete in a Militopia tournament ONLINE. The one who will be able to win, will get the flag of the winner + and reward equal to 300 USD! With the lapse of time the REWARD will be increased.

To promote Militopia and grow its popularity (top games), use the embed code provided on your homepage, blog, forums and elsewhere you desire. Or try our widget.

"NarcoGuerra is Risk applied to the war on drugs; it’s hard, it’s political, it’s really quite good." PCGamesN Review Can you End the Never-Ending...

The development team behind the award-winning game Decisive Campaigns: From Warsaw To Paris is back with a new and improved game engine that focuses on...

Reprisal is a Turn Based Strategy game, where Players experience the story of General Axzan, as conflict between rival nations intensifies.

DC: The Blitzkrieg from Warsaw to Paris

From Warsaw to Paris… and then on to London! The development team behind the award-winning game Advanced Tactics: World War II is back with a new...

Front Wars is a turn-based strategy game. Take control of allied troops and revive the great battles of the second world war in a tense campaign against...

Welcome to March of War, the online turn-based strategy game. Your actions will shape the world! Be one of the first players to participate in a whole... 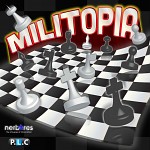