After years of combat in Vietnam, Lincoln Clay knows this truth: family isn’t who you’re born with, it’s who you die for. When his surrogate family is wiped out by the Italian Mafia, Lincoln builds a new family and blazes a path of revenge through the Mafioso responsible.

Be Lincoln Clay, orphan and Vietnam veteran hell bent on revenge for the deaths of his surrogate family

Choose your own play-style; brute force, blazing guns or stalk-and-kill tactics, to tear down the Mafia

A New Family on the Ashes of the Old:

Build a new criminal empire your way by deciding which lieutenants you reward, and which you betray

To promote Mafia III: Definitive Edition and grow its popularity (top games), use the embed code provided on your homepage, blog, forums and elsewhere you desire. Or try our widget.

Set in post-WWII New York City, The Godfather: The Game follows the player-created character's rise through a crime syndicate based on the book and film...

Milanoir is an action game inspired by Italian crime movies of the '70s. The player takes the role of a convict suddenly released from prison, looking...

Mafia is a 3D action game, played in the third person. The player assumes the role of a gangster in an American city of the 1930s, and gets a chance to...

This is the violent and chaotic journey of two men - a flawed mercenary and a medicated psychopath. Each hates the other but must work together to save...

The US President must save the Earth from alien overlord Zinyak using an arsenal of superpowers and strange weapons in the wildest open world game ever... 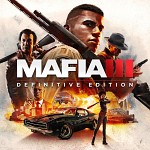