Lemmingball Z is a fighting game for linux and windows, loosely based on dragonball Z, the hit anime' And when say loosely based, i mean with a big twist' Instead off the normal characters from the anime, this game features cute LEMMINGS bashing eachothers skull in! The game is released, and new versions are always in development. 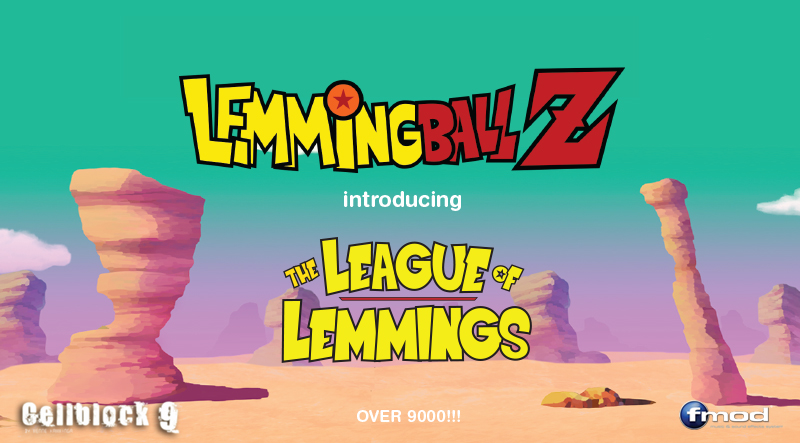 Finally we pass the magical Treshold of version 9000!

And we celebrate this with loads of news

The standards for level design have also risen a lot, now featuring elaborate and authentic anime backgrounds made with love.

Enjoy the leaps and bounds LBZ made with new lighting and particle sytems... I am sure our coder would add about 27 feature points to count up how much everything has improved, but I think its enough to say: It looks amazing!

A new state-of-art netcode will provide more precision than ever in online games.

Several tweaks to the engine give weaker systems a good boost in performance.(Unfortunately, buisness cards with low versions of openGL will still have troubles).

Since LBZ is extremely fast paced, we worked out a lot of little helps to allow the player to focus on his fight without getting his controlls confused.

And we arent even done yet - heres some new stuff to come:

Have a lot of fun with this greatest version of LBZ, one that allows to use caps and say...

To the aniversary of AF we present : Real AF - what really happened...

We are happy to anounce that the first GFX Pack update is available now!

Out of the order characters

During the overhaul of the game, I stumbled over characters that just dont feel right with the common LBZ rules

As the engine evolves, LBZ evolves as well. This means a lot of fresh stuff...

Full version of the next generation Lemmingball Z, including .exe for windows and binaries for linux. *more than 35 characters *new high end engine *automatic...

hello everybody, sorry for the late update, i've been busy...but i finally completed the version 7.0 of this game, it contains 2 new extra chars, a new...

And finally i'm back with this!! Here we have some changes: First, I've added 3 levels that i found and these are NOT created by me, as you can see Vegeta...

And finally i completed the 5th version of my modpack :D... This version contains kid gohan, mystic gohan, future gohan, goku in ssj4 version,and i modified...

This is the fourth version of the mod! it contains adult Goten, vegeta ssj4 and Lord Bills, plus i fixed some move's bugs. Enjoy!!

Hello, my windows 10 doesn't run the game. Can somebody help me?

This Is One Of The Best DBZ Games Ever!

I Say you Should Try it