Legacy of the Stars

A Retro 2D space shootem-up game that is going to be continously updated with new features, levels and more. This game is in very early stages but I want to be as open as possible with the development. The game will feature levels in many locations, from deep space, nebula, different planets, with many unlockables and even achievements. The more this game is funded by you, the more I can and will add. The initial release will be PC/MAC, with Android/IOS to follow.

Legacy of the Stars Gameplay video + Kickstarter type of Crowdsourcing!

This video is really REALLY early footage, the music and ship sprites are both placeholders until the custom stuff is ready to replace them.

Gameplay shown in level 1 is not how it's going to be in the final version, at the moment I'm in the stage of adding as much as possible, then refining it until how it's supposed to be.


Legacy of the Stars Alpha 0.1 - Indie DB
it may be a while before I post another video, but rest assured you should see a pretty decent leap in the gameplay department when I do so next.

We have set up a profile on indiegogo (kickstarter unavailable outside US) to help fund the game it self, which will help the game develop faster, as well as produce a higher quality game in the end.

If you want to help, and can do so, every contribution will be of great help, thanks for taking the time to look at Legacy of the Stars, when this game IS released, I hope you will enjoy the game as much as I enjoy making it!

Legacy of the Stars Update 1

New game, new website, new everything! Update contains very early screenshots + a video of a level I was testing. I hope you enjoy. 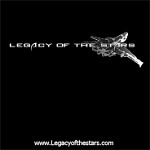 Tags
Embed Buttons
Link to Legacy of the Stars by selecting a button and using the embed code provided more...