What is Kando World?
Kando World is a indie free to play MMORPG coming to Pc, Android & iOS. The game has a oldschool visual feel while keeping up to date with features such as: Guild V Guild PvP, Open world PvP, Skill trees, Battlegrounds, Raids, Dungeons and more!

Open World PvP?
Kando will feature a OWPVP(open world pvp) server which players who are not in safe zones(towns,dungeons,etc) can kill another player and receive exp. The Open world pvp also works as Guild pvp as you cannot pvp guild mates unless you both agree to it.

Thanks for voting and helping Kando World on it's quest to become the 2021 Indie of the Year. You are now in with a chance to score some free games. Help this game secure more votes by embedding the widget (or link) we have included below on your favorite sites.

Kando World Quality Of Life Update 2.3 and 2.3b


Kando World Update 2.3 and 2.3b is one many of our testers have been waiting on for in the past few weeks when we announced it. It features mainly improvements to the game that have been requested by the tester base of the game. We have taken everyone's in game and out of game feedback and gone through it with our team to decide what was the best course of action to take. Also if your suggestion is not on the list please dont worry. It may be we just didn't have enough time to fit it in or it could be we are still working on it for future patches. And as always, if you have any suggestions please feel free to post them or if your a tester please use the in game report tool. Here is the patch notes. 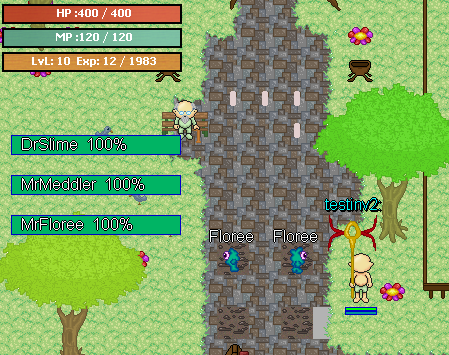 This shows off the new hp and party bars coming, there are graphics errors in this map, these are for testing purposes only

Kando World is now on Kickstarter and we can't wait to show you what freebies you can get for backing us!

We have been working hard and finally finished the new site aswell as other little updates!

Has details about all the professions that have been added to Kando World in the latest patch for testers to play.

We have just ran a Server test with our GM's and CP's aswell as a few of our players.

I WANT TO PLAAAAY haha

This looks fun, great job. Keep it up!