in Delinquency, Discipline, and Disorder

in Delinquency, Discipline, and Disorder is the story of one Elisa Augustine, a high school senior, as she tries to put in line her schoolmates in a rather unusual setting. "Studies first, romance later." has become her motto of sorts, but that doesn't mean she won't have romance as well, after all, she's expected to live longer than her classmates and do better than everyone else.

It's been forever since we posted an article or a dev blog, especially since we nuked the old Project Rothera dev blog. This is a promise 2 years in the making (not 2 years of 8 hour dev days, prolly just every weekend).

Our game, in Delinquency, Discipline, and Disorder went from vanilla dating sim to managing school organizations and events. Well, those things are part of running a student council. We left out the financial aspect of it though otherwise it's gonna end up like a standard stat raising game.

For now we have 13 (actually it'll become 12 a bit early in game) kouhais. We plan on adding more with additional funding/support/feedback. Though the potential of crowdfunding is there, we dare not crowdfund a VN/dating sim without CGs or better backgrounds.

Naturally in a school setting, students are asked to join clubs. So here are the school clubs with junior members at the start of the game. We should consider them core new members though. 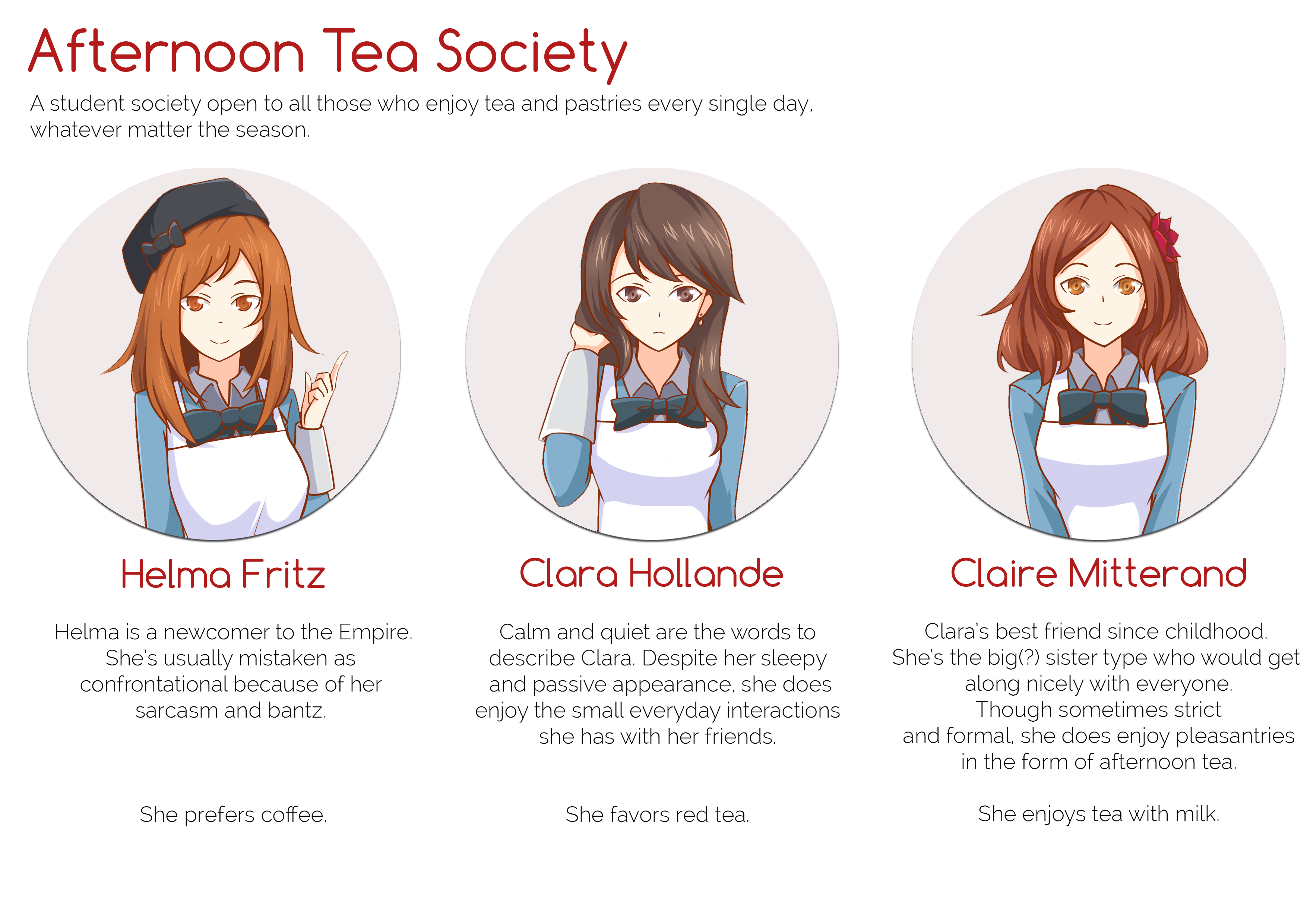 This is the main protagonist's home club. If you're the type to eat snacks and chitchat with friends after school, this is the club for you. The club also acts as some sort of support structure for new students. During special occasions, they will recreate dishes from the outside world for the sake of showing off their respective home countries' refreshments and pastries. 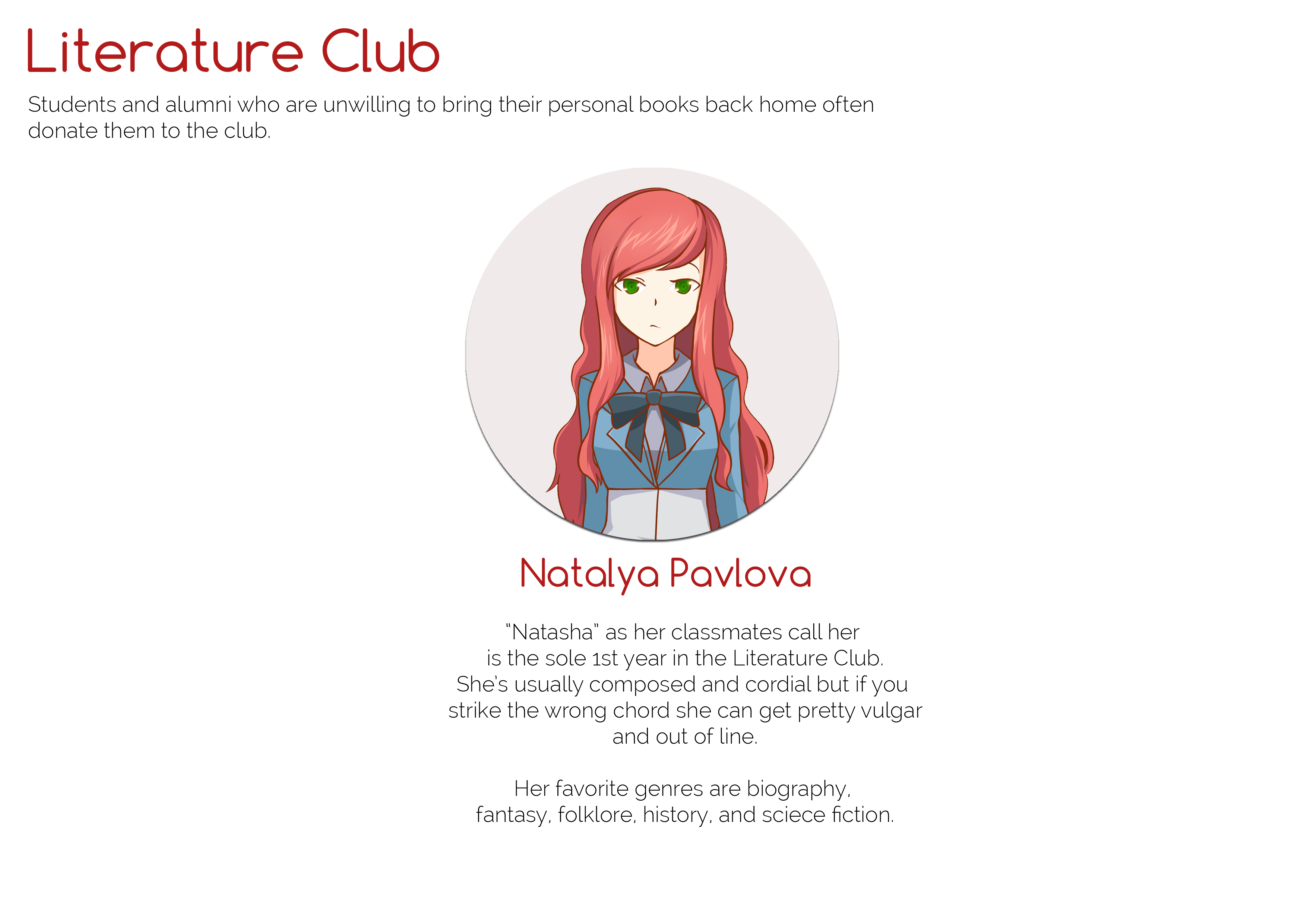 Natasha's actually not the sole member, but she is the sole 1st year who joined this term. She doesn't actively scout for new members though, considering there's only 20+ something first years in the studentry. 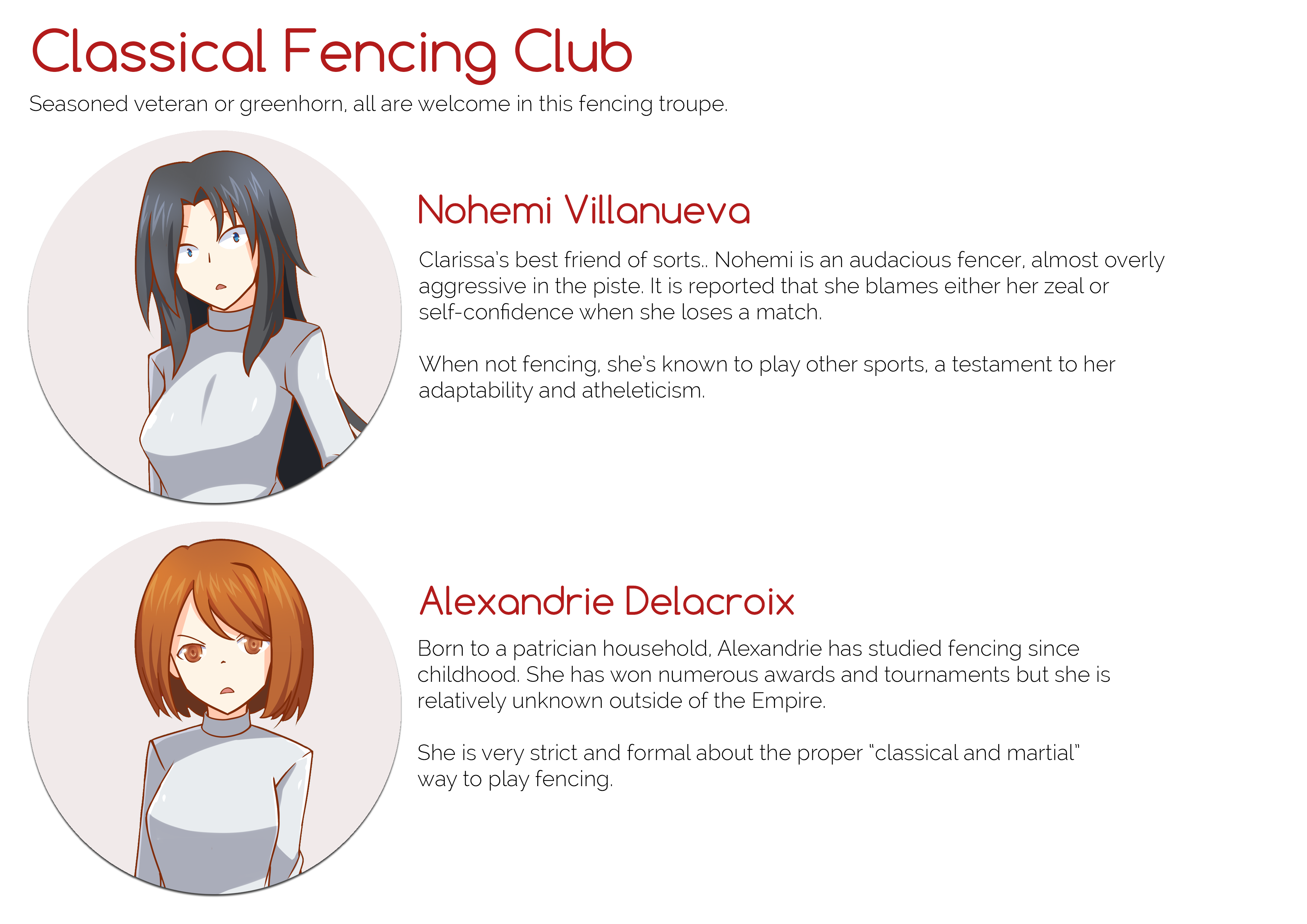 This used to be an Olympic style fencing team until we realized people with magic can't possible be allowed to join the Olympics. There are four juniors in this club, and depending on your (you, the student council president) support, they might bring the school honor or shame. Alexandrie is the de-facto team captain. 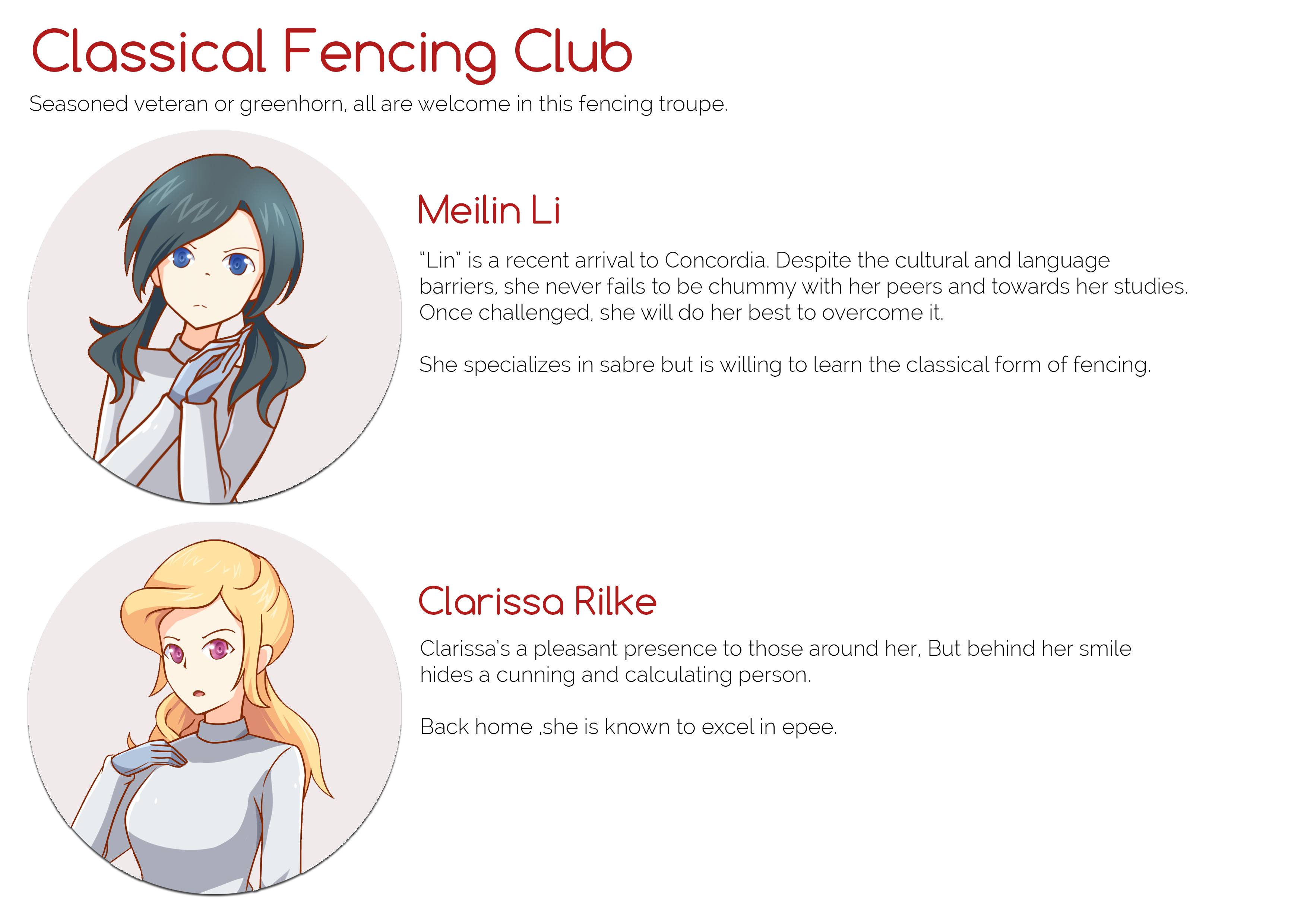 We put Clarissa and Nohemi back, I found it difficult to remove them from the script. So the previously mentioned goal of removing them and replacing them with male characters is shelved. It was a mistake to begin with. We'll just add some new guys into some of the other clubs instead. During the design update we'll probably tone down Clarissa's hairdo a bit. It looks like something a high school student will have trouble styling without a maid. (But then again she's rich maybe she does have a maid.) 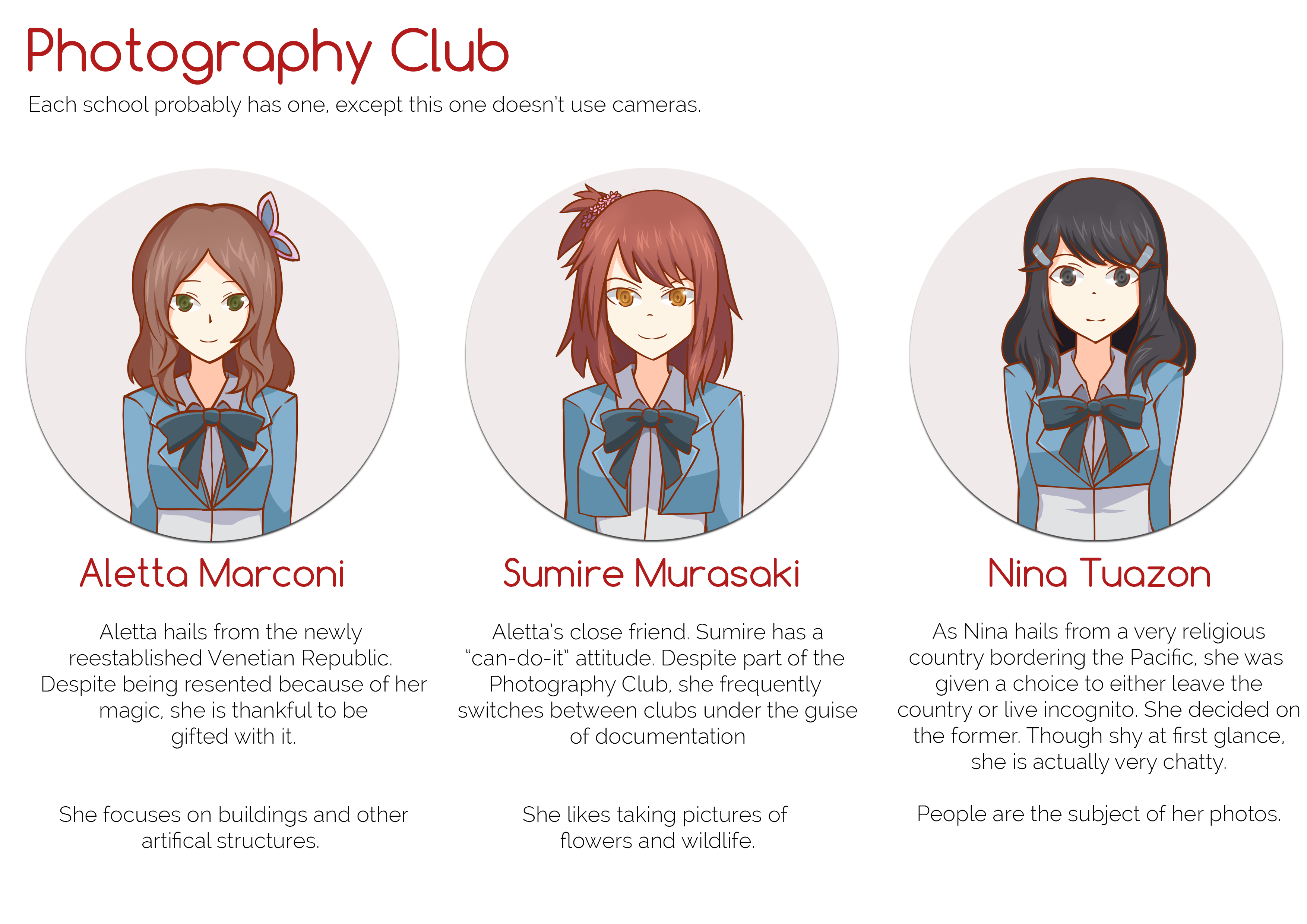 Finally we have the last of the active clubs, the Photography Club. Being a photography club in a country without the latest cameras or smartphones is a real challenge, luckily this girls have the ability to use the Imperial equivalent of the modern camera *spoilers* And oh, we finally put Nina back. You can probably guess what country she's from given her name and looks. Speaking of looks, Sumire and Murasaki are very similar colors/flowers. There is nothing of that color in our Sumire, yet. Aletta Marconi's surname comes from Marconi, a defunct RADAR manufacturer.

And oh, your student body management sim won't be complete without a student council, right? And yes, the council also has new members. Actually, everyone in your council is new. 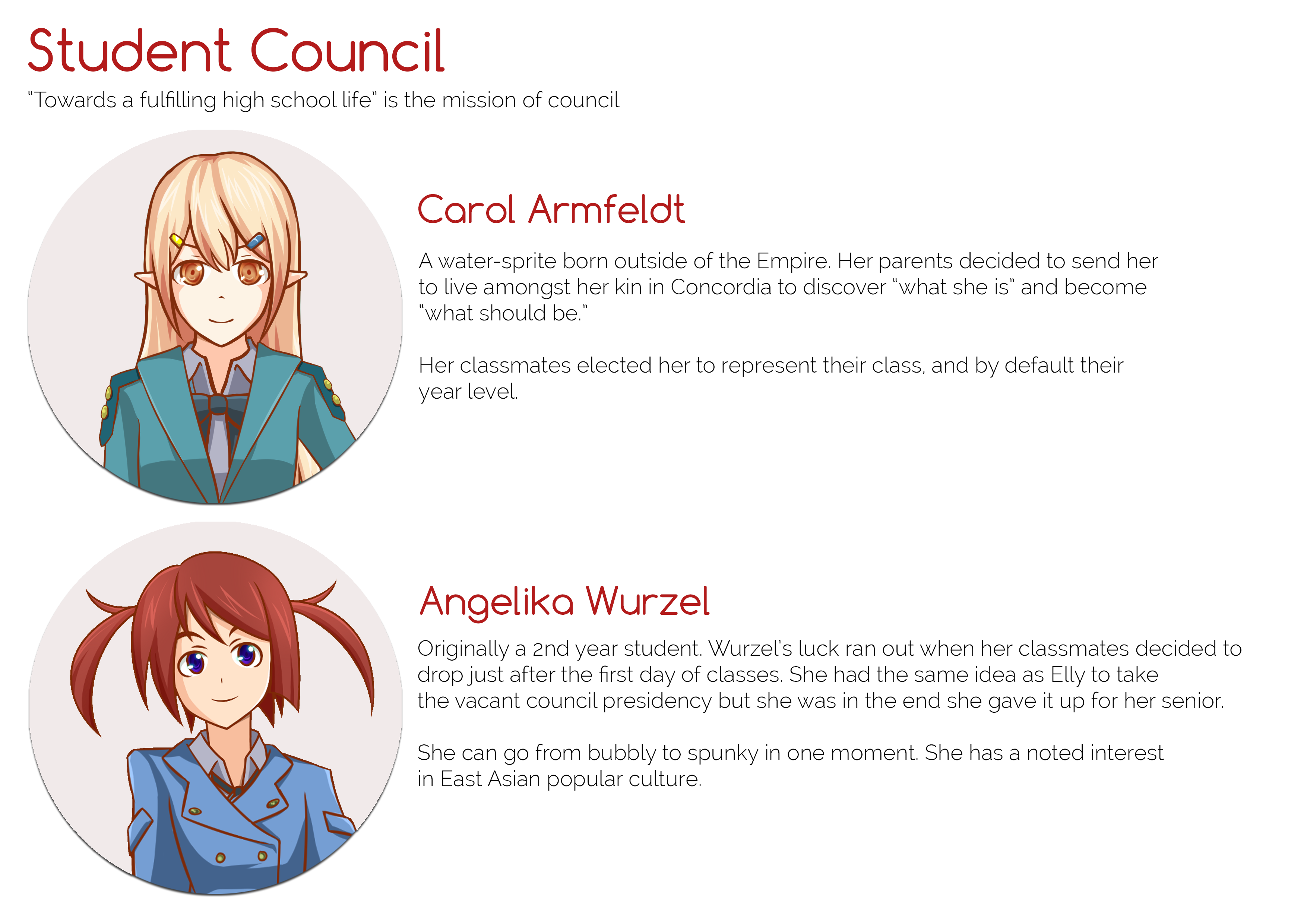 Carol Armfeldt is obviously named after Carl Gustav Armfeldt. But unlike the real life general, you won't have to retreat deep in the winter back to Sweden. Angelika Wurzel has gone through numerous name change. She originally carried her namesake's real name, down to the family name. Yes, we know Wurzel means root in German, but we did not intend for her to have that surname. It kind of stuck in the script though. So we are rather endeared to it.

The assets for the above characters were done by early 2017, though some of their outfits were done just recently courtesy of our good friend Mgx0. We'll probably ask him for more minor additions but anything like CGs for these characters, we'll probably commission Yokura back again.

Ren'Py LINT result at the time of this post:

This update supplements and/or deprecates some information on update 32.

Also known as: In Delinquency, Discipline, and Disorder. 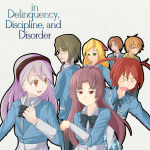 Tags
Embed Buttons
Link to in Delinquency, Discipline, and Disorder by selecting a button and using the embed code provided more...