Galactic Adventure Squad is an epic space shooter for mobile platforms. Using a unique, intuitive control scheme, the player takes command of Captain Porter and his intrepid crew as they snuff out the growing threat of the Fringe Republic. Command five distinct crew members and their abilities, including lasers, EMP bombs, hacking, shields, and the ability to repair your ship after taking damage. The game features cartoony visuals, charismatic voice acting (with over 350 lines of dialogue), Game Center support/achievements, and a high-score Free-Play mode. It was winner of the First Annual UCSC Sammy Awards for Best Overall Game.

Kiefer has the technical know-how that can only only come with decades of experience.

Given that he’s only twenty-one years old, that’s very impressive.

While the rest of the crew may occasionally disregard him because of his age, he’s still able to give valuable input.

In fact, when an issue arises, Kiefer’s usually the first one Captain Porter will consult.

Kiefer likes it when he does that.

Kiefer uses a lot of technical jargon and science terms, so it’s probably a good idea to take a break while he explains the status of the various intricacies of the ship’s functionality.

Please, ask him about the ship’s various intricacies, it will make him so happy. 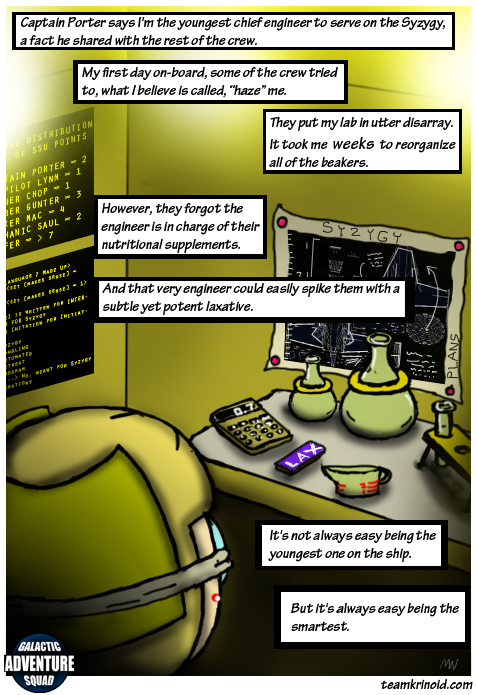 You can learn more about Kiefer, and the rest of the Galactic Adventure Squad, over at TeamKrinoid.com!

The second in a series of weekly web-comics about the characters of our upcoming game, Galactic Adventure Squad.

Since the characters are such an important part of our game, we've started releasing a series of web-comics about the crew of the Syzygy in Galactic Adventure...