Being two of the last survivors of the collapse of society, you and your friend must struggle to make ends meet while your remaining lifespan ticks away - and the only way to recover it is to scavenge life-giving mana from the pockets of vitality that haven't already been picked clean.

Warning: This write-up contains spoilers. It's advised that you don't read it until after you've completed the game.

Finding Eden was a fun experiment. Normally when I work on games for public release, they're huge multi-year productions which take a dozen teammates to put together. In this case, however, I had only one month and only one teammate.

The Contest
Before I start with this wrap-up, I'll describe the context in which it was made. RPG Revolution held a contest over the summer with the theme of "apocalypse." There was one month to make a game from start to finish with the following restrictions:
* Submitted games must have between 10 and 30 minutes of play-time.
* Up to 10 (ten) non-RTP Audio Resources (this includes any added audio, such as BGM and/or SFX).
* You may only use Scripts that are available on RRR.

On the day that the contest began, Hirei and I decided to enter. We came up with the concept, the gameplay, the plot, and the world map on the first night and immediately dove into work on it. 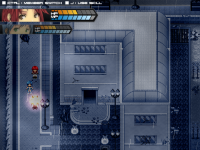 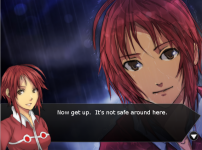 What Went Right
The big thing we did right was deciding upon everything immediately. We put together a simple, unified vision of what the game would be about. Since both of us knew exactly what we were doing, we were able to div e in independently and just start making the game without needing to consult the other. Not needing to stop and ask for a clarification or to work out what happens next in the plot meant that we could work at our leisure without wasting time making sure we were on the same page.

I can't imagine having attempted this by myself. Even putting aside Hirei's amazing art contributions, the benefits of having a partner to brainstorm with and toss ideas against are innumerable. Sometimes, I had an idea that made perfect sense to me, but when I pitched it to her, I found that I had trouble explaining it. If you can't explain your idea to someone else, then it's probably not a good idea. Not only that, but having someone available whom you can get feedback from instantly is extremely valuable, especially where gameplay is concerned.

As a game designer, it's very easy to assume that your players know everything you do. Every time I finished a new segment of the game, I sent it over to Hirei to play through and check. Sometimes, I was told "I'm not sure where to go from here" even though to me, it made perfect sense. You need a fresh eye to look at everything you make, because there will always be mistakes that you don't notice yourself.

On the topic of game design, the design process for Finding Eden was pretty weird, although it worked out fairly well (maybe it was a fluke). We had a story that we wanted to tell, but we had to be ever-conscious of the 30 minute deadline and we also didn't want to make it a linear trek from one plot point to the next.

We decided early on that we didn't want to make a game about stopping the apocalypse, since that seemed like the obvious approach that everyone would go for (although one of our early ideas was a game involving a time loop in which you try to find a way to avert the apocalypse, only to eventually find that it was impossible and that the story would instead be about accepting the end). Instead, we decided to make a story about life after the end and the strong bonds between fellow survivors of the end of the world, as well as how it affected people differently. 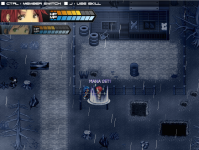 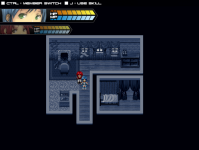 Because we wanted to illustrate the sense of isolation that an apocalypse survivor would feel, we decided to make the game based around exploration. We designed a variety of environments to showcase the sad state of the world, where the main characters would be the sole living things left. In order to break up the monotony of exploring desolate, lifeless environments, we decided to put in a few vivid environments where life was still barely clinging on. The hope was that these areas, which were filled with color, would be a pleasant surprise to discover. One of the joys of watching playtesters try out the game was examining their expressions as they found one of the oases.

We vaguely blocked out what the oases would be and placed them in the corners of the world map. Originally, we planned for a garden, a church, a lake, a cave, a battlefield, and a volcano. The idea was to put a plot event in each one to convey the story. As I started mapping the game out and implementing the first few scenes, I quickly noticed that we were planning for way too much. The opening and tutorial took an average of 5-10 minutes to complete, which was already occupying a substantial portion of our 30 minute allotment. We decided to cut out the volcano (it was hard) and to combine the lake and cave into one area.

In order to further drive home the point that these areas were "alive," I decided not to play music while exploring the majority of the game, with only the sound of rain as ambiance. When you enter an area, however, music begins to play, increasing in volume as you enter it. I designed the oasis areas to transition from monochrome to color by staggering the introduction of colored tiles, the increasing frequency of which was matched up with the fading in of the music's volume. Overall, I think the atmosphere turned out to be the strongest point of the game.

Anyways, this is turning out pretty long, so I'm going to cut off here and write the rest as a follow-up.

Next up - What went wrong!

Being two of the last survivors of the collapse of society, you and your friend must struggle to make ends meet while your remaining lifespan ticks away...

I already finished the game and it was short and sweet.It would be even sweeter if you recreated it and added all the stuff you had to cut and more.Anyways congrats,will be tracking.

Just finished playing. Very short, but incredibly well done. The ending really surprised me. The difficulty wasn't too high, but the combat was tricky sometimes, I guess it was meant to be that way. Loved the design and story, perhaps you could make a sequel, but don't feel like you have to just because some random fan says so. Just keep on doing with whatever it is you're doing right now.

Looks interesting. But i can't start the game. I always get a black screen and the game quits. Do i still need to download some kind of texture pack or are there incomapatibilities with win7? Sorry, it's been years since i played something made by the rpgmaker and that was still the good old rmk2. Quite nostalgic. Anyway, thanks in advance^^

That's very weird; I developed and tested the game on Windows 7. You shouldn't need to download anything extra. Does it give you an error message of any kind?

Damn time limit^^
Anyway, in case someone else got the same problem, i'll post the solution. Under win7, you might have to add the game.exe to the "data execution prevention". Weird, but works.

So, i tested a few things, searched the web, finally tried another game and got the same issue. Seems to be more of a general problem, but i couldn't find a solution. At least it's not a problem with your game.

That's really, really weird. I'm so sorry about this. I'll try to find a solution.

Yeah, it's weird. I don't get an error messag. The normal windows error message is disabled, but that wouldn't help anyway. The window shows up as it should and then quits.

Thanks for the kind words, everyone! I hope you all enjoy playing the game as much as we did making it.