The year is 2235. Hundreds of millions of people are living packed together in enormous
megacities. Being an ex-con, you're struggling with keeping or even finding a decent job.

But luckily there is now an exciting high risk, high pay alternative - illegal farming. Various plants, originally genetically modified to produce medicinal components, have escaped into the wild and some even mutated further thanks to the abundant radiation. Most are actually suitable for medicinal purposes right off the stalk, others can be refined using simple kitchen chemistry. This is a serious concern for the medical corporations who have spent decades and put billions of dollars into genetic research, in order to produce and keep these plants secret in the first place. They certainly can't have people being healthy for cheap.

In order to be a successful farmer you must defend your plantation by turning it into a fortress; building walls, sentries and traps around it. The intruders come in many forms. Mutated beasts,addicted to the plants wants to eat them and can smell them from afar. Other bandit farmers are out to steal your harvest and destroy your business. Worst of all are the corporations. Well funded and totally ruthless, they won't hesitate to send in huge robots to take down your whole establishment and most preferably you too in the process.

It's a hard world, but the potential profits can be enormous. Will you be able to defend and expand your own Farm Fortress?

Farm Fortress is a persistent tower defense/farming/action/multiplayer game where you plant exotic plants and defend these against hungry mutated monsters, corporate robots and other players. Plants grow regardless if you're playing or not. You can design your fortress with walls, sentries and traps and help defend it yourself. Buy new equipment, attack other players or gather allies to help defend your fortress.

The doghouse releases these dashing fellas who will hunt your enemies tirelessly. The only way to stop them from coming is to destroy their doghouse.

Attack Timer
Added attack timer which starts at 10 minutes for every attack made. For every life lost in the attack, the attack timer goes down by 45 seconds. Use that time wisely! 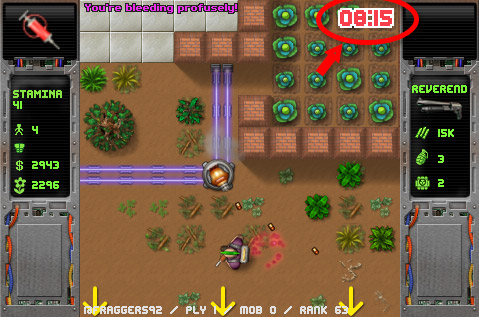 No Friendly Fire
Explosions and biowaste can no longer do friendly fire, i.e. missile sentries cannot damage themselves and bazooka/mine/grenade is not dangerous for fort owner.

Other fixes and tweaks

- plasma max hit damage increased from 85 to 100
- antimech nerfing, lowered max hit damage to 80 instead of 110
- reduced chance for freak-fully-grown-plant-bonus when returning after 6 hours
- homing missile sentry is more expensive and has no direct hit damage (was 5)
- fixed a missing cleanup of entity list that could result in odd (targeting)
- behavior biosludge sentry, emp sentry and homing sentry caused problems with pathfinding in other enemies.

This is the biggest update yet, containing several game play changing elements. Game World has also been reset.

This update consists mostly of bugfixes and tweaks.

Fun at the start but increasingly frustrating. When you log off for a brief period, you get attacked by many other people, lose all your sentries and die in the next monster wave.

The most expensive plant takes 6 hours to grow! Who would play for that long at one time? Given that plants only remain flowering for a short time before resetting, there's really no point even planting them; the chance of happening to log in when they are in bloom is very slim.

The aim needs to be refined so there is a greater variety of angles to shoot at - at the moment it feels very restrictive.

We're in the middle of balancing this right, we'll probably extend the no-attack time for a base that has been recently attacked. In the next update the turrets will be upgradable as well and other cool stuff will be added. This update will be released in a week or two.

Some plants are meant to take that long, they are also ripe for 30 minutes so you can get back in then and harvest. The point is to plan this right.

Thanks for the input!

Another important thing is that the game keeps running even when the player is offline, so those plants grow regardless if you play or not

Cliched setting with an unusual twist. The gameplay is pretty bizarre, I hope to try it sometime.

Pretty nice game!
PVP mode, that means,
each player has his own farm, right?

Yeah exactly, you can design and keep your own farm, and also attack other players farms or ally with them so you can help each other out. It's in alpha stage currently so lots of things will happen in the coming months. Free to play!

That sound's pretty awesome!
Tracking it :)