Dragons have taken over the Earth!

It's up to Sydney and Stanley to stop them.

EarthNight is an illustrated procedurally generated platformer that takes place in a dystopian future just after the dragon apocalypse. Humans have been exiled to space, forced to live in orbit above the planet. But Sydney and Stanley have had enough! They’ve decided to skydive back down to the planet, taking out as many dragons as they can along the way.

Each run begins in space. You must traverse five layers of the atmosphere on the perilous journey down to Earth alternating between skydiving and running on the backs of dragons. Your path to EarthNight will always be different and riddled with danger.

• Jump and dash your way across the backs of dragons on your way down to Earth in classic 2D side-scrolling action.

• Unlock more than 25 gameplay-altering powerups that will aid you on your journey as you slay dragons and discover secrets.

• Experience a unique run no matter how many times you play thanks to near-infinite variations of hand designed, procedurally generated levels.

• Explore five layers of the atmosphere with more than 40 enemies, more than 15 unique dragons and hundreds of scraps and items, all brought to life by artist Mattahan, who meticulously painted each of EarthNight’s 10,000+ frames of art and animation.

• Enjoy an original, exciting soundtrack intertwined into gameplay, including more than 20 songs written and performed by chiptune musician Chipocrite.

To promote EarthNight and grow its popularity (top games), use the embed code provided on your homepage, blog, forums and elsewhere you desire. Or try our widget.

Path to the Sky

Path to the Sky is a roguelike platformer that gets harder as you climb up.

In The Free Ones, try to escape the island that holds you prisoner and unravel its mysteries along your journey.

Enter Bahlam, a sunken city of the Old Gods, located deep in the South Atlantic Ocean. Maritime archaeologist and adventurer Nikolay Bernstein and his...

Prince of Persia: The Forgotten Sands

Visiting his brother's kingdom following his adventure in Azad, the Prince finds the royal palace under siege from a mighty army bent on its destruction... 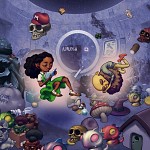