When a deep space exploration sleeper ship goes silent hundreds of lightyears into its mission, controllers on Earth awaken a group of maintenance droids onboard in order to investigate what went wrong.

Droidnaught is a first-person, procedurally generated sci-fi dungeon crawler inspired by classics of the genre such as Captive, Hired Guns and Dungeon Master, combined with modern survival horror themes and roguelike elements. 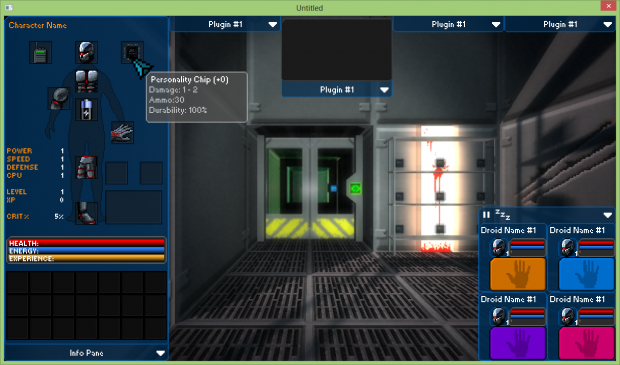 Developed as a solo project, it will eventually be built for Windows and Linux, with MacOS and iOS/Android as a further milestone if there is enough interest.

As an additional milestone I would also like to make the game entirely re-skinnable/re-purposeable with only light scripting. For the purposes of making any kind of first person dungeon crawler/3d roguelike.

Just a quick update on this week's progress:

Character creation
At the start of the game, you will connect to the droids as they awaken in a closed storage room. On the shelf will be a selection of blank, and randomly pre-generated personality chips. Plugging one into a droid will either prompt you to fill in a name, and assign skill points, or, if using a pre-grenerated chip, will assign the randomly rolled character traits to that droid.

Shops
I'm hoping to add rather "roguelike" shops to the game, where shops occupy a special room and have a shopkeeper who keeps track of what you're picking up - you can either honestly pay for these items, or attempt to steal/kill the shopkeeper for them.

Enemy design
I've started putting some thought into new enemies that you might encounter. Some examples are "pit monster"-type creatures that have multiple tentacles that reach out of a hole and roam the corridors - forcing you to fight/sever them, and a "Boomer" type creature that explodes with corrosive gas on death.

Plugins
Droids will be able to install plugins that will run a variety of UI programs in the top bar, such as maps, damage meters, pathing, hacking, etc. You will be able to turn these on and off as the need arises, but all plugins consume energy while they are running.

Skill assignment
Skill points will probably be assigned to a variety of "perks" that are all available at any given time, rather than being a tree.

A look at a small, randomly generated dungeon with some basic enemies, combat and UI Features

First thing I thought of was System Shock. Well why not, that game was no doubt a first person dungeon rpg. :P This game looks great, so much going on. :D

Thanks! Hopefully not TOO much going on ;)

Looks nice! especially the new depth of field. Will there be like lazer blasters or guns that you can pick up?

Yes - guns are already in the game (although very basic, they shoot bullets and bullets damage enemies). Guns currently have infinity ammo, but this will change soon, requiring you to reload. The new UI changes allow for guns to equip different kinds of ammo, along with Weapon Mods (like a damage modifier or something that makes your bullets bounce). I also plan for things like Laser blasters, cannons, flamethrowers, etc. The engine currently (kinda) supports laser beams, but it's not ready to be attached to a weapon yet - it's currently only used for Work-In-Progress laser doors ;)

This is so awesome it hurts. Absolutely love roguelikes (or should I say, roguelike-inspired games like ToME!). Can't wait to play this in Linux as well, really glad you are supporting it. :)

Thanks for the encouraging comments!

Linux support should be coming after the first playable demo on windows. Basically as soon as I can stop working on gameplay for a bit.

Thanks! Will be getting more sci-fi/story elements soon!