Diplomata requires both strategy and social skills, and allows you to team up with, and compete against hundreds of other players from around the world.

Diplomata is a turn-based game. Every 10 minutes you get 3 turns, and you can have 300 maximum. You make turns to develop your state (building objects, improving agriculture and industry) or for interaction with other players (attacks, secret service actions, sending help to allies).
This kind of approach leaves player with enough time to think and plan before making a turn. Additionally, turns enable equal game no matter if you make turns as soon as you get them or just once during a day!
Each round of the game lasts one month, and each first in the month all players start from zero – equally. This gives you opportunity to plan new round from the beginning as well as to take revenge on enemies! 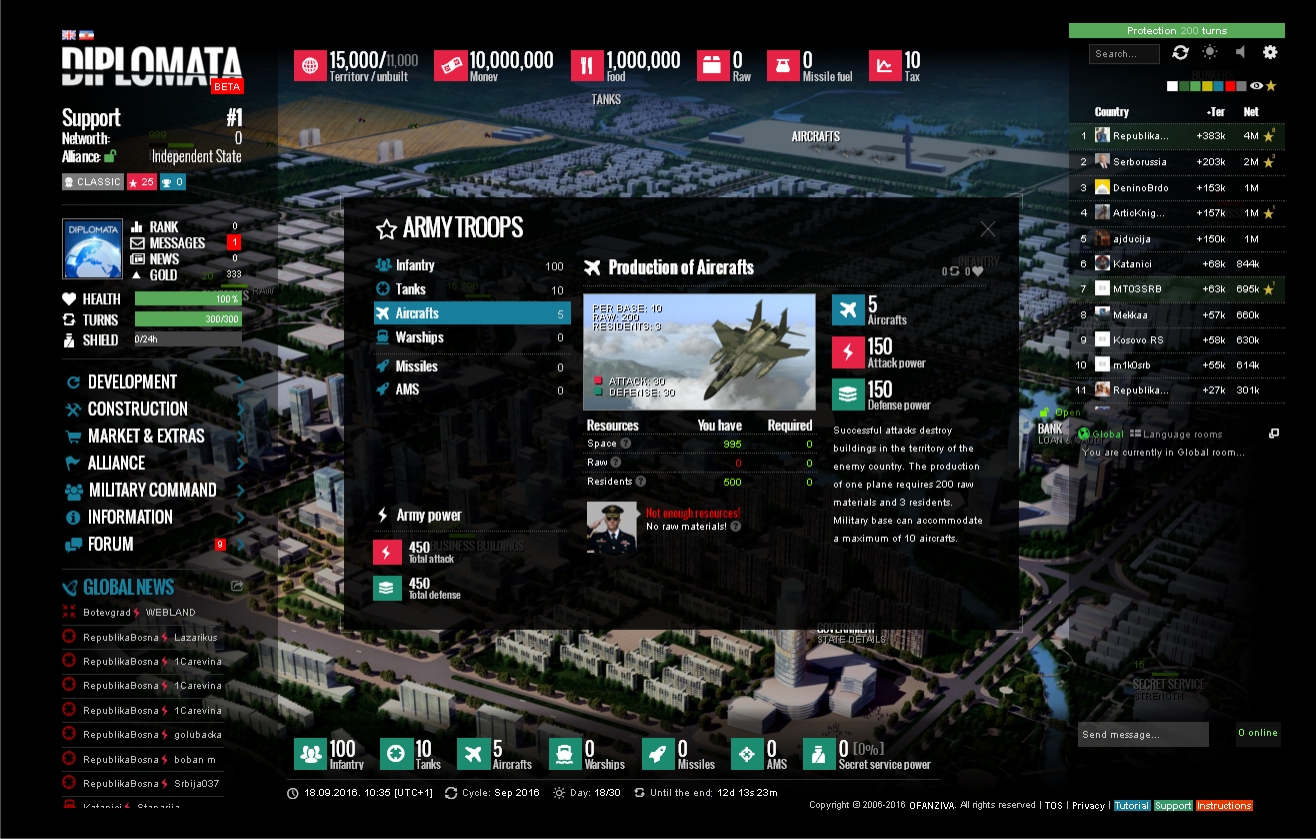 Human civilization reached culmination in the end of 21st century. After fast development in electronic era, whole world ended in collapse After the collapse of human civilization, states known at that time ceased to exist. Several decades after the total collapse, Security Council of the United Nations, or what was left of it, tried to preserve what can be preserved. It was agreed that the old boundaries of the state must be the basis for the foundries of a new world order to avoid chaos. However, some of the new born states claim they deserve more power than others, demanding for redefinition of frontiers. Using everything from diplomacy to war, you must strive to build an country wealthier than all others. Through this all, you will compete against anywhere from hundreds to thousands of other players, all aiming to achieve the same goals.

Chaos could not be avoided ... The battle for power has started ...

The game is fully browser based so you won't need to download or install anything!

To promote Diplomata The Game and grow its popularity (top games), use the embed code provided on your homepage, blog, forums and elsewhere you desire. Or try our widget.

This game unfortunately appears to be dead, the main link to the game no longer works.
I've searched for a good 20 minutes trying to figure out if it's alive or not, but I can't find any information on it, even the Facebook page for the game has been dead for a good 4 years now.
Shame, I never even got to play it because of the broken google maps registration requirement.

Panzer Corps 2 is the ultimate Second World War strategy game! Enjoy the time-proven gameplay formula which has been appreciated by millions of players...

Continuation of the game development "Tanks of Freedom". Changes have been made to the mechanics and the tiles of the world have been changed to black...

Wizard101 is a free-to-play MMORPG. Players create wizard characters that attend a school to learn magic. As the students learn magical spells, they also...

Gary Grigsby's War in the East

Welcome to March of War, the online turn-based strategy game. Your actions will shape the world! Be one of the first players to participate in a whole...