This week, we got a chance to talk to Zack from Mega Cat Studios to talk about developing retro games for new consoles, marketing physical games in the digital age, and how they’ve built their die-hard community of retro fans.

I’m Zack and I’m a creative director with Mega Cat Studios. I do a lot of world design, narrative, character design and a little bit of game designers.

My background is actually in writing, and I was working as a freelance writer, doing a variety of different jobs when I found a posting for writing a game manual.

It was local, so I had the opportunity to go down and meet the company in person, that’s where I met the other Mega Cats.

I was actually writing the text for an NES manual, for a retro NES game, which I thought was crazy because the NES was already 30 years past its prime.

I was fortunate to get in with the company as they were starting to take off.

From there, my responsibilities grew as they took on more work and I took on more of a role in the company, and here we are today.

What are we working on now?

We just released Fork Parker’s Crunch Out on SNES.

We’re also working on Bite the Bullet, a run-and-gun game for PC and Sega Genesis. It’s a run-gun-and-eat game where eating is the central mechanic: you have to eat enemies to power all your abilities, refill your health, and to transform into a more powerful form.

GIF of Bite the Bullet gameplay

Our next retro project is a game for the Sega Genesis called Lethal Wedding, where you play as a bride-to-be and her future mother-in-law, and the day before the wedding and the groom is kidnapped. 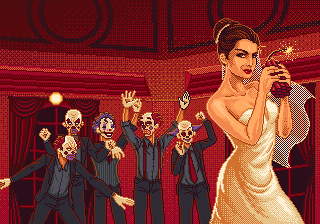 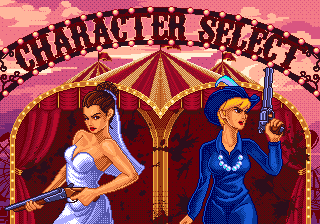 How did we start making new games for retro consoles?

The founding members of the team had an appreciation and love for these retro platforms.

We decided to do a sort of like a hobbyist project instead of doing client work.

We thought, “why not make a new retro game?” and we did, and we loved it so much that we decided to make it part of what we do full time.

That really helped kind of establish our identity a little bit as far as the ethos we’re trying to capture with our games.

Every everyone’s background was in different areas, and that’s I think the thing that really brought us together was our love and appreciation for those type of games.

It’s definitely a labor of love.

The play testing is rigorous, to say the least, because once it’s out there, there’s no way we can do a bug fix or a patch.

Once it’s out, it’s out, so we make sure that everything is perfect before we release it.

There’s so many restrictions and limitations these old consoles that you don’t encounter and modern game to have.

For example, you can only display so many colors on a screen at a time for sprites and backgrounds. There’s also only so much space in the cartridge.

When you’re when you’re planning in designing a game, you really have to consider all these things, and at first it feels very restricting.

It feels like you have to do things very basic, but after you spend time with these systems and the art styles, you can really put a lot of great stuff out there.

You learn to work with limitations and use them to your advantage.

For an NES game, everything has to reinforce the same core concept you know. The core mechanic has to be fun, and everything kind of has to be aligned with that.

There’s no room for modern features like dynamic beard growth and other kind of bells and whistles that look good on the back of the box or on a features list, but don’t feel that great when they’re implemented.

There is an added cost doing physical goods today’s day and age when everything is digital.

It’s something we actually lead into with retro projects, that only makes up a portion of our identity. We also do digital games, modern games, everything from modern consoles to PC.

With the retro projects, we don’t want to just have a typical cartridge. We want to have the best materials for the box, the nicest manuals, and everything has to be nice because we want to recreate that feeling of being young, going to the store to buy a game, reading the manual in the back of the car on the ride home, and holding it in your hands.

It’s definitely a feeling. It’s kind of a lost when you download it.

There’s something to be said for having a controller in your hand, sitting next to someone, and playing the same game on the couch with them. It’s just a different experience, playing in the same room with somebody.

There’s a physicality that’s lost when it’s all online.

How do you market your games?

We come up with marketing strategies on a project to project basis.

For one of the tiers we had a limited edition of log jammers, and it came with this cartridge that was hand carved wooden cartridge and fully functional. It was around $150 and it was definitely our most popular tier.

For our marketing, it was definitely a brute force approach.

We were posting about it on social media. We also sent a lot of messages to press.

I think the thing that got us a lot of coverage was the physical NES wooden cartridge. We essentially used that as a headline.

For Coffee Crisis, it was our first major PC release, and we also have the Sega Genesis version.

The focus is on metal and coffee, it’s all about aliens coming to take our most prized possessions, which are WiFi, heavy metal, and coffee. We decided to make some alien-themed coffee to go along with it.

So, we had the coffee, but we also contacted in a number of metal bands and we put them in the game. We also have metal themed streamers and YouTubers in the game: AlphaOmegaSin and MetalJesusRocks are mini-bosses in the game.

It comes back to how to get visibility. How do you do something that’s unique and interesting and kind of press worthy with every project? It’s a new challenge, but it’s also a new opportunity to get creative.

When it comes to marketing and community development, we’re constantly improving, constantly learning, and constantly refining.

When we when we design games, whether it’s retro or modern, we always try to bring the best of both worlds and marry them together: a fusion of old new.

For example, you know good things about retro games: accessible controls, fun for fun’s sake, core mechanics that people can understand, and the couch co-op angle.

Good things about new games would be achievements, replay ability, tons of content, and things like that.

When people approach our retro games, sometimes it blows their minds that we still do this. The flip side of it is, when a retro enthusiast plays virtual games, I think they can appreciate how hard it was to do certain features, which is really cool.

We go to conventions, I think a big way for us to interact with the guests is the retro angle, and showing people new retro games. It’s a big draw for a lot of people.

For those grew up with them, it strikes a chord. It’s kind of surreal experience for some people to see a new retro game.

Modern gamers might see it and recognize it. They might be aware of the golden era of gaming from the 80s and 90s nineties with the Sega Genesis or the NES, and although they’ve never played it, they might think “Oh, my uncle had one of those,” or “I think my mom has one of those up in the attic.”

For a lot of them, it’s their first time playing with these retro systems, so I think there’s a certain purity there about a new retro game. It strikes a cord of nostalgia and really resonates with a lot of people.

We try to recreate the feeling of playing in your mom’s basement with your buddies, sitting in the living room couch co-op style.

It’s definitely something that’s lost of it with modern games, you know, playing online only. That physical closeness, it breeds this socialness.

It’s the same feeling there: it’s the feeling of being next to someone and of sharing the experience. Even if you’re not playing yourself, watching someone play in real life is a different feeling than watching a game online.

Verified content creators and press can request keys for Coffee Crisis or interviews with Mega Cat Studios through their game page. 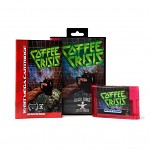