More information and pictures regarding our attendance at PAX East this year.

Posted by AgeofChivalry on Apr 3rd, 2011

This is a followup post about our attendance this year at PAX East in Boston. You can find Part 1 here: Chivalrythegame.com

After spending the past two days getting to know each other, and preparing our booth it was finally show time. The morning of the first day we seriously underestimated how much time it would take to get everyone ready and down to the convention center, as a result we ended up speed walking 20 minutes in the rain, carrying our breakfast. No harm done though as a quick flash of our exhibitor badges to security got us in the show doors with 5 minutes to spare before the public was let in.

We hastily crammed the last of our breakfast into our faces and did final setup on the booth. At 10:00 right on, the announcement rang out that the show was now open and people poured into the exhibit hall, all rushing for the big name games to beat the line-ups. In indie alley, things were quiet for the first half an hour, the crowd could only be heard as a distant buzz while our team sat idly all sporting their new Chivalry T-shirts ready to field questions from the visitors. 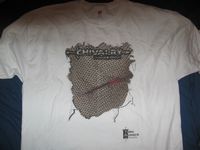 And then they came, slowly at first, trickling in from the main areas. But sure enough the numbers grew and the trailer and booth attracted interest and soon we were all hands on deck, each member of the team talking with the fans about the game. This was an incredible experience, talking with people about the game and project you are so passionate about and seeing them get excited as you describe the intricate details of features such as lopping your opponents head off and smothering him in boiling oil as he tries to knock down your castle gates. 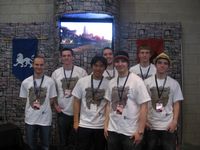 Can you spot the Snorer?
Perhaps the biggest surprise for us while at the show was realizing just how many of you have in-fact played the mod, Age of Chivalry. It was every third person, every other person, or sometimes strings of people in a row who would come to us with fond memories of playing the mod and express their interest in the coming “sequel”. This was by far the most rewarding part of the trip as interacting with a person who is so engaged with your previous and current work was absolutely invigorating, the team is still feeling the momentum rush from this experience and we encourage you all to come to our forums and be a part of the ongoing interaction with us.

That’s not to say the show went without a hitch though, for instance after the first day we had a lot of feedback on people wishing we had something to hand out to them and in retrospect this was a silly mistake. But what was most interesting to me was to see how our team handled these situations, every day, sometimes many times a day we sought to iterate our booth, to improve it each and every day and I feel like this perspective and attitude allowed us to learn so much more from this experience. It also lead to us heading to kinko’s at 3am that night to get some pamphlets made up that we’d thrown together that night.

The whole weekend was a blur and we had a ton of fun discussing with everyone the game’s features and meeting the wide variety of people that the game appeals to. We also had the opportunity to meet with Ashton and the guys from Primal Carnage and checkout their booth where they were showing dinosaurs eating people in 3D! We exchanged t-shirts and spoke for a while about being indie developers and how the show was going. It was great to interact with another indie team pursuing the same dream that we are. 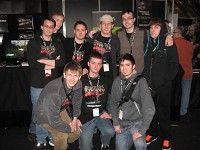 All in all the show was a great experience, we managed to come in way under budget and the biggest drama moment we experienced was over who ended up with the last Duke Nukem bottle opener. We loved our first exhibition and are pleased with how well the recent media release has been received by the fans considering it is just the tip of the iceberg in terms of our future plans. We hope you will continue to follow along with our project and thanks for listening to our experience at PAX East!

Want to discuss our PAX experience with us further or learn more about the game? Our development team is super active on our forums so please come by and let us know what you think: ChivalrytheGame.com .

Congrats! Glad to see you guys are doing well!

that is perhaps the ugliest shirt in ages :)

wow :O
moving up in the world, huh :D

awesome an... wait a minute, did i hear "dumping boiling oil on opponents"? i did! i did here that! omg that IS EPIC :D

Particularly awesome to me because I'm always learning about so much horrible stuff happening in the world every time I look at the news, so it's nice to be reminded that humanity is also still creating cool stuff like this. :) Congrats, and rock on guys.

Oh, and because I've recently discovered the webcomic/black hole of free time/religion that is MS Paint Adventures, here's this:

TBS: Pose as a team. The world is real.

so its not on the source engine now?

Yeah, Chivalry: Medieval Warfare is going to be on the Unreal Development Kit engine.