Relive the days when dinosaurs roamed the earth and rocks settled disputes between neighbours!
Caveman Craig 2 is a unique strategy/management game featuring Craig, a tribal leader. It's your goal to lead Craig as he builds his clan in an attempt to rule over the four tribes of “Boggdrop”. Set in a prehistoric world, you decide the fate of man as you hunt, gather and prepare your way to victory. Teach your three types of cavemen new skills and watch as they contribute to the survival of your people. Gather your brave warriors to fend off a dino-frenzy, or use special skills to outsmart the rival tribes. It's your call in this humorous caveman classic!

On the 20th of April, 2008, we released Caveman Craig on YoYo Games as an entry into their "ancient civilisations" game design competition. This week marks the 5th anniversary since the original release, and we want to celebrate with a few exciting announcements!

Get from Desura (PC)

The special edition of Caveman Craig 1 is now FREE to download from cavemancraig.com.

We will be releasing the FREE "Battle at DuDu Forest" DLC for Caveman Craig 2 on the 12th of May, 2013, for all existing and new purchasers of Caveman Craig 2. The DLC is a brand new conquest level set in a dense and lively forest, featuring. 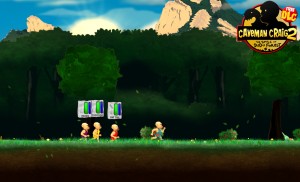 And finally.. a ‘behind the scenes’ pack for the die hard fans!

Looking back on the past 5 years, it's been interesting to see how our ideas have developed. So we put together a bunch of old concept art, sketches, videos, and even documents with notes on the development of Caveman Craig 2 (and some for Caveman Craig 1!), free for you to explore.

Direct download link for the "Behind the Scenes" pack is here.

Caveman Craig 2 is 50% off from Desura and CavemanCraig.com until the end of 2012, or the end of the world - whichever comes first.

We need your HALP!

Caveman Craig 2 has been submitted to Steam Greenlight and we need YOUR help to get it released on the mother of all distribution platforms! With enough...

Our new and free DLC, "The Battle at Dudu Forest", is coming soon! The DLC will feature a whole new level set in Dudu Forest, with a new dinosaur, new...

Another patch for Caveman Craig 2 is now out, including a number of bug and crash fixes.

A playable demo of Caveman Craig 2, featuring the tutorial and first conquest level!

There's another bug when playing the last Conquest map: sometimes, my avatar disappears during big battles, he dies, then he's invisible or missing.

Side question: about the Caveman Craig Classic I've got from your web site, when I try it on full screen, it shows the game in a little square situated on the top left screen. Is there a way fix to this by any chance?

What version of Windows are you running? Windows 8 might be playing up with the older version of Caveman Craig as we built the game for preWindows 7.

The last conquest map is a bit buggy like that. Will keep it in mind. thanks!

And yes, by restarting the last level, I confirm that I was able to finish this wonderful game :)

Side question: will the Caveman Craig 2 DLC be released someday?

I've got a Fatal Error when loading the second Conquest mission's saved game.

Symptoms: the game loads, I can throw stones, but it's impossible to move. A few seconds later, I get this ingame message about the fatal error, which asks me to restart the game, which doesn't fix the problem.

Otherwise, the game is pretty much awesome, and very addictive :)

Hi mate. Sounds like a corrupt save :( It happens on the odd occasion. If you start the level fresh, then re-save.

Tried the demo, it was fairly entertaining. Curious before I buy though: Are any changes coming to throwing rocks? W then Space over and over and over to take down a statue is actually putting me off. Wouldn't be so bad if my selected hunters actually helped. They tend to stand around and do nothing unless you hit a dinosaur or enemy tribe.

Hi mate,
There are a number of rewards you can use to help take down checkpoints. Try meteor strikes or flaming rocks.

In the upcoming free DLC (ugh, it's taken so long..) you can press W twice to throw rocks instead of having to get the timing right between W and Spacebar, so that's a lot less annoying.

Indeed only the most exalted of cavemen, e.g Craig, can brush the holy statues with rocks.. or something. :) But there are definitely ways to crush through them with ease with a bit of reward trickery.

Hey Rhys, if i was to buy this on desura would i get a steam key aswell? or not?

If Caveman Craig 2 were released on Steam, and we have the power to hand out keys, then absolutely.

Hey, Thanks for the reply. I enjoyed the first one so much so I just went ahead and bought it. If you can't hand out steam keys *when* its put on steam ill probably just buy it again. Keep up the fabulous work!

A surprisingly deep game with an excellent soundtrack. I'm glad I tried the demo.

My only complaints would be the rather modest resolution it's locked at and the 'hammering the spacebar' to fight or shake off tiny dinos feature. I haven't pressed buttons so hard and fast since the Track & Field arcade game back in the 80s. I didn't like it then, either!