AudioBrush brings a ground-breaking new way to game on your iOS device with your own music. Choose a track from your music library and starting gaming against the world to gain new high scores, unlock achievements and get some great rewards! AudioBrush analyses your music in extreme detail to give you a great experience every time you game with one of your tracks. ◆ Game with your own tracks straight from your music library ◆ Compete against both your friends and the entire world! ◆ Unlock Achievements ◆ Get those high star ratings! ◆ Get great rewards for how well you do! ◆ Enter Tournaments to win prizes ◆ Completely FREE TO PLAY!

It's been a big, long and taxing project but it's finally paid off as AudioBrush is finally released upon all the iOS devices this world beholds. 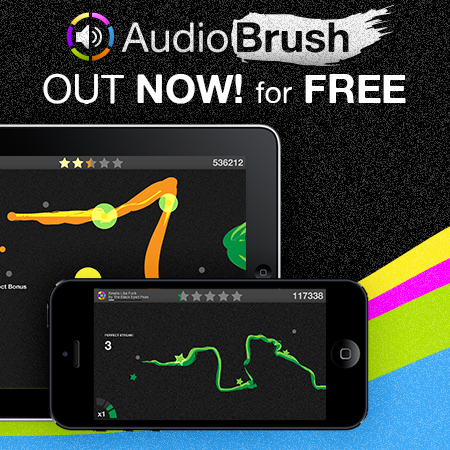 Whilst AudioBrush lets you choose your own tracks to play, tournament mode allows anyone regardless of whether they own said tracks to play against the world. The launch of AudioBrush sees the likes of metal band Brutai and Electro House artist Jon Baz.

AudioBrush has just entered the Apple approval process as will be on a iOS device near you soon! Check out the new launch trailer for the latest.

After 3 months of development AudioBrush fires up a Kickstarter Project in preparation for launch later this year and continued development.

Yup you heard, AudioBrush is now available on the Android platform. Players on this platform will experience the exact same game as iOS users.

The dark side of AudioBrush is begins to light up with the event of a new member!

The brush is too big in my iPod