Armored Brigade is a commercial, real-time tactical wargame, focusing on realism and playability. The game has drawn inspiration from classics such as Steel Panthers, Close Combat and the Combat Mission series of video games.

It is my pleasure the announce the arrival of the Armored Brigade, a real time tactics wargame set in the late Cold War period and developed by Juha Kellokoski and company. The Armored Brigade, as a tactical wargame strives to faithfully recreate the environment and the equipment used during that period, with special attention put to the diversity of nationalities present and the customizable nature of making gameplay scenarios. The main focus is realism and replayability.

Armored Brigade takes the best out of classics of real time tactics wargames such as the Close Combat Steel Panthers series. From a top-down perspective, the player controls his units as his struggles against the opposing forces in this bleak world of Cold War going hot. The maps themselves are faithfully reproduced terrains of Germany and other countries of Europe taken from satellites photos as well as other sources. For example, the infamous Fulda Gap sector is realistically presented in the Armored Brigade.

The the game features Armed Forces of several nations. Including such countries as Finland, West Germany, UK, USA, USSR and East Germany. Both the land as well as the air components of the respective Armed Forces are featured in the video game. Fire Support mechanic is provided, with both off-map and in-map artillery units being present. Furthermore, several types of munitions are available, including the infamous DPICM (Dual-Purpose Improved Conventional Munition) and smoke shells. It is possible to lay down minefields via artillery strikes. Players can call in air support, not only ground attack airplanes and helicopters but also initiate air-to-air engagement situations. In defence scenario operations; field fortifications such as foxholes and bunkers can be constructed, but these can be breached using special assault engineering equipment.

The custom engine of the game features dynamic time of day and variable visibility, wind and ground conditions that actually affect the ability of the ground and air units to operate and engage each other. In night conditions, visibility can be improved through some advanced units possessing night vision equipment or by illumination flares drop requests. The game also features all four seasons, with matching changes to the terrain and units. Thus, for example in Winter the various tanks utilize a fitting camouflage variant and infantry are more prone to fatigue while moving through difficult terrain.

In addition, Armored Brigade has modelled in unit morale, individual level of experience of each unit plus fatigue effects and command delay. Devices such as the radios having a noticeable impact on the overall fluidity of giving and following orders of the present combat units.

Armored Brigade is scheduled to be released on the 15th of November!

Wow, I remember I played the hell out of this a couple of years ago.

Nice to see the development still going and strong. 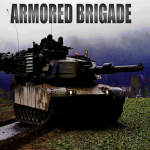