Valley 2 has officially launched, and is now available on Steam and GamersGate. Check out the new trailer!


A Valley Without Wind 2 has officially hit 1.0, and is now available for PC/Mac on Steam and GamersGate at 25% off for the first week.

Valley 2 combines an old school platform adventure with a robust turn-based strategy portion. Though the game is a sequel to our 2012 release A Valley Without Wind, it's more of a spiritual successor. We took everything that we learned while making the first game (plus many new ideas) and focused it all into a new, tightened experience -- giving the graphics an update to boot.

For a variety of reasons, we've also chosen to give Valley 2 to all those who purchased the first game for free, and those purchasing Valley 2 will also get a copy of the original. The titles are, and will remain, bundled together on Steam and elsewhere.

The official Valley 2 launch trailer, featuring the game's standout track "Stand and Fight" by composer Pablo Vega, is out now as well. For more info and discussion on the A Valley Without Wind 2, we encourage new players and other interested parties to stop by the game's bustling forums. 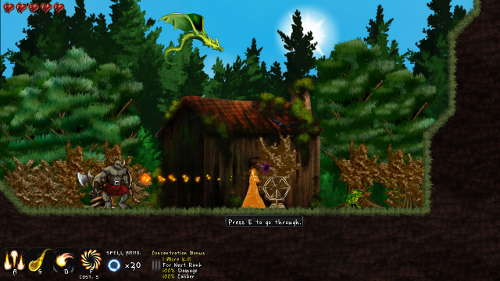 About Valley 2A modern take on the 16-bit era, A Valley Without Wind 2 blends a variety of mechanics across multiple genres, seamlessly bringing together the best qualities of old-school platform-shooters and turn-based strategy games. You choose how and where to explore via the world map, how to upgrade your character via mage classes, feats, and perks that you unlock, and how to battle the forces of evil every step of the way.

Your character is a mage who has infiltrated the inner circle of the evil Demonaica, and you now share the power of immortality that he uses to terrorize the land. Using this power against him, it's time to lead an uprising and ultimately bring him and his henchmen back to mortality so that they can be dispatched.

Gameplay alternates between two modes that complement each other: brief, tightly-designed platforming segments where your character customization and equipment can be tuned to meet the tactical needs of the current stage; and quick strategic turns on the world map where you order your troops to fight, scavenge, build, recruit, farm, and use special powers. Demonaica and his armies pursue your forces directly on the world map, while his five henchmen have been sent to recapture you in the platforming segments.Your immortality came at great personal cost, but it makes you the one last hope of saving the world from darkness. 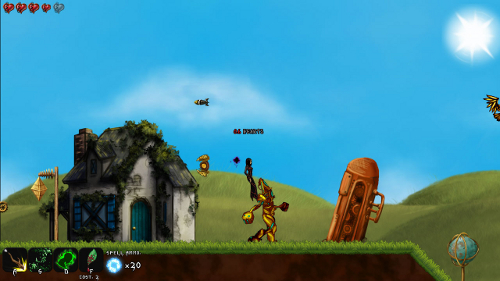 Key Features:Platforming and Turn-Based Strategy Coupled Together:
Flip back and forth between your own adventure, and the progress of the resistance you're in charge of. Freely adjust difficulty levels for both to tailor the experience to your own personal playstyle. Both sides of the game can be quite easy or incredibly hard.

More Tactile Combat:
The physics of movement and attacks have been completely redone from the first title, with more traditional gamepad and keyboard support. Spells have mass and can block each other, leading to many interesting tactical situations in the platforming segments.

Focused Gameplay Arc:
Unlike the endless sandbox-style first game, this complete re-imagining has a distinct beginning, middle, and end.

Procedurally Generated Worlds:
Each world is a unique challenge, leading to excellent replay value once you do beat the game!

Co-Op Multiplayer:
Bring along as many friends as you like on your journey, depending on your connection speed. 2-8 players recommended on most Internet connections; many more on LAN.

Extra Challenges For Expert Players:
String together flawless kills to earn "concentration" and become even stronger. Beat the game on harder difficulties to earn rare achievements.

Get The Original Game For Free!
The original game was unique and experimental, and it comes included absolutely free when you buy the sequel. 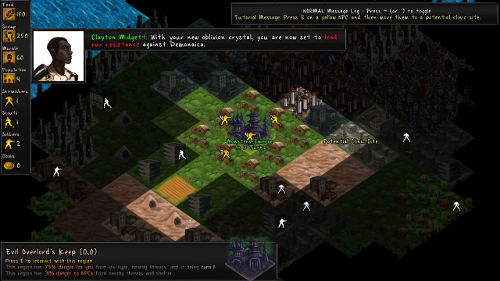 About Arcen Games
Arcen Games entered the PC indie scene in 2009 with their cult classic AI War: Fleet Command, which was named the 40th best-reviewed PC game of the year by MetaCritic. Their second year was a busy one, seeing the release of The Zenith Remnant, the first full expansion for AI War; Tidalis, an innovative block-based puzzle with casual appeal and hardcore depth; and Children of Neinzul, a micro-expansion for AI War with all profits benefiting the Child's Play charity, of which Arcen is a platinum sponsor.

AI War's third and largest expansion Light of the Spire marked Arcen's first release of 2011, with the rest of the company's focus being devoted to their most massive project yet: A Valley Without Wind, which released in 2012. The end of 2012 has been another busy time for the team, with AI War's fourth expansion Ancient Shadows launching, A Valley Without Wind 2 reaching beta, and their recently announced top-down survival game Shattered Haven scheduled for release in the coming months.

Originally a one-man shop, Arcen Games has grown to have half a dozen part-time or fulltime contributors to its various titles. For all the latest news, media coverage, and some of our other musings, follow us on our developer and individual game pages on Reddit, Google+, Facebook, and Twitter; as well as Arcen lead Chris Park's Games By Design blog.

you dont have wind, cause you build dune windtrap formed houses

I enjoyed Valley 1, and really love where Valley 2 is going! I cannont recommend this enough! I love the visuals - while I enjoyed Valley 1's look, Valley 2 has put a lot of polish on it without losing the great retro 16 bit era vibe it had going on! The music is fantastic in these games too - anyone who grew up on a C64 will love the awesome theme song!