Today we want to introduce you to one of the things we’re looking most forward to as part of the rework – PvP (player vs player) battles! This rework is a perfect time for us to add to the game something that has not been done to an extent we wanted to – a bigger feel of competitiveness and strategy, as well as making the core of WarZone less repetitive and more exciting.

Today we want to introduce you to one of the things we’re looking most forward to as part of the rework – PvP (player vs player) battles!
This rework is a perfect time for us to add to the game something that has not been done to an extent we wanted to – a bigger feel of competitiveness and strategy, as well as making the core of War Zone less repetitive and more exciting.

We have been looking at tons of options to achieve that and have after careful consideration narrowed it down to something we feel will integrate extremely well into the core experience.
War Zone is a dangerous and competitive place – not only do you fight to proceed through battles and increase your power, now every 10th battle will also be a test of your strength and how well you fair against other players. 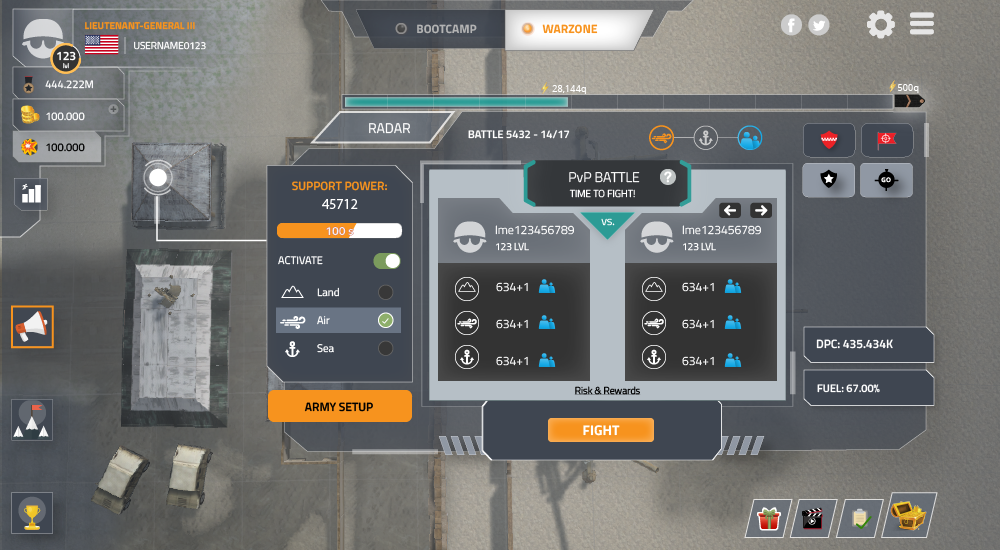 In PvP battles you will get a chance to fight with one of several opponents, who will be similar to you in strength – who you choose to fight is up to you as you might have strengths over someone. To aid you in your choice basic information about the strength of the opponent will be shown. Who do you have more chances to beat? Detailed explanation of how battles are calculated will be available in-game, but in short:

– Your support units will become your fighting force
– Your Level, and various upgrades will be a part of battle calculations

Once you’ve made your choice a battle terrain will be chosen randomly – Land, Air or Water will become battles where that type of your support units will fight spectacular battles. Are you more proficient in Land, Air or Water battles? OR will you try to aim for a more balanced army? How you build up your upgrades throughout the game will determine how strong you will be against certain type of enemies. Will most players be focused on Land, Air or Water battles? The best thing is – we don’t know! How players build up their armies will be something that will vary over the course of time and will make battles interesting throughout! 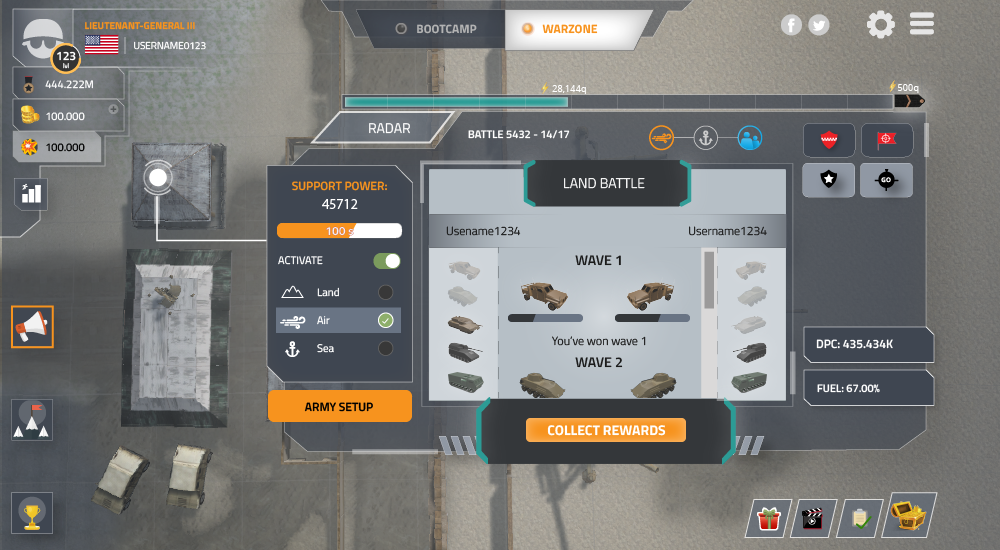 Since you can’t micromanage everything, your units will wage these battles on their own, and you will be able to see how they are fairing in a real-time simulation!
As in real world, random events might happen in simulations that might turn a fight around… even if you are losing or winning. It’s never over … until it’s actually over…

Every PvP battle fought (lost or won) will reward you with a PvP point, which you will be able to use to specialize your support units in several areas. Upgrades will give you bonuses in PvP battles, support power or DPC.
However, winning a PvP battle will grant you an additional sizable score boost based on the strength of your opponent. You will see these as simulations, but you must understand that it’s your actual units waging these battles – and win or lose, you might face some loses of your support units.

The PvP battles will help shake up the rankings and challenge you to adapt your strategies if you want to maximize your progress. As you might suffer some support unit loses, battles will also affect your War Zone progress – but in the end it’s well worth it as the bonuses you will get from fighting will make you that much stronger for all future battles to come!

We hope this gets you as excited for these upcoming changes as we are, and if you have any further questions we’ll be more than happy to share more details about how it will all work! :)