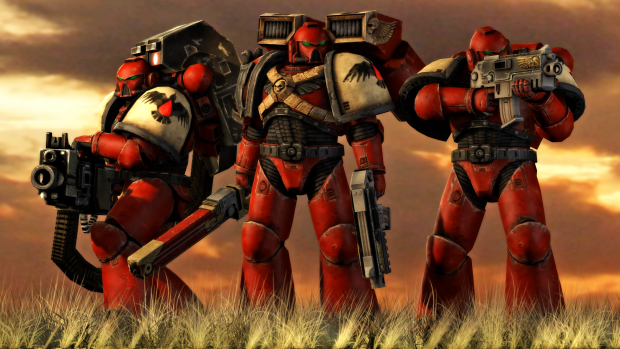 There should be nothing in it to upset a virus buster. Than again, Avast recently mistook Battlefleet Gothic : Armada as a virus.....

that so never knew that it did that to battlefeet goth armada. :O

also when I tried to exstract the files from the zip to the retubution game my tower turns off. :( any advice on that or is there a better way of doing that? also it takes several minuets for it to even show up the data for exstraction?

That may be due to a low amount of Ram?

Its a 7zip, not a standard zip file , you may need to install 7zip.
Also, what tower turned off? There are no towers in game beside IG one I think.

i think he meant his Computer tower

Hey there,it's a very awesome mod.But there are only two things bothering me,first thing is the speed of the units and second when I play the mod there comes a error (183) that says failed to create dump file.The error has been bothering me the most.Can you please help me ?

Do you have any other mods? Is your dow2 up to date with necron stuff?

Sorry I forgot to log in,that was me who replied to you,the one with the deer pic.

I'm not sure, Dow2 is infamously unstable with mods.

Could you post a pic of your dow2 folder please?

Also, is your game version English? it gets buggy if not.

Imgur.com English version, but in other mods i gor numbers at name of new units

Oh, I may know what is happening. The install seems fine, but the shortcut only works with the standard steam pathing.

Please try to run the mod with going to steam, and selecting Retribution , going Properties, and adding

I think. Or opening the Astartes.bat in a txt editor and editing in your full directory patch there!

also i think the broadside suits need a huge nerf who needs melee when 4 of them can decimate a swarm of orks. including battletruks

I can look into it, however they are a bit fragile. If distracted by cheap fodder, high damage units should be able to wreck them.

I don't know what causes the SM bug. Its one of the thousand SM models. Can't fix it, and nowdays almost any PC can run Dow2 on Ultra textures. You can keep every other setting on minimum.

I love this mod, we're playing at it a lot with friends but we wonder if you ever intend to "balance" it. The mod is a lot of fun, but you have 0 chance of winning playing the Orks against Marines for example. We would love to see balance coming up !

Is there also a place where we can follow the developpement or discuss about the mod ?

Hope you'll have time to reply !

Were you two playing normal mode or high resources? On Normal mode, the marines are really hampered by their expensiveness, and you can have 5 fully upgraded shoota squads for every space marine squad easily. Space marines are OP but rare, and every dead space marine sets the faction back.

I do think the orks are in a bad place, especially against early tyranids/tau. Tau just melt them, and nids can do AOE supress very well.

Hey ! Thank you for the reply.

Nah, we play with normal ressources. We found a strategy to have a chance against the Marines but it's pretty brutal, you have to rush ASAP the tier 2 of your base. The main problem is that the base unit (Slugga and Shoota) do literally nothing to Marines (they regen faster).

Their health is Ok but i do think you should up their damage (especially Slugga). It would be a good idea to offer to the Orks an unit against super heavy infantry that doesn't cost too much power (it's the main ressources issue we're having here.) The Nobz are also too squishy IMO !

Another question, the main weakness of these hordes army we found is the time you have to spend to reinforce every unit once they are damaged. Is there a way to toggle auto reinforcement ?

We also find that every army unless IG who are fine with that should have more defensive options to secure their point especially with the AI always sending single little unit to capture undefended point. (That's where the Marines are weak at ! But no player plays like that !) The turrets unless the IG one are pretty weak for their cost.

About the ressources, even by focusing on it, we're having major problem with these armies

I don't know if it's an issue, it's just to let you know everything we're experiencing. Just know that when you're having a Power issue, it has been yet almost impossible to come back into the game (vs AI).

About the strength of faction so far :

That's the ranking we've been experiencing so far.

Thank you for your reading and we hope it helps.

Chaos and Marines should have both resources as problems.

You can auto reinforce by right clicking on the reinforce icon.

Do that and keep Trucks/Chimeras close by to keep the hordes big and distracting the enemy from your damage dealing units.

This really is an awesome mod, good job man.
The only thing that I think brings it down a bit is the unit movement speed, reducing it a bit would make this mod perfect.

I'm afraid that's a feature, since a lot of these races are faster than humans.

Space marines got a runspeed of 1 kilometer per minute.

I'm sorry, I can only read English.

HI guys!!, does anyone play this at multiplayer, please send me a friend request for some fun casual warhammering!!!

Hey, whenever i start up dow it crashes instantly ive done the whole -modname astartes thing and i still crash
Any Help

I managed to get it to work but was a little curious if you could add something similar to the popcap mod for this.Me and my friend like to mess around with lots of units and this mod would be so fun with that.

The mod already requires a lot of computing power. Anymore units and there would be few pcs in the world that could run it without a massive framerate drop.

Kinda silly question, but is it/will it be possible to make your own chapter with the Black Templar models? Same goes for any chapter that gets special models.

Not really unless you edit the army painter files and than the space marine EBPS files to give them the intended look.

I've installed the mod about a week ago and after trying it (i do like it) i cant go back to the base game with out uninstalling and reinstalling the base game.

Just reopen the Zip folder, and find and purge every file in the zip from your base game archive

You should be able to do the basegame without even needing to delete anything.

Just don't use the .bat file to start, but use the normal exe instead.

Hi, Im trying to play this mod and I get to the loadscreen but whenever I select last stand, it CTD, what am I doing wrong? I did all the instructions of extracting the folder into dawn of war 2 retribution folder and i set it to -modname astartes and i have all the dlcs. Can anyone help me?

Can you please tell me how your dow2 retribution folder looks? List the folders and such please.

Its literally a clean insteall of DoW retribution with all mods. Then I just unpacked your mod into the folder. The folder path is program files, steam, steam apps, common, Dawn of War Retribution. What happens is campaign works fine but if I click The last stand, it ctds.

Also, do you got any other mods installed? What language is the installation in?

yeah, the end of it is Dawn of War II - Retribution, i dont have any other mods installed and language is in english

I think it may be best to reinstall. Use 7zip if you can please. If that does not work , find the warnings.log in the dow2 folder in your documents and post it here please.