Install the mod into your main Dow II retribution folder.

Readme file included with Credits and instructions. Run either with Astartes.bat, or go to your Steam, go to Retribution, go to Properties, set launch options as "-modname Astartes" ,without the ""s. If this does not work use the Astartes exe.bat .

I recommend setting graphics to Ultra high before installing or mod may crash on space marines.

Races , tactics, and units: Space marines heroes all have a separate race attached. 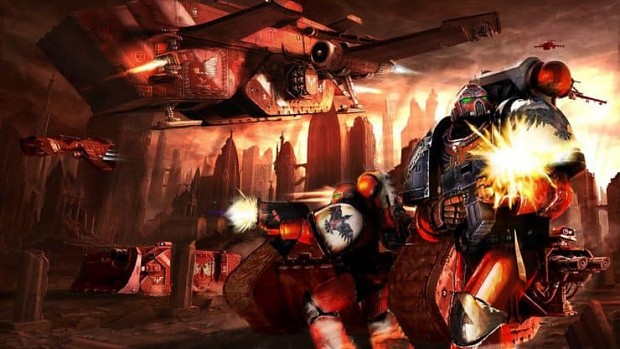 Say I'm curious what is the difference between 2.1 and 3.0, I'm currently downloading VotBR3 and just want to know what to expect. Also, this update was a surprise but a welcome one to be sure, hope you creators are doing well little by little and day by day.

Universal changes: All vehicles/walkers have gained increased health. All terminators (with the exception of heroes) are now 10 man squads and can now be equipped with 2 heavy weapons, but their cost has also been increased as a result. New fx's for lot's of weapons such as SM special ammo, GK psycannons, tyranid deathspitters and devourers, volkites, grav weapons, and so on.

SM: A bunch of new land raider variants, new weapons for predator and Razorback, functioning hunter-killer missile launcher option for all SM and legiones astartes vehicles with the exception of Predator and Land Raider, new tier 3 primaris eradicator squad, new tier 2 honour guard squad, intercessor limit increased from 1 to 3. Many other improvements and bug fixes, but that would take forever to list.

CSM: New Mark-specific terminators such as khornate terminators for Chaos Lord, Tzeentch terminators for Chaos Sorcerer, and Blightlord and Deathshroud terminators for Plague Lord. Terminators have also gained new weapon options such as combi-meltas, soulreaper cannons (Tzeentch), and daemonmauls (Khorne). Functioning Havoc missile launcher option for all Chaos vehicles with the exception of Land raider and predator. Mark-specific land raiders and predators have gained new weapons fitting for each God such as quad sponson autocannons for Khorne, Blastmaster sponsons for Slaanesh and etc. Many other improvements and bug fixes like SM, too much to list here.

Orks: New model for Ork rokkit turret and a lot of bug fixes. Not much have been added to Orks in this update, but still something.

Eldar: Not much love this update. Autarch could gain a forceshield default ability and wave serpent improved weapon models in a future update.

Tyranids: Not much love this update apart from a new double devourer option for carnifexes. Neurothrope could be added in future update.

Thank you Khoran
thank you :)

I have been having crashes when fighting Chaos, and I've noticed that their basic unit, the heretics appear to be just floating torsos. Any solutions for this issue?

Which chaos army did you use?

Sorry for the delay, I just noticed your response. I can confirm that everything appears to be fine in multiplayer with all 3 chaos leaders, but in the campaign the issues are appearing (aka headless/legless heretics and such). If the campaign doesn't work with this mod active, I must have missed that in the description and I apologize in advance.

Yeah this mod doesn't work with the campaign due to balance issues and me not having touched them.

I can fix this, but since the campaign is a copy paste I would need to alter the Scars scripts to account for each race and I'm not even sure its possible. Right now for example 2 tactical squads or 2 ig squads will face the same 2 chaos squads, which isn't good at all.

Small inconvenience that I hope you might be able to point me in the right direction, or perhaps resolve with a patch later on?

My issue is after a pretty hectic battle, it can take up to an hour to get to the stats screen, but usually around 20 minutes. I don't have a top notch PC, but its nowhere being a pos, can run most games max settings just fine.

Is there a possible workaround for this besides turning my pc off? Especially if I want to save the replay.

No, I am afraid this is due to the engine compiling statistics or such because I noticed that the more enemies are killed, the longer it takes.

As I can't exactly rewrite the exe itself this is beyond all current modders abilities I feel.

I appreciate it, no worries. That's what I was thinking as well, but wasn't entirely sure, and was hopeful.

Amazing mod either way, nothing quite like drowning Chaos Marines in endless waves of guardsmen.