REQUIRES A NEW GAME IN ORDER TO WORK! ~ * Increased the bullet speed of the FN P90 "Shark". That weapon is thus no longer underpowered. * Fixed the high probability of crashes when talking to characters about what they have to offer you. This vanilla feature now fully works again. * The VSA Val "Crow" weapon now has less chances to jam. * The squad holding the Minigun bunker near Limansk's entrance now belongs to Army. Not only does this seem more logical, but also prevent the Bandits faction from turning enemy to the actor during these main quest events. * Greatly reduced the loudness of the ambient sound Controllers constantly make ingame. * Removed the two help PDAs. * Removed few Human NPCs' respawn points, making the game a little less intense at certain areas, but specially increasing the overall stability of the mod. * Decreased once again the respawn rate of the various squads attacking the Loner base at the Agroprom Institute Research. * Various fixes and improvments. 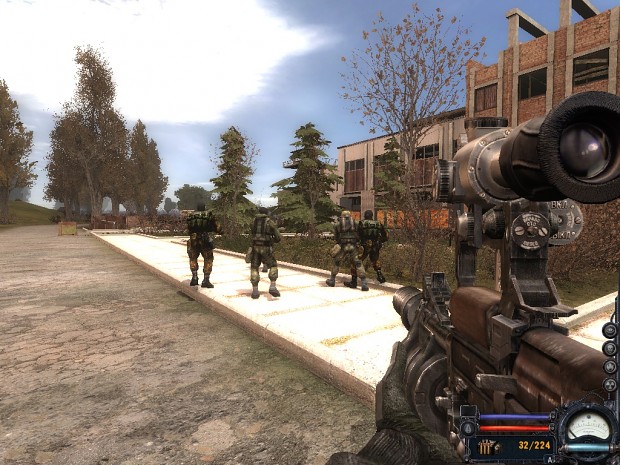 I have a weird problem, when I aim through the scope with for example SVD I have a part of black screen missing on left and right. Do you know what could be the problem?

Could you upload a screenshot on some image hosting site, please? Also, what is your screen resolution?

Here is the screenshot

Yeah, that mod wasn't made to support such high resolutions... But I'm going to build a little add-on that should fix it.

Ok, this file will let you use scopes properly on higher screen resolutions: Mediafire.com

Unfortunately, owning a very old screen (year 2000) I'm clearly lacking of knowledge in that area of modding. Regardless, I'm going to try to find a way to make a similar file for *really* high screen resolutions. But before all, I'd be curious to know whether this small fix already solves your problem or not.

Unfortunately it made it worse

Please get this file and place it in the "wpn" folder: Mediafire.com

Then try using your scope ingame with the same weapon. It should work or I don't get it.

No, still nothing. Now I see only a quarter of scope. I'm going to try it several more times.

Actually I managed to solve the problem. The problem was in gamedata folder in config folder. There is a xml file called "scope_16". In it I changed the width and height of scopes according to my resolution, and it know world like a charm. Btw great mod

You should be modding for me!
Glad to hear that you got it right :)

I get this error in swamp, any idea ?

sorry my mistake I reinstalled the game and works well, by the way good mod

I'm having your identical error in the mission "Catch up with ***", how did you solve the problem?

This patch is currently not available for some unknown reason. Until it gets fixed, you can download it on Mediafire.com

I just got an fresh copy of both the retail version of the game and the mod 1.0 if I want to patch it up with this one, does that mean I will have to download and install all previous patches before using this one?

Yes, all previous patches are needed. Note that a brand new 2_0 version of the mod with countless improvements and fixes will be released "soon".

I cant play CS without Complete. Lately Ive been looking for a mod with good weapons to integrate. For Personal use only I must say Hopefully I can do that here :]

2_0 version will include even more unique and amazing weapons, so your "personal use" of them will go even further!

is this mod running on the latest version of Clear sky ?

Hi, I'm having this crash, can you help me please?