Hello, fellow modders! Wolf and I are proud to introduce a new modding project taking place in the Stargate universe: Stargate: Battlefront! It shows the battle between Tau'ri and Wraith. You can fight in huge space battles which we want to make as varied as possible, so you as player have to gain different goals to earn the victory for your faction. The base ship of the Tau'ri will be a heavily armed battle carrier: The E.S.F. SOL. In its huge hangar bay it carries a massive number of fighters and bombers. The Wraith base ship is nothing less than the giant Hive itself. Other than in vanilla Battlefront II you will be able to fly not only small fighters and bombers but also you get also the chance to command an escort ship to support your fleet with massive firepower.

This mod lets you dive into the Stargate universe.
You can fly around with several Stargate units. Soldiers are still using stock
models for now.

Make sure to select GCW space assault when you play, the others won't work.
This map is still pre-beta, so keep that in mind. The AI is lacking planning
and a lot of stuff is not complete yet.

Modes: Currently GCW space assault only.
Do not attempt to use other modes or eras.

You can also control big frigate ships. If you want to do that go back in control room
close to the seats. The following screenshots shows the regions that will get you into
the frigates: Abload.de
To leave, simply fire their secondary weapon.

The timer signals the arrival of a second Wraith destroyer. Note that will not see it in the
final version. Again, a lot of stuff is WIP, the friagtes tend to move very unnatural etc.

Put the SG1 folder (which includes this ReadMe) in your Addon
folder in your Star Wars Battlefront II\GameData directory.
If you don't have an Addon folder simply create one.

By default it should look like this:
C:\Program Files\LucasArts\Star Wars Battlefront II\GameData\Addon\SG1

The map is still pre-beta so a lot of stuff needs to be done.

If you want to use this mod or parts of it for whatever purpose
(redestribution etc) please contact us first.
Do not use anything without permission. Thank you. 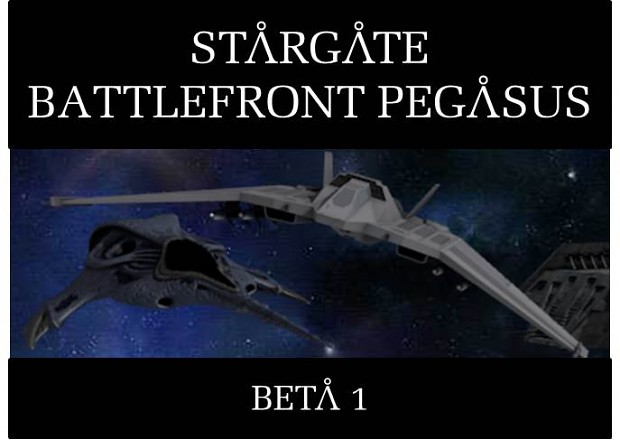 Very nice ! I love playing Wraith frigate :p But it not enough strong (for now ^^)

next step is to bring in the Hive ingame, but it´s friggin huge... that will be a challenge

make sure that Battlefron2 is up to date, the latest patch should be 1.3

and you unzip the paket to the right folder, on the end it should look like this:

the multiplayer don´t work yet, only singleplayer.
another reason could be, that you got to many ModMaps -> move some maps temporarily out of your addon folder.

how do i make the map compatible with my BF2? it crashes, and from what i heard, i need to update, how do i do it?

this is awesome, keep it up :D

Any plans to add Goa'uld?

or any other Stargate villain, it would be the same for me, just give us anything SG. This IP still needs a good game.