Maintenance release. New game required unless migrating from SRP v1.0.7 or above.

+ Conclusively fixed the issue where the Swamp faction war could come to a standstill due to the leader of a Clear Sky squad headed to the Machine Yard assuming the role of the guide at the Southern Farmstead.
+ Fixed the issue where the Red Forest bridge lowering sequence would become unlocked as soon as the player completes the task to "Go to the army base" rather than only after the player has transmitted the coordinates to free Leshiy's squad from the space bubble.

The full version history, as well as installation instructions, can be found inside the download archive. 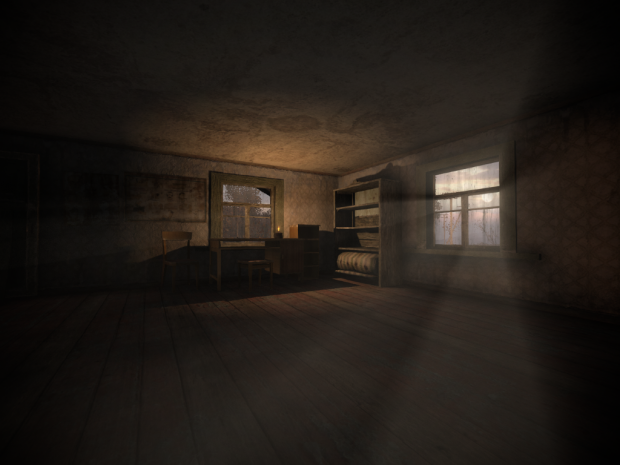 It's good to see an update here, Thanks a lot.

I got it working, but why is this running poorly? I can run every stalker at many hundreds of frames per second and this barely reaches 50 consistently? Not to mention startup takes many times longer than with the branded cutscenes. What's wrong here?

What graphical settings are you using? SSAO and Sun Shafts are very poorly optimized in this game and do not scale well with hardware, so consider setting them to 'Low' or disabling them altogether if you haven't already.

The SSAO performance on 'High' is especially atrocious with Float32, which ironically improves the performance of the other two settings (allegedly).

Aside from NMC's graphics pack, what other mods is this compatible with? Thanks.

What kind of other mod are you looking for?

I guess the more detailed and complex, the better. :D

Anything, really. Something with graphical updates and gameplay changes. :)

The SRP is compatible with most graphics mods, but gameplay mods are unlikely to be compatible because of the vast number of files the SRP alters.

However, several of the larger 'overhaul' mods have a version of the SRP integrated, e.g. Complete, Arsenal Overhaul, Road to Limansk. You could pick a mod like that if you want more extensive changes than the SRP itself offers.

Liking your mod so far.
I have noticed that the prices of items in the purchase window (Sidorovich) are more than the popup window shows when moused over, e.g. the Colt1911 popup info says it costs 1500ru, but when I add it to the purchase window it then costs 3000ru. Why is this happening?
I haven't made it further than this to test others.

The mouse-over info shows you the 'market value' of the item, whereas the trader window shows you the final price the trader is willing to sell it for after applying a markup unique to him. I agree that this can be confusing. I believe this behavior is present in all three S.T.A.L.K.E.R. games.

Decane1, what graphic settings are you using for your screenshots?

The maximum possible, with Float32 installed. I may have used -smap4096 on the executable, too; I can't remember.

Hog (quest character) might be bugged. When speaking with him, the dialog reaches "Such fun...", clicking on it would persistently crash the game. GOG version, if that is important.

I am using the Arsenal Overhaul mod, Atmosfear v1.3, the SRP v1.22 patch for AO, and finally my Tourist's Delight mod. The last of these alters the upgradeable items to full accept all of their respective improvements at once.

My first guess is that this is my fault...but, I vaguely recall having played up to Hog's conversation years ago with CS Complete, and run into the same brick wall. No additional mods on my part.

Setting aside the issues with Hog, I also had problems with the faction wars. I played as Loners to put down the Bandits and then switched to Freedom. When I began to clear out Duty, I found that Freedom would take some positions, but spots claimed by stalkers would prevent Freedom from navigating the maps. By killing off stalkers in key positions, I freed those positions and allowed Freedom to take territory. It is my hope that SRP could resolve the gridlock in a friendlier fashion.

The Hog dialog crash is down to the character_desc_military.xml file included in AO not being based on the one in the SRP and my not noticing this when creating the patch. The fix was posted in the comments section, here: Moddb.com

As for the faction war, there is already a feature in the SRP whereby stalkers are "forbidden" from entering or remaining on any camp in the Garbage or Agroprom to which Freedom is headed when the player is a member of Freedom.

If the stalkers are not leaving camps that have been rendered "forbbiden" to them in this way, they might be grid-locked into those camps by all surrounding camps being overtaken by non-hostiles.

I suppose I could further improve this system by attempting to detect such "blockers" at nearby camps and attempting to give them the boot, too, to make way for the stalkers blocking Freedom's progress...

Maybe neutral or friendly factions could share the same locations? Mind, if an NPC has to walk into a specific position that overlaps with another character...well, that possibility would be a dead end. They might simply end up "orbiting" the target or playing musical chairs.

Another thing that I noticed: In the Freedom base, there was an NPC on the second floor by the bar who was always asleep. This NPC is a squad leader, so he would also be a potential quest giver. Unfortunately, NPCs that are doing certain activities will refuse to speak until their activity is completed. The sleeping NPC never woke up throughout the course of a day or two. (Via sleeping bag.) Shooting in the air didn't rouse the fellow. Maybe a grenade would do the trick?

Concerning the faction wars in Agroprom, the left side of the Stalker building has an issue for whoever defends it: NPCs could spawn on the roof, unable to see or fight the bandits at the base of the building. This essentially locks up that spot, until the player clears it out. Sometimes bandits can reach the area with the shop keeper and other NPCs, who won't respond to the presence of the bandit.

During an emission in Agroprom, the two renegade prisoners could end up being teleported onto the roof above them.

At the Freedom base, the loudspeaker's music and conversations can be suddenly cut off by moving out of range. It probably should be a bit more gradual. I expect this behavior to be the same for other loudspeakers.

Concerning grenades: When the player has no grenades and picks one up, they automatically switch to them. Blew myself up to bits a couple times when picking through the dead. Not having this would be nice.

Dragging bodies has two issues, one which I enjoy and the other that I detest. What I dislike is how dragging is very easily lost, leading to much trial and error, with many repeats. The other is that corpses do not gain weight from their inventory. I can go to the Cordon base, take down all the troops, then stuff one body full with the loot. From there, I can drag it all to Sidorovich in one trip.

While I was trying to figure out how to add all gear to bartenders, I found an issue with Arsenal Overhaul. There are five items that would crash the game if a merchant attempts to generate them in their inventory, but this only happens when opening the trade window. Here are the items:

I am guessing that they were removed by the developer, who accidentally left some loose threads.

Noted, but this is not SRP related.

Yup. To top it off, I messed up. My mod used the vanilla Barmen's buy list as the basis for the supplies and sell list, but the silencers came with an extra space.

Is this compatible with Mystery?

Hello, I can't find this info nowhere. Do I need SRP if I installed MIRE mod? Or is it included in MIRE?

As far as I know, no version of the SRP is included in MIRE, and the SRP is not compatible with it, either. Use one or the other, not both.

So this is already included in Clear Sky Complete and I don't need it seperately?

An ancient version of this (from ca. 2010) is included in Complete, yes. It is missing about 90% of the fixes in the latest version.

Thanks. One minor bug/inconvenience I just noted: I got the mission froM Wolf to rescue Drifter in Cordon. Guy wound up dead before I could reach him, ergo I can't get the coordinates for a stash that contains a PDA that is wanted by the Cordon mechanic. It's not really important but a bit sad, even if only because now I have a sidequest that will be left unfinished. Any way to fix this without starting a new game and going for prefilled stashes? I guess not, right?

I would reload an earlier save and retry the mission. There is no other way to get the stash info you're after than from Drifter.

I added mod SRP 1.1.2 and I am having a hard time finding out how to add Arsenal Overhaul 1_2 without replacing the files that SRp 1.1.2 has. Can anyone give me instructions. I checked all over online and youtube but none help when it comes to combining mods.

Where do I extract this to?

The readme file explains that.

I installed the mod, it is a great job it seems. However I am unable to do some side quests... As sugested I started "New game" but still I cannot find items for sidequests e.g. tere is no modified PM in any stalkers corpse to give back, there is no Stone Flower in the Stalker corpse to give back, cannot complete the quest to fight and hold the place beside the truck in the North-East etc. Everything I mentioned is in the Swamps of course. It is a known bug of this bug-fixing mod or what? I installed the mod as written in Readme and any other stuff like ballistics, ads is working fine. Thanks for any help.

What you describe are definitely not known bugs and should not be happening. Can you send me your savegames, please? Also, are you using v1.1.2? Do you have any other mods installed?

I have no idea why you decided having tracers on all weapons was the realistic way to go, but it bothered me so much I made a small mod changing that among other things- Nexusmods.com

Great Work, Thank you so much!!

Whenever I save a game and go to the Load Game option in the main menu, there's nothing there. Can somebody help please?

Is this the last update ? are you still working on this Project ?

No and yes, respectively. See Github.com.

You'll probably have a more enjoyable experience with the GitHub master branch than with v1.1.2. If you do encounter issues, report them to me and I'll fix them.

Damn i see you still working on the Sky Reclamation Project !!! nice.