Another release candidate for v1.9. This version removes some demo-detection code which was causing issues for some users when trying to start a new game, and also localizes the "you discarded a combat knife" message, so that it can be translated by a localization file. This atop the existing improvements for compatibility with the new HDTP Beta, as well as the new "lootable containers" feature.

v1.9: - I'm back, baby! Almost two years since the last update. Whoops.
- HDTP: Added support for the MASSIVE number of new meshes/textures added by the HDTP beta relase. Only things I couldn't do were the new textures for Flamethrower effects and part of the changes for Flares. These had to be omitted because the resources can't be dynamically loaded like others, meaning for me to add them I'd have to make Shifter such that it required HDTP to run. I also had to omit the MJ12 Trooper mesh for the time being due to an animation issue which would actually cause the game to crash outright if you happened to look at an MJ12 Trooper who was sitting down.

- Fixed a bug that was causing Ketchup Bars and the like to appear at people's feet in TNM. Turns out it was also occurring in the normal game as well, it was just going unnoticed. The problem, if you care, was that I forgot a "break" statement in NPC Random Inventory and there were instances where it would spawn TWO items, the first one being completely forgotten while the second was placed in NPC inventory.

- Added a new feature similar to NPC Random Inventory: Container Random Inventory. Certain containers have a small chance of being given items if they would otherwise be empty. You are't going to find anything amazing from this, but you might come across some minor health items, consumables, or maybe even some ammo.

- Also related to Containers, I have made certain Containers able to be opened. When interacting with them you will first check their contents and take them into inventory, if applicable. Anything you don't will be dropped at your feet. From that point you will be able to pick up the items as normal. This currently only applies to trash cans, mailboxes, and wicker baskets.

- Added a tiny bit of code so you can't accidentally step on Cats and Cleaner Bots, subsequently killing/destroying them. I mean, JC isn't THAT freakin' clumsy.

- Fixed a bug in my code for the Received Items window which caused ammo pickup amounts to incorrectly display the total amount of that type of ammo you have on you, rather than the amount which had been added to your total.

- Switched around a little code in the function that controls you looting dead bodies for weapons/ammo/etc. No changes in the end result; the code changes just make sure that certain bits of code are only run when their output actually matters, i.e. no sense calculating ammo amounts when we aren't giving the player that type of ammo anyway.

- Added code so that when you pick up a weapon containing ammo it also lists the ammo you receive from it in your log.

- Fixed a long-standing bug with Lamps in Deus Ex. If they defaulted to on they would have an appropriate glow around them, but would not change the actual lamp object's glow and whatnot.

- Fixed another Deus Ex bug, this time with Containers. Carrying anything like an ammo crate or similar while going across a level transition would reset the contents in the box. The box's contents will now be stored prior to travel and restored after.

- Also fixed a variant of the above for barrels, which in this case would turn into plain boring barrels on level transition, as well as Datacubes, which would lose all text/images/whatever.

- Finally fixed the glitch that would give you two instances of prods, pistols, and medkits when you started a new game without quitting the old one. Turns out an existing DX function that is supposed to empty your inventory doesn't actually do anything.

- Fixed a few minor issues pointed out on the Shifter SVN. One was a bug with the ill-used Skull Gun aug that prevented you from getting any points from kills made with it. The other was not exactly a fix: some NPC-specific weapons like Gray Spit and Greasel Spit aren't useable by the player, as in even if you cheat to get them they won't work. I've added code so you can. You dirty cheater.

- Included a French localization file created by modDB user Babeuf97, as well as deusex-m. This should provide a translation of Shifter's new and modified text for any French fans out there. The file is DeusEx.fra. If your game doesn't load it automatically you can simply rename it DeusEx.int.

- Removed some code in the New Game screen left over from abandoned features from a few versions back. The code may have been causing some crashes that users were experiencing when trying to load the game. 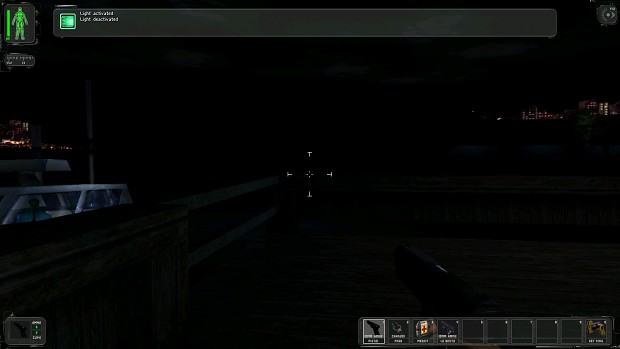 HAHAHAHAHAH Made my day XD

I love all the stuff which is being done here. Thank you, amongst other modders, for keeping one of my favorite games alive!

Yes, this is going to keep Deus Ex alive for alot longer to come.

Now if only Biomod was updated to take this update into account. Sadly until then I can't use this :(.

Excellent mod, thanks for the work.

In the NYC Sewers, whenever I go on top of the dam, jc denton stops responding to any and all keyboard/mouse input.

This surely must be a glitch with this mod...

IF you are using HDTP With the MAjestic 12 models set to on,and you come in contact with a seated MJ 12 trooper,he might even be just out of your sight,this can happen...see aforementioned bug in this pages description of the mod..It's a probably a problem with the MJ12 trooper.
Are you sure it isn't The HDTP mod,Go to settings,HDTP Settings,Set Majestic 12 models to off and try the same area,Let me know,,
I havent installed this version yet,so I don't know if the HDTP settings Sub Menu is built into the mod where applicable
I don't know how to code animations onto models,but maybe someone who does can copy paste the seated UNAtco trooper animations over the seated MJ12 animations,It might work to fix the model on an otherwise excellent mod,.

Would anyone help me please? I cannot get this mod to work, the Shifter.exe just won't appear in the system folder... Installed both 1.8.4 and 1.9

There is no Shifter.exe. This only replaces your DeusEx.u file. You run the game as normal.

How do you know if it is running correctly?

I have the 1112fm patch and gotye. (My gotye seems to have an older launcher somehow, and doesn't recognize mods without the 1112fm patch.) I've moved the files to system folder. I don't see any differences.

I've tried both v1.8.4 and v1.9rc1. The only notable change after install is an initially wacked out resolution setting.

Oh... nvm.
It says Shifter under the main menu. =P

Probably already reported, but there seems to be a problem with the way Shifter handles some HDTP detection, since without it installed currently blood splatters cause *massive* slowdown. An easy way to test this is to gib a hanging chicken corpse in hong kong - it immediately results in about 1.5 seconds of 3 frames. Installing HDTP resolves this, but I personally prefer the old models.

Please improve the precision rifle a bit, I can't decide whether to swap it for my heavilly modified sniper rifle or not. Mine has way higher damage, 10 rounds in a clip, silencer and a laser sight. I'm not sure if I'll even be able to gather that many upgrades till the end of the game, from the beginning of Paris...

I get an error message after completing the mission on Liberty Island (while entering UNATCO HQ):
Failed launching URL
Can't find Class in File 'Class DeusEx.ChallengeManager'

im not sure if this is still relevant to you at all yuki but when using this version of shifter i get extreme drops in my frames per second any time im in or near a combat zone. not sure if this sounds like anything you can easily diagnose but i felt i should give you some feedback on it. otherwise i love the new features, particularly the lootable trashcans.

*this is particularly prevalent in TNM i noticed

I have a potential bug-report with 1.9 RC1; but it's posted on the comments section: Moddb.com

I'm not sure if I'm installing it right.

I've added the files to the system folder, but the only in-game difference seems to be JC's perspective (The ratios/resolution are outa wack). I've also tried cheats and cant seem to summon the new Shifter weapons, so I'm thinking something didn't take when I installed it.

Is there more to the install, or somthing...? I don't see any differences anywhere...

How do you install this mod with HDTP?