The mod at a Glance. This mod restores Helgen, allows all sides of the Civil war to control it and will allow you to become Emperor and go to war with the Thalmor in a strick Lore based Story line. Main features. A fully rebuilt and fully scripted Helgen to play in. Over 400 NPCs Over 1000 new voice lines 40 quests. Can become Emperor. Can go to war with the Thalmor. Helgen can be taken over by either Stormcloaks or Imperials. Specially extended Imperial Quest Line taking you all the way up to Emperor and beyond. Full blown Lore Mod. How to Start the mod Just enter Solitude via the main gate.

Ported across from Skyrim to Skyrim SE

The mod at a Glance.

This mod restores Helgen, allows all sides of the Civil war to control it and will allow you to become Emperor and go to war with the Thalmor in a strick Lore based Story line.

A fully rebuilt and fully scripted Helgen to play in.

Over 400 NPCs
Over 1000 new voice lines
40 quests.
Can become Emperor.
Can go to war with the Thalmor.
Helgen can be taken over by either Stormcloaks or Imperials.
Specially extended Imperial Quest Line taking you all the way up to Emperor and beyond.
Full blown Lore Mod.
How to Start the mod
Just enter Solitude via the main gate.

How to unlock quests.

This mod watches your progess in the Skyrim Main Plot, Civil War quest line and Dark Brotherhood quest line and unlocks missions depending on your progress. Simply walking through Helgens Market place to force the mod to check if new quests are available in the early part of the mod. Always seek out the commanders assistant in the Commanders town if you get stuck.

The later Imperial quests require all those quests be completed before allowing you to proceed.

The mod will adapt if you change sides during the Civil War, player choice is fully supported. 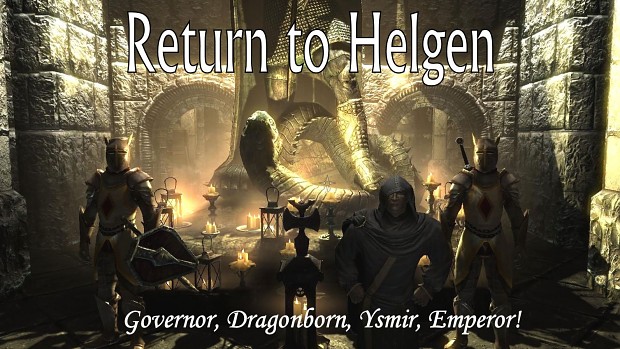 Is there a previous version of this that works with Skyrim with all DLC? I tried the special edition and was underwhelmed when comparing it to my heavily modded version. I'd absolutely love it if this had a SMIM compatibility plugin too.

Yes mate, its the other file linked to this mod page. There are 2, the SE and none SE versions. Have fun.

How do I unlock more missions?

I got this to work on SE. However I used the old Return to Helgen from Oldrim and I extracted the BSA, made a new 7z file and plugged this through the nexus mod manager. Worked like a charm. If you are crashing on any of these mods trying to get into Solitude for example. You might want to look up how to extract with the Bethesda Archive Extractor. I know it should work ect.... But it didn't for me from the Bethesda net site. I crashed at Solitude all the time. Now I do not, but I had to extract it myself. If more people have problems from the Bethesda net site, I might suggest a new file for them to download. However criticism is constructive, not punitive. Thank you so much for the mod, it is great. I would rate up 100% if I made an account. I really do love the mod.

The Skyrim SE version of this mod has been updated to address a crash when entering certain buildings that some (not all) users where experiencing. No version change because the mod has not actually been changed, just resaved in the editor. I know... weird but it works.

Did you delete this mod from Skyrim Special Edition for Xbox one I search it on the console then go to Bethesda.net search it and it says 0 results

Hi NanoByteGhost I would have send you a message but since i can’t do that i’m posting on the forum in the hope that you might answer. First off a great thanks for some bad *** mods you have made offering some very immersive enjoyable additional experiences in Skyrim, at least that is my personal opinion. I’m fairly new to the modding community and i am very sorry to hear about all the problems you have been experiencing with the websites that use to host your mods, i haven’t understood everything that has happened but i am no stranger to getting quality work stolen form you and i understand your problem intimately. I’m sorry for you but quite frankly i am also very sorry for myself, as there is currently no mod that interests me more than TEG Return to Helgen. I am fully aware you said you would not help anyone any further but since i have nothing to loose and i am dying to play your mod and i also noticed you said you would help people that would help you so here i am ^^ So here i am ^^ trying to convince you in any was i can to help me and others if you so wish in making your mod work.
I am currently playing the Skyrim SE edition of your mod and as i am sure you have heard, the game crashes systematically when upon entering solitude. I downloaded your mod with alternate star tat first but quickly realised that i was conflicting. So i started a new game specifically so i could try out your TEG Return to Helgen Mod. I therefor purposfolly omited to download: Open Cities AND Alternate start and i obviously have taken care not to download any mods that might modify helgen in any way. But my game still crashes. At first i used the file available on Bethesda but since it did not work i then used the file from Mod DB siote and added it via Nexus mod Manager. I also saw you said the USSEP might conflich so i disabled that too as well as removing loot but still no great sucess. To be perfectly honest i am out of ideas and am very frustrated at the thought of abandoning the whole thing altogether, because of the time i have invested but mainly because i really love the TEG Return to Helgen mod, and no one seems to have done anything that complete. Becoming the High King of Skyrim is intresting enough but certainly does not beat rebuilding anf governing Helgen to then become a DragonBorn Emperor !! Please NanoByteGhost Any tips or ideas? And don’t loose faith in modding because of cun…. That have nothing to do other than **** people off. I promise you your work has been greatly appreciated even if you do not wish to work on skyrim mods any further so in any event thank-you !

I WHOLEHEARTEDLY AGREE!!!!!!! I SEARCHED AND SEARCH FOR THIS FILE SPECIFICALLY AS IT IS A GREAT MOD!!! I WAS UNABLE TO FINISH IT IN OLDRIM DUE TO LOSE OF COMPUTER BUT IM BACK N ON SPECIAL EDITION AND THIS IS A MUST MUST HAVE MOD ALONG WITH TEG_SOLSTIEM < IM NOT THAT GOOD YET AT MODDING AND WILL TRY TO FOLLOW THE TUTORIAL ABOVE FOR CONVERTING OLDRIM VERSION TO PLAY IN SE< AS I HAVE NOT GOTTEN A CLEAR PICTURE OF IF THIS VERSION IN FACT IS WORKING CORRECTLY IN SE>>> PLEASE COME BACK TO MODDING< I KNOW OF THIS SITE NOW AND PEOPLE HERE SEEM MUCH NICER!!!! I WOULD LOVE TO SEE MORE OF YOUR WORKS> AS I SAID IM ONLY AWARE OF THE TWO TEG_ MODS>>>> IF THERE ARE MORE AVAIL TO B FOUND N DOWNLOADED HERE I WOULD LOVE TO BE ABLE TO DO SO!! PPL ON STEAM< BETHESDAS AND NEXUS ARE RUDE N I BEEN TRYING TO JUST USE HERE TO DOWNLOAD ALL MY SKYRIM MODS NOW>>>THANK YOU FOR SUCH GREAT WORKS AND IMAGINATION!! WE WOULD LOVE FOR YOU TO RETURN SOMEDAY!!!!

LE .bsa files will cause Skyrim SE to crash to desktop as the LE.bsa is different then the SE.bsa. Bethesda uses a different bsa formatting in the special edition. Any mod from Skyrim LE that contains an archive bsa must have the archive extracted and repacked in the newer SE archive bsa format.

Hello everyone after many hours of modifications and research i finally made it work, for all those who are having identical problems with the "Return to Helgen" mod and are having game crashes when entering solitude or helgen, feel free to contact me on my e-mail adress displayed on my ModDB account since the author stated he would not help anyone anymore. Where there is a will there is a way !

So how would I go about this I tried using oldrim and adding the SE bsa to the oldrim zip install and then I load but crash entering solitude I tried it the other way around still I crash and Now I'm at a loss I could really use the help.

i have a problem with the questline battle of helgen, because the quest objetive says defeat first thalmor enemy wave, the enemy horde spawns but when i killed every enemy the game not marks me the new objetive and nothing hapens and no more enemys spawns, i need help with this am stop i want to starts the emperor questline but i need finish this mission if anybody knows a fix for that bug am really gratefull whith him tanks to you if you read this and know the problem please let me know

If there is anyone around, I have just started a game (23h) of Skyrim, but I am looking for mods improving the civil war. I installed this mod, but my skyrim crashes after 2 sec. I guess that it s necessary to start a new game ? If someone can confirm me, thanks

is there a return to helgen for skyrim SE ?

The mod freezes or crashes simply because it is broken.
It's written in the title.
Broken by SE, avoid.
The author to stop taking care of it because of the majs of Bugthesda who broke everything.