This is the second technology demo of the open Outcast project. You don't need Crysis Wars to run it, the free Crysis Wars demo is enough. It isn't compatible with Crysis though.

NOTE: This demo does NOT work with regular Crysis! The free Crysis Wars demo is enough though, so you don't need any other game to try it (tutorial).

Your feedback is very much appreciated! You may check out one of our Oasis 1.1 feedback forums:

How about taking a survey on your experience with Oasis 1.1? 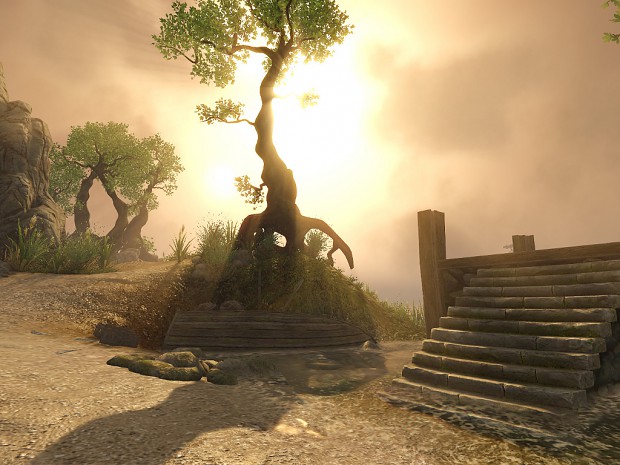 Does this work with regular Crysis?

No... but with the free Crysis Wars demo version =)

Hey man. Where to download "free Crysis Wars demo" from? Can you help please?

will this work with full crysis wars??

Why Crysis Wars? I uninstalled my copy ages ago...

Stunning graphics, great job on the mod. Everyone should try it!

Very promising for the future, but it is clear that some problems could be corrected easily. On optimization, I think it would really improve some points, such as dialogues that often produce delays and most importantly, are the textures of the characters is recharged each new camera shot.

Regarding the gameplay, there are good points, but the slow and simple dialogues missions makes the game a bit monotonous.

The theme music is very well done, even if I find after a while a little annoying and repetitive.

Finally, the level design needs to be seriously improved. It is my view the weakness of the game as some places on the island where he must find 5 (I can not remember the name, and besides I have not found what it was), a part of the island is simply sloppy, it does have nothing, not even a bit of grass and thought it was rather ugly, given the quality of the surrounding elements, such as objects, the little house and all small details.

In short, a working mixed. First, it's great art, the camera system, the facial animation, the dialogue system very well thought out and interact with characters made this project a promising mod. But the current weaknesses deserve to be addressed seriously, especially since these are details, but unfortunately are on task throughout the project.

But overall, it's just stunning to see how fast you work. And the result is really excellent, despite some shortcomings. Anyway, congratulations, it's a great job and I look forward to more!

Thanks a lot! We released oOC 1.1 in a somehow unfinished state because we wanted to show that it's possible to do the things with the Crysis Wars SDK we were talking about for so long (dialogue system, travelling etc) - therefore it was also only a "tech demo" and not a real "demo". The Leveldesign is one of the weak spots so far, it will be adressed in the upcoming releases.

Regarding the 5 Sankaar: They can be found in the Oasis region, not on the island! If you ask the fisherman (Loras) "where to find a sankaar", he will tell you that ;)

hey i downloaded this and i keep getting error reports. what would you suggest to do?

Not sure if anyone has contacted you, but if they haven't; please go openoutcast.org/board/ and report it there.

and what happened to this ?

We released a final version of the game in April 2017. It's based on CryEngine 3. The further development was ceased.

Hi. Where to download "free Crysis Wars demo" from? Can you help please?

You could have a better, improved CryEngine 3-based version of the game from our downloads section. Alternatively, if you want to play an old CryEngine 2 demo, there's a Crysis Wars trial on FilePlanet: Fileplanet.com

thanks for reply a year later :) where have you been :)