Dragon Rising Mission Editor allows players to create their own missions for single player, multiplayer and cooperative game modes. The editor is real time, meaning no pre-render of the work is needed, users press a key and can drop into the mission 'live' to test out or play. Overview Operation Flashpoint: Dragon Rising Mission Editor is a software program developed by Codemasters. The software is designed to connect to the Internet and adds a Windows Firewall exception in order to do so without being interfered with. The primary executable is named OFDR.exe. The setup package generally installs about 5 files. Relative to the overall usage of users who have this installed on their PCs, most are running Windows 7 (SP1) and Windows 8. While about 70% of users of Operation Flashpoint: Dragon Rising Mission Editor come from the United States, it is also popular in United Kingdom and Hungary. The editor needs to be fixed, it has a 64 entity limit meaning you can only spawn 64 troops total.

1.Is there a way i can have the tanks 'hold fire' until they reach a certain waypoint?
2.Can i assign names to the rendezvous points somehow?
3.Can i have the PLA stay where they are? Or must i use waypoints/how?
4.Can i have the PLA hold fire until the US tanks reach a certain position? (like an ambush?)
5.Why does my heli blow up, it did it twice, along with a PLA transport heli that i 'test flew' on another map. (does it give a lock on sound if PLA have AA missiles?
6.If i put waypoints in buildings, will they enter the buildings?
7.Can i have the AI 'move fast' to a waypoint?
8.Can i do a mix of #4 and #7?
9.Can i have US tanks not notice enemies until a certain waypoint? 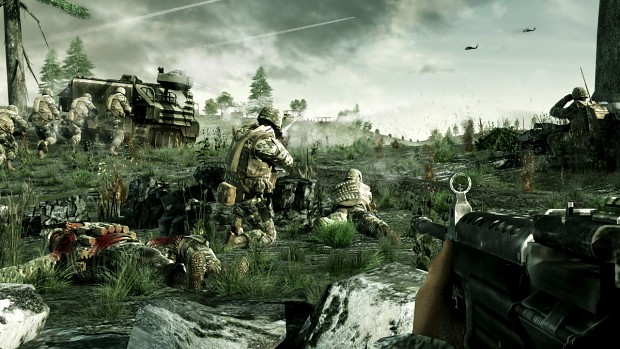 What is this supposed to be exactly? It looks like a mission file to me.