This tutorial has been archived by the uploader because it is out of date and no longer supported. We recommend you browse the file list for the latest tutorial.

PLEASE READ the full version by downloading or for a nicer version by clicking the read more+ link.

Tweak the bioengine.ini:
(This will fix many normal maps in the game without requiring TexMod.)
This file is located: "x:\Users\xxx\Documents\BioWare\Mass Effect\Config"

**Note any typos will break the game and cause crashes so be careful here**
All mistakes can be fixed but if you avoid typos it will save a headache in the long run.

The mod will also install new shadow shaders made by Daemonjax @ the Nexus sites (thank you Daemonjax for the great new shadows) These shaders will implement proper soft shadows and fix the wacky shadows of Mass Effect 1 :)

Now we are ready to download the mod:
DOWNLOAD ALL 7 PARTS of the mod from Moddb. Now EXTRACT ALL 7 PARTS into the same place of your choice and run the ME1UITM.exe. Follow the instructions of the installer. In 5-10 minutes, once the installer has completed, run Mass Effect like you always have and enjoy the mod :)

Mass Effect with or without the mod can crash and have issues!!!!!!! The most prominent issues and crashes are:
1 Hardware sound issues. These will cause random rendering thread exceptions and crashes. There are pages and pages online of people with this issue back to 2008. Google is your friend here. Usually a fairly simple bioengine.ini fix, which will vary depending on your audio hardware.

2 AMD processors (bulldozer or later chipsets) this is because Mass Effect is seeing AMD and looking for 3D now instruction sets that existed when it was made. AMD has ditched these instructions in their latest processors causing miss timings and faults in communication between Mass effect and the CPU. Due to this you will see black textures for characters and have potential crashes/general instability.
link to the bug:
Link
video of the issue on unmodded game with workaround fix:
Link

SEE MASS EFFECT TROUBLESHOOTING FIRST!
If all is well, check your bioengine.ini for typos as they will cause rendering thread exceptions, missing mip level/lod/texture loads and many other random crashes. Or delete your Bioengine.ini and run the game, this will create a new one and will guarantee its free of errors.

If you still have errors, make sure you have applied LAA to MassEffect.exe

If you have a 32-bit OS LAA can help, but you need to allow 3gb usage in 32-bit Windows:
"Run Command Prompt in the Accessories program group of the Start menu. Make sure to run as Administrator manually even if you are an admin on the computer, it requires extra admin rights granted by right clicking and running as an admin). At the command prompt, enter: "bcdedit /set IncreaseUserVa 3072" (without quotes)
Restart the computer"

2. MY SHADOWS ON FACES ARE BLOCKY, I DON'T LIKE IT:
You didn't clear your shader cache before running the game because the shadows from Daemonjax completely resolve this problem.

There are 2 ways to clear the shader cache.

1) Find your install directory:...\Mass Effect\Binaries\ and run MassEffectConfig.exe. On the left hand sidebar, select the Repair option. Click the Delete Local Shader Cache Files button. That's it, you can close the config program and start the game normally and it will load the new soft shadow shaders.

2) Find your My Documents directory: x:\Users\xxx\Documents\BioWare\Mass Effect\Published\CookedPC\ and delete the file named: "LocalShaderCache-PC-D3D-SM3.upk" That's it, you can now start the game normally and it will load the new soft shadow shaders.

3. BLACK/MISSING TEXTURES (not the black character bug on Noveria):
This is a result of an incomplete install: Check your "CookedPC" folder after installing the mod it should be at least 16.7 GB (some languages/regions may be larger) anything less means you will have missing textures, usually this happens as a result of not running the installer as administrator or using a previously modded Mass Effect as a base install. If you cannot get the install to the full 16.7GB or more, there is a work around. When the installer asks for your Mass Effect folder instead, point the installer to a new folder you have created, run it, and then copy/cut and paste all installed folders, should be 11.2GB, into your Mass Effect folder and say yes to overwriting.

4. SHIMMERING TEXTURES:
To get these to work I had to force some textures to load at full lod 4096x4096, since no one has released affordable 4k monitors I'm guessing your running resolution will be lower than the source texture, and due to this you will see shimmering unless very close to the texture. A fix is to force SSAA (ATI/AMD cards) and SGSSAA (Nvidia) these options with high enough setting should stop the shimmering or at least minimize it. Texture affected: Garrus face, Garrus' visor, Wrex's face. Without these fixes their textures would be black, missing, or extremely low res in certain and/or all parts of the game. If you use Nvidia the new DSR feature also works well to minimize shimmering.

5. BLURRY FEMSHEP ARMOR/FACE TEXTURES IN CHARACTER CREATE MENU:
This is a trade off, currently ME3Explorer has trouble with a few textures in ME1 (which isn't surprising as ME1 was after thought for the program), this issue directly relates to the shimmering texture issue, however I had so many complaints about the N7 armor that I decided to leave the mips in. The low res in the character create menu is the reason for the mipmap fix in the first version of the mod. Now the armor and face will not shimmer in game but will look blurry in the character create menu only. In the rest of the game, all menus etc... the textures render properly. When/if ME3Explorer gets a fix for the issue I will update the mod. 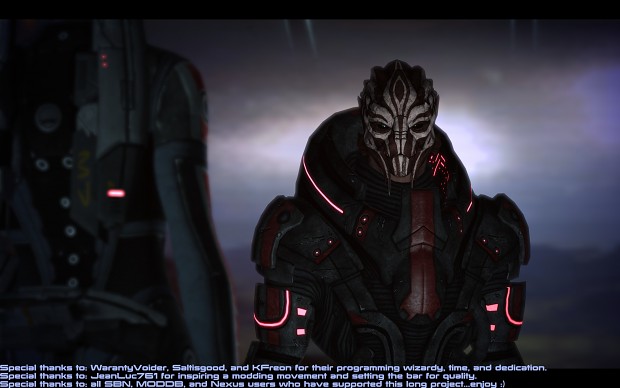 Required patch: No brows fix extract the file into your Mass Effect folder and say yes to overwrite

Use this if you find your NPC's are missing eyebrows