Leia Organa Solo (born Leia Amidala Skywalker), a Force-sensitive Human female was at various stages of her life, a politician, revolutionary, and Jedi Knight of the New Jedi Order. The daughter of Jedi Knight Anakin Skywalker and Senator Padmé Amidala of Naboo, Leia was the younger twin sister of Luke Skywalker, and, shortly after her birth, she became the adopted daughter of Bail Organa and Queen Breha of Alderaan, making her a Princess of Alderaan. An accomplished Senator, Leia Organa was most famous for her strong leadership during the Galactic Civil War and other subsequent galactic conflicts, making her one of the galaxy's greatest heroes. Later she married Han Solo, and became the mother of their three children: Jaina, Jacen, and Anakin Solo. Around the start of the Swarm War, Leia unknowingly became a grandmother through Jacen's daughter Allana. 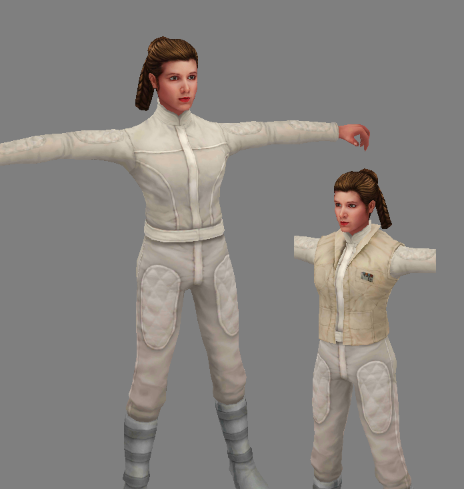 Oh man, this is awesome! Thank you very much!

do you know where I could find a lot of kotor assets and possibly a Coleman Trebor or Pablo Jill model?