Kanan Jarrus, born Caleb Dume, was a Force-sensitive human male Jedi Knight who survived Order 66 during the Clone Wars. Living on thanks to the sacrifice of his Master, Depa Billaba, on Kaller, he met the smuggler Janus Kasmir, who taught him how to survive as a fugitive. Going into hiding, he forsook the Jedi ways for some time, swapping his blue-bladed lightsaber for a blaster. After working with the Twi'lek rebel operative Hera Syndulla during the Gorse conflict, Jarrus decided to join her nascent rebel cell.

Kanan Jarrus with lightsaber (for modders)
Converted by Teancum

CHANGELOG:
*Fixed an issue with the lightsaber 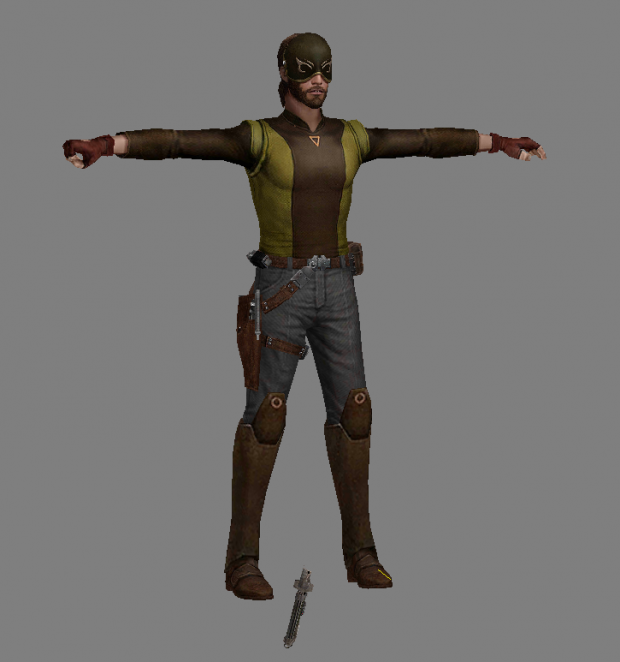 Do you have one of non blind Kanan, like from season 1 or so? If not no worries, I appreciate your work endlessly

I don't. I would have preferred that, but the only one I could find was on JKHub and I'm not totally sold on his face

No worries, thanks a lot for all your hard work! Warb_Null made one for empire at war which i got working in game, but it's super low poly so this one might be better even if it's a bit off chronologically with what i was going for

EDIT: I also just noticed that, at least with using luke's animations, when using melee sometimes some polygons seem to disappear and you can see through parts of where the arms meet the torso, and where one of the legs meets the torso. I opened it in xsi and it looks like where the upper arms arent connected to the torso directly in the normal way, and that seems to be causing the problem, but it's worth noting that I'm very inexperienced with modelling and may be way off on that. In any case, still a great improvement on the low poly kanan model I had before.