Pure Heretic Only experience focusing on Better Heretic Monsters via LAGI's Mellow Heretic monsters mod. This is an Addon mod for Heretic. Load Heretic as the IWAD/or first then this file. GZDoom can read zip files. Heretic Heroes is a gameplay mod meant to recapture the difficulty and fun of adventure and movement from old NES fantasy adventure games. Heretic Heroes is a heavily randomized event full of adventure from some destructable scenery to the randomness of RNG being cruel on weapons and items drops, or even super fruitful. There are 11 heroes from various games and each was designed to roughly match their physics of those games if they were from a Platformer, or some of the humorous growth if from a RPG. Some Characters start off way better than others in order to capture the essence of the games they came from.

Heretic Heroes is a gameplay mod meant to recapture the difficulty and fun of adventure and movement from old NES fantasy adventure games. Heretic Heroes is a heavily randomized event full of adventure from some destructable scenery to the randomness of RNG being cruel on weapons and items drops, or even super fruitful. There are 11 heroes from various games and each was designed to roughly match their physics of those games if they were from a Platformer, or some of the humorous growth if from a RPG. Some Characters start off way better than others in order to capture the essence of the games they came from.

Without further adieu, here is the cast.
In order from menu:

1. Kuros: from Wizards and Warriors
2. Arthur of Ghosts and Goblins
3. Ava Tar from the Ultima Series
4. Conan the Barbarian
5. Erdrick from Dragon Quest
6. Hydlide
7. Zelda... yeah its Link but this is for humor too.
8. Sylpha the Elven heretic, genderbend Corvus
9, Imm Ortal- The nameless wizrd from THe Immortal
10. Dova Keen - Yes, its the Lizard Hunter
11. Simon - the Questor.. The Simon's Quest version

AUTHOR NOTE: --- My Advice: This mod has a custom difficulty settings.
It is HARD from Myth of Hilda on up even to me as it's creator.
If you want the most balanced experience then start as anyone other than Imm Ortal because he starts with no Mana, a spell book and weak Fists..
Enable Jumping and Crouching. Break every Candle , Barrel and Chest odd you come across because they are the source of weapons.
All Starter Weapon except Conan and Imm Ortal have Subweapons bound to Reload
THis game uses a Custom made HUD that has been tailored to Heretic Heroes.
Set a Chasecam Button: I've tried my best to make this fun as a Third Person game as well!!! Yes really! Everybody has minor transparency so you can see where you shoot or hit.

--Every Character has a SKILL bound to the Altfire or Reload reload key!!! I bind reload key to Shift. Every character has mostly unique abilities on the Castlevania styled Subweapons. Subweapons and Skills can only be used on the Starter Weapon of each character or some special Ultimate Weapons.

--Not every character can use every weapon, BUT they can get the ammo from them.

--All Weapons only use two types of Ammo and only give White Mana when picked up. Red Mana is generally the stronger attack on the weapon. The Trident is Unique in that it uses Health as its ammo, but also does Life Leech with its main fire.

--Subweapons all run off of Hearts at one per cost. Each Character generally has a unique version of each Subweapon type and only One subweapon can be held at a time.

-- This game uses HEXEN classes on the Characters, and comes complete with the Armor items for them. This game also uses Heretic/Doom styled armor too. The Blue gauge on the right side of the HUD displays all of the Armor info listed from top to bottom: Armor Amount, Armor Class, Armor Absorb value. You can frquently hit over 100% absorb and then all damage goes to Armor Amount.

-- This game uses Heretic Inventory so many items are available and unique. No tomes of power as those are replaced by a super item: Ethereal Armor. Set your controls accordingly.

Arthur- Fighter Class: This guy.... has the lowest health starting at 25, maxes at 50 BUT can go to higher with Item use. Excellent damage output, high jump, but squat all for equipment outside of Subweapons. I was nice enough to make his Main Fire auto-fire so your finger doesn't die.
Player.WeaponSlot 2, hammer2, Axe : The Axe is a superweapon.

Erdrick- Mage Class: To be fair, he not much of a Mage, and has that to represent his start in DQ1. He starts with a mean fist attack. Average movement and balanced weapons.

Zelda: Mage Class: His movement is like Adventure of Link and his weapons are like Zelda1. Low armor class at start, but he is one of the fastest and highest jumping dudes. His Bow is unlimited, but low Rail style damage on his Main fire, altfire is his sword. He also starts with Bombs which use Red Mana. His shield will deflect projectiles.
Player.WeaponSlot 1, Mastersword
Player.WeaponSlot 2, Bow
Player.WeaponSlot 3, Wand
Player.WeaponSlot 4, FragGrenade

CrossBow: a black crossbow with Green arrows. Main fire shoots 3 arrows with White mana. Altfire is an Elemental blast that explodes and freezes with Red Mana.

Shotgun: Uses ammo: Main fire is weaker at 7 pellets of electricity. Altfire is 20 pellets of fire damage(same as doom SSG)

Luciferian Crossbow/Impaler- Uses ammo: Main fire is a strong but normal xbow bolt with a fast firing rate. altfire is a stream of elemental energy bolts.

Hammer: Uses ammo. Mainfire is a flame thrower, but can still be used as a melee weapon if out of White Mana. Altfire is an explosive fireball.

Master Sword: NO MANA USE. ALLOWS SUBWEAPONS on Reload Key. Gives a Deflectiing Shield, a fast firing main fire melee, no autofire. Altfire is a Holy Red Boomerang like the Axe version.

LEGEND "The Dragon Slayer": NO MANA USE, ALLOWS SUBWEAPONS ON RELOAD KEY. Main fire is a fast swinging melee with a small arc. Altfire is a Wild Swing that hits many points and hits really dang hard.
Hydlide starts with this weapon.

MONSTER Cast: Too many to list and thats part of the exploration factor.

CastleVania Simons Destiny by Batandy
for Making this amazing game. Used heavily in this mod from Monsters to Enviromental stuff like Candles.

Hexen, and other Raven Software creations.

New levels : No
Sounds : Yes
Music : No
Graphics : Yes
Dehacked/BEX Patch : No
Demos : No
Other files required : Heretic and soon to be Doom and Hexen. 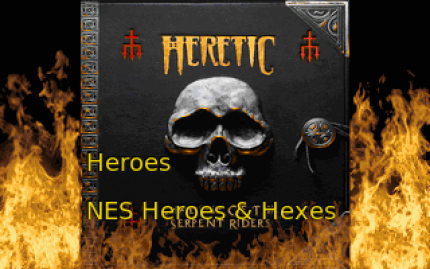