You ONLY need to have installed; "source SDK 2013 single player" and set to; "upcoming beta" OTHERWISE THE MOD WILL NOT WORK!! This is a fan made mod and is not meant to be taken as canon in any way, shape or form. And although it is loosely based off the Half-Life niverse and going on were Episode 2 left off, it is not always consistent with the Half-Life lore. This mod will start were the original Half Life2 episode 2 ended, with the death of Alyx her father. She became sick by the loss and layes in bed. Magnusson needs Gordon to look for Kleiner, because he has disapeared. The last time he did see Kleiner was when he spoke about going to the Borealis to blow the ship and everything inside up. Gordon needs to travel by airplane to the North pole and find Kleiner, and save the ship. Will you be on time? And will you find out what the secret cargo is that is inside the ship? This version 2.0 has some very small issues fixed, there are no major changes made to the

(seems that 7-Zip is not always extracting well, Winrar etc does. With 7-zip it can happen that the archive contains the mod content without the encapsulating folder, you will need to create one (inside sourcemods folder) then and name it "Halflife2-Episode3" (without quotes). But this error is very rare, and only happened ones to my knowlidge.) 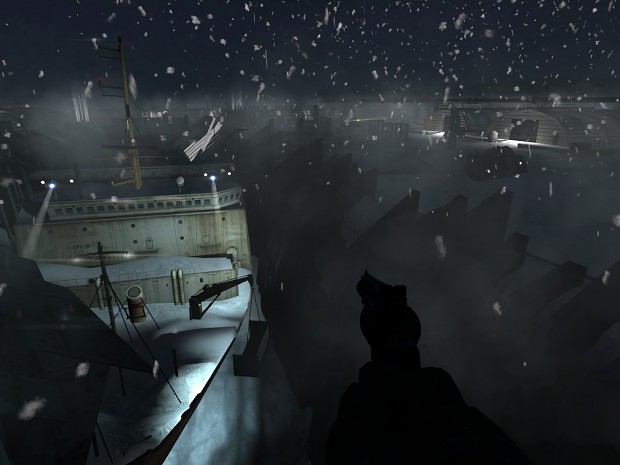 nice but sadly it wont work :( i tried to launch this mod but game just crashes ones load screen comes up, please fix this.

Great Job one of the best mods ive ever played, thanks for all the hard work!

i did it but it still crashes

Strange, i will sent you a pm so we can talk some more. Should someone else have problems then please sent me a pm,

How do I set it to "upcoming beta"?

rightclick on Source SDK Base 2013 blabla, Properties, Betas, and set Select the beta you would like to opt into to upcoming -.

you can use steam to open it

ive done everything in the instructions, it isnt popping up, i even restarted steam, and my pc, i also bought ep 2... nothings working!

Thanks Pbibapb, i had to use Google translate that says you wrote;
"The pleasure was indescribable, as the whole game modes."
glad you enjoyed it.

and please people make sure you have Source SDK 2013 set to upcoming beta otherwise this mod will NOT work. Please check the install instructions or movie to see how this is done. Its easy and quickly done, but, does need to be done in order to play this mod.

Love the "Begin the Beguine" track over the startup!

What should I do to make it work?please answer

Please read the install instructions !!!!!
(can't say it enough).
There very easy and quick to follow, and without the mod will indeed NOT work. In short, install Source SDK 2013 SP in "upcoming beta mode" !!

I have Source SDK 2013 installed and loaded on Steam and is set Upcoming. Mod crashes while loading. Please help.

hey has anyone have had this happen to you please reply, when I load it up its normal until it hits the loading screen and the game turns off right away can someone help and also I do have the source single player 2013 installed also on beta
-upcoming and it still doesn't work can someone please PLEASE PLEASE reply a comment for a fix please REPLY ;( I really REALLY want to play this game ;o

he hides this mod is broken

you know I was the guest
right

guys you need SINGLEPLAYER SOURCE 2013 ON -UPCOMING YOU GUYS ARE NOT LISTENING BECAUSE ITS WOKRING FOR ME :O

One simple question: The files I downloaded are vmf. files, and I placed them in the steamapps folder but the mod isnt showing up in my steam libraries. How can I launch the game?

Please do read the install instructions!!!!!
You did download the complete wrong file by the way, you need to download the mod itself, version 2.0, (not patch 2.0)

if you still have problems then please do contact me,

No!
you can play it without HL2 and or episode 2.
All you need is to have installed;
Source SDK 2013 SP.
Please just check the install instructions
very carefully. They are short and very easy,
but, you need to follow the instructions otherwise
the mod will NOT work!!

just check this short video to see what need to be
done to play this mod;


and again, HL2 and or episodes are NOT needed!!
have fun!

where is the installation instructions :D

Installation instructions can be found in severel places, for instance is there a really very detailed one in the mods readme.txt itself, and there are many links to install intruction videos, please just read them or watch them, or email me about them.

to make the mod work in short, install Source SDK 2013 SP and set it to upcoming and the mod works.
and you don't need HL2, or any of the episodes to play it.
You only need Source 2013 SP.

Please read next time before you ask because i have explained this at least 50 times!

When google translated it well you said;
"Tell me the name of the song at the end of the game."

well, the answer is;
group Sixx:Am
song; Van Nuys
(its about heroin adiction)

here is a video of them;

You can also download it from RTSL.com here;
Runthinkshootlive.com

give me save files please

I have the mod not installed anymore myself. But you can always watch walkthrough video's on youtube when your stuck. Or just open the next level manually through console,

This for free version Half-Life 2?

Yes, its free and you don't even need HL2 or HL2 episode 2 to play it. Just check the install instructions, its really easy to install and play. Most important, install free Source SDK 2013 SP and set it to UPCOMING. That is all, just check install instructions please.
Have fun!