In the first save, Tommy has 100 HPs, 150 for Health and Armor, has the in-finite sprint, and is fireproof. He has a lot of ammo for the best weapons in each category but hasn't done any main missions. I recommend using that save for the main missions up to "Phnom Penh '86." By the time of "Phnom Penh '86," missions have taken his .357, M4, and Minigun, so I replaced his ammo for those for a second save file. I recommend that as a belated starter save to base subsequent saves on. I used Alper Saracoglu's GTA Vice City Adminstrative Console to add EP/DP/BP/FP vehicles to garages. There's an optional handling.cfg file that mods the Sentinel (for "The Driver" and the "Sunshine Auto Races"), the Angel (it's also good for those races--it's like the competitors' bikes in "Alloy Wheels of Steel"), and RC Bandit (thanks to Demarest for the RC Bandit figures). The original handling.cfg is included for those who forget to make a copy of it first.

Update Feb.2, 2012: I raised the Hermes to be more like a stock 1949 Mercury
(I know it's supposed to be a lead sled, but in Vice City that means the under-
side hits curbs, etc., if it goes fast) and improved the handling for it for the
handling file in the "ModdedAndChevyHandling" folder. I added colors for it to
the carcols.dat file in the "1957Colors" folder. I changed the wheel size a bit
in the default.ide file in the "1957ChevroletBelAir" folder.

Update Jan.5, 2012: I added my "Legible Blimp" mod. I perked up the handling
of the Hermes a bit for the handling file in the "ModdedAndChevyHandling" fold-
er and made the wheels for it a bit bigger for the default.ide file in the
"1957ChevroletBelAir" folder. I moved the Chevy emblem to position it a bit
better on the grill of the '57 Chevy mod.

Update Dec.12, 2011: I changed Tommy's Armor to 169 and made a few changes to
the EP vehicles stored in garages. I chose the colors for EP Oceanics and Sen-
tinels with the Administrative Console. I recommend using the '57 Chevy mod for
the Oceanic, the carcols.dat file in my "1957Colors" folder, and picking your
favorite '57 colors for the Chevys with a Pay 'n' Spray.

Update Nov.28, 2011: I improved the accuracy of Coronado Yellow and made Onyx
Black a bit lighter.

Thanks to OnePiece for the advice about using Zmodeler, but I'm inexperienced
with it. I could use someone's help to change the .dff file to reduce the glare
(specular lighting?) of the exterior, make the colors for the engine and exhaust
pipes more realistic, and to move the dummy for the driver's position so their
hands are closer to the steering wheel.

- It's too bright--the side that faces a nearby light source looks bleached
out. For example, the side facing the light source in the Hyman Condo at night
looks white.

- I'd like the pale blue of the engine/exhaust pipes changed to silver/light
gray,

the yellow of the engine changed to medium gray,

and the black of the engine changed to dark gray.

- The dummy for the position of the driver should be moved a bit toward the
driver's door so their hands are at the steering wheel.

- The steering wheel/steering wheel post colors should be able to be deter-
mined by a color in the .txd file.

- There should be thin horizontal pinstripes of chrome on the off-white sec-
tion (that features the Bel Air logo) of each tail fin.

PS: I came up with a '57 dash trim plate of metal with little square black
dots on it for the tekstura part of the .txd file, but the game takes a bit of
it and expands it in a blurry way, so I couldn't use it and settled for plain
silver grey. I had a similar problem with the way the game renders my depiction
of the seats. Let me know if anyone can fix it. I've enclosed a 1957ChevyDash-
Trim.bmp file, 5 x regular size (because I'd work on the tekstura file at that
size then would reduce it back to regular size), of that section of the tekstura
part of the .txd file.

RanxeroX' guess about the blurriness: "It's probably happening due to the way
the textures are being mapped onto the model. From what you're saying, it
sounds like the textures are UV-mapped using tiling to fill the area. To fix
it, it would require loading the model into a 3d editor and changing the mapping
to another type and possibly having to create a new texture bitmap that has the
full detail that you're after. This sort of thing opens up another can (or
more!) of worms though...cuz you'd have to import the original, make changes,
export the model and then, if you want to release it as part of your mod, get
permission from the original creator."
Gtaforums.com
(GTW note: thanks again to Klarnetist for giving me persmission to distribute
his Chevy mods, and he liked the changes I've come up with so far. But he's
taken his work files and VC off his computer and isn't modding for it anymore.)

Update 4/10/2011: I added a carcols.dat file which lets you use some of the 1957 colors for the 1957 Chevrolet Bel Air, some different colors for the Sentinel, and school bus yellow for the Bus.
Update 9/26/2010: I added two optional oceanic.txd files after I modded
Klarnetist's 1957 Chevrolet two door hard top to give it the red and red-
speckled black seats of a '57 Chevy. One has 1957 Pennsylvania license plates
and the other has 1986 Dade county (the county Miami is in) Florida license
plates. 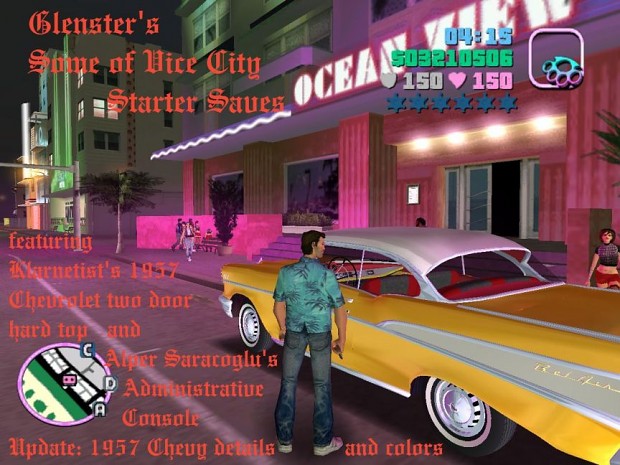 Lol i have made it by my self in my mod :P

where can i get this game