First part Mod Revolution Today, on February 8, in birthday of Jules Gabriel Verne also there began Russian-Japanese war-First part Mod Revolution-is available for downloading! The first part is devoted to the European Union and the USA. 2 generals of EU and 2 generals of the USA are presented. For EU part take: Commander Izabella Black - ordering air forces of the European Union. The general of Davil Richardson - the commander of elite parts of the European Union. On the party of the USA act: The general - William Adama - the commander of air forces of the USA. The commander Carolina Kurkova - ordering assault armored groups. The fleet - from technical vessels to the latest aircraft carriers (HMS-Queen Elizabeth and U.S. CVN 78 General Ford) is introduced. The team of developers presented to players completely perarabotanny world of ZH where are presented prototypes: 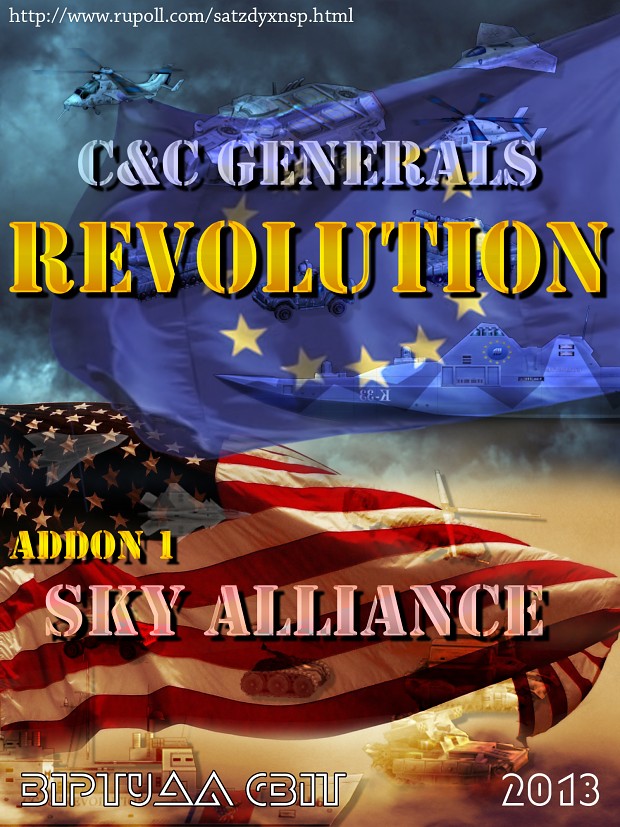 hey men i have trouble downloading uh if its finish can u upload it on kickass.to thanks

I was looking for the same thing here resheeshniya not found)) without reliable 10 seconds and all the destruction and loss was such that the boat could not stand, and he, too, defeated and I win) here is how to solve this problem> Creator

872mb! O.O
i hope its not heavy because of unused files which havent been deleted or heavy musics :S
is the whole 872mb game files for only first part? :S

this is really awesome :D but cant understand anything :D
when do you release the english language ?

why downland IS 704mb is erro

the mod is 872 MB, you downloaded only 704 MB, it means you failed to download it

sir where is the english version

Sorry, but why is the game in Russian even though i chose english o.O Really wanna play this mod :(

is there a english version?

this EXE generals.exe 96 KB will not starting,
i installed the First Decade Version.

thanks,but where is the english version ?

Sorry for some reason it will not load.

can you tell me how to install the mod friends ??

can you tell me how to install the mod friend ??

You should have Zero hour 1.04 - the latest version.

When i start the Skirmish it says You Are Victorious!

There's problem with scrolling on the game i have to click the map.Any fix?

Oops found out that my scroll speed on the game menu is zero my bad.

please guys I need your help cause I want to play this mod
THANKS!

When I try to install it it says "The setup files are corrupted".

is the game light or not?

nothing happen when install it how it work