For those who are still alive, the Firey Explosion Mod 2.6 Beta is finally here. This version of the mod includes improved explosion effects as well as few new features, such as aerial debris, few modified missile trails and slightly improved environmental effects. However, due to ridiculous code for aircraft dismemberment function (ridiculous even by my standards), this feature was left out until proper code could be devised (so you could expect it in the next release). The mod expanded a lot more than I initially estimated, therefore it's compatibility with other mods is questionable at best (though it seemed to work with BlackOpsUnleashed just fine). Anyway, if you want to use my mod with some other mod that doesn't seem to work together, just contact me, I may be able to help with that. So, thank you all for waiting and I hope you'll enjoy this version of my mod

Installation for the uninitiated:

Installation of the mod is quite simple: just delete the old version of this mod if you had it, put the Firey Explosion Mod folder in your Mods folder (if there is no Mods folder in your game's folder (usually located somewhere like "C: /Program Files/THQ/Gas Powered Games/Supreme Commander - Forged Alliance/"), then just make a new folder named 'Mods', and that will do.) Then activate the mod through in game mod-manager and you are all set. 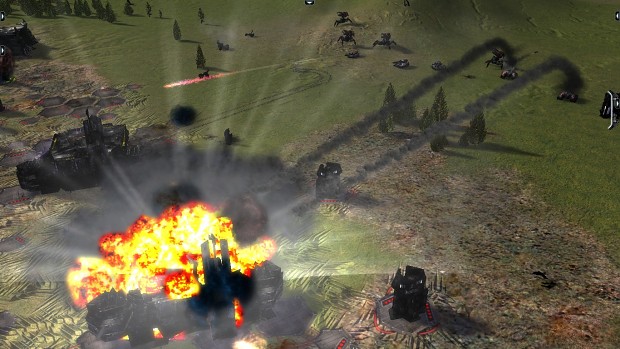 Looks great! Got a question though. I cannot build anything, if I click on a icon, nothing happens. What did I do wrong?

Hey ffy, i had this problem before. I dont know what caused it though. All i did was reboot my pc and supcom was working great again :)

Thanks for your answer burnie222, sadly that did not do the trick :(
Maybe I've got an conflicting mod, although the previous version was not giving this problem. Will try later.

Thanks for a great mod!

DL'd, played, looks great, thankyou! I have seen the effects in multiplayer/skirmish, Is there any way to have these effects in the sp campaign?

I love the look of this mod, but I'm having issues unpacking the .rar file. It keeps failing to unpack when it hits something called Medium_test_sonic.bp. Is there something wrong with the .rar?

In the project LOUD in the latest version of 2018. this mod is not defined