Overtime you've grown stronger; we gained access to weapons cache's, upgraded gear, developed new tech and even found lost artifacts of power to counter the endless waves of clones. Well we weren't the only ones who've been upgrading. Kevin has been busy, he's brought something new along, oh it's happened before, you know him as the Husk, and you know how to deal with him. This time though, this time it's different. Refined technology to counter a unrefined nature, a temper that out matches even the Fleshpounds berzerker rage. Once that switch is flipped even a raging fleshpound runs for cover. Funny, those two may have made a cute couple had things been different. Well I hope your new toys are up to the job because she isn't going to hold back. - Trader just before last orders.

Details
New custom ZED for Killing Floor. A Female Fleshpound, she isn't simply a a reskin, she has custom behavour and values to set her apart from the Fleshpound. She may be weaker, yet she is faster and a damn sight more pissed off.

Instructions
Download and install to your ...\steam\steamapps\common\killingfloor\ directory.
Select the game type Killing Floor
From mutators select Add Female Fleshpound
Launch game and enjoy. (Remember to come back and let us know what you think.)

This means we are after your feedback; balancing, bugs, glitches etc 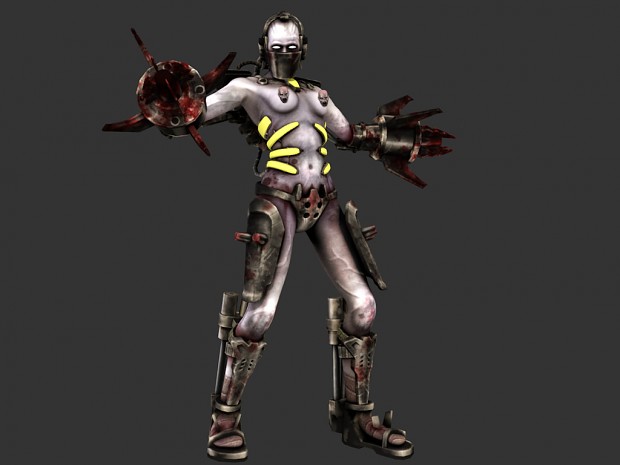 Although she's naked from the waist up, The model its self is very cool!!